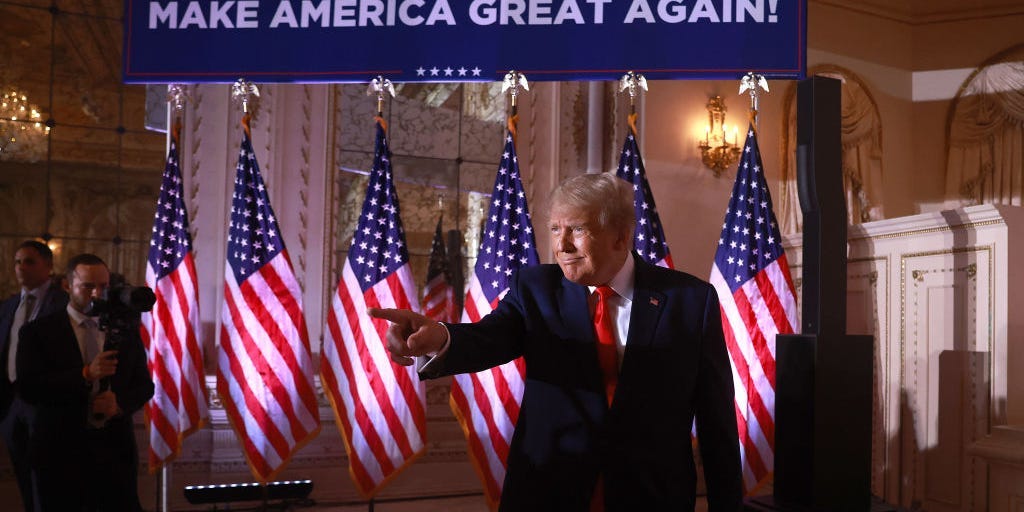 Donald Trump’s 2024 campaign has gotten off to a slow start, with the former president fighting legal challenges and abandoned by many former allies.

But Trump is said to be about to ramp up his efforts, seeking to cast his first term in power as a major electoral asset.

Trump unveiled his “National Greatness Agenda” platform when announcing his candidacy in November 2022.

It’s a mix of anti-immigration, economic and isolationist policies familiar from his first two campaigns for the presidency.

Mixed in are some new hardline policies apparently designed to appeal to his most passionate supporters while capitalizing on current GOP grievances.

Since his defeat in 2020, Trump has fixated on baseless claims that victory was stolen from him through mass fraud.

He has claimed, without evidence, that early voting and machines used to tabulate votes were manipulated as part of a plot by his political foes.

In his manifesto he is pledging to restrict voting to election day itself, to require paper ballots, and to also require ID from voters.

“We will do whatever it takes to bring back honesty, confidence and trust in our elections. To eliminate cheating, I will immediately demand voter ID, same-day voting, and only paper ballots,” Trump said at the event in November where he announced his candidacy.

The policy will likely concern some Republicans, who believe that the party has to embrace measures like mail-in voting to maximise turnout after a series of disappointing election cycles.

Trump has cited China’s Xi Jinping as the inspiration behind his hardline plan to tackle America’s drug crisis by arresting and killing the drug dealers.

“Every drug dealer during his or her life, on average, will kill 500 people with the drugs they sell, not to mention the destruction of families,” Trump said at his campaign launch. “We’re going to be asking everyone who sells drugs, gets caught selling drugs, to receive the death penalty for their pain.”

Trump has touted the idea since 2018, and as president lifted a 17-year moratorium on federal executions that saw 13 people executed.

The Republican Party since Trump’s 2020 defeat has fixated on so-called “culture wars” issues, including trans rights, the teaching of Critical Race Theory (CRT) in schools, and vaccine mandates.

Trump has unveiled a number of policies apparently designed to address these issues.

His suggestion for restricting CRT teaching is to abolish the Department of Education, a move analysts say would also require repealing the hundreds of federal laws the department oversees, and cutting the huge budget the department administers.

It’s unclear how much impact abolishing the department would have on curricula, with many of the education policies conservatives are railing against enacted at a state or local level, and therefore beyond the authority of the federal government.

On vaccines, Trump is on uncertain ground, having overseen the initial rollout of the COVID-19 vaccines himself in his last year in office.

But since then, anti-vaccine conspiracy theories and opposition to vaccine mandates have become a rallying call for the GOP hard right, sometimes putting him an odds with his base.

It’s an issue on which Trump could be outflanked by Florida Gov. Ron DeSantis, a likely 2024 GOP rival, who has endorsed anti-vaccine mandate measures in the state. Trump is apparently seeking to emulate them by repealing the Biden administration military vaccine mandate.

“We will abolish every Biden COVID mandate and rehire every patriot who was fired from the military,” Trump said. “With an apology and full back pay — and they’ll get it.”

Trump and his allies have long claimed that government “deep state” officials are plotting against him.

And in one of his most radical policies, Trump is proposing to issue an executive order that would make it much easier to fire federal employees and replace them with loyalists.

At a speech during the “America First Agenda Summit” in Washington, DC, in July, 2022, Trump promised to “drain the swamp and root out the deep state.”

He continued: “Congress should pass historic reforms empowering the president to ensure that any bureaucrat who is corrupt, incompetent, or unnecessary for the job can be told – have you ever heard this – you’re fired! Get out.”

Trump actually issued the order before leaving office in 2021, but it was repealed by President Joe Biden.

The allegation that social media giants censor conservative voices has long been an obsession of Trump’s, who was banned from Twitter and Facebook for his posts during the Jan. 6, 2021, Capitol riot (though was recently reinstated to Twitter by new CEO Elon Musk.)

In November, he unveiled a proposal to repeal Section 230, the federal law that shields tech companies from liability for harmful or hateful content published on their platforms.

Trump framed the move as a way of combatting censorship, saying that only companies that meet “high standards of neutrality, transparency, fairness, and non-discrimination” would qualify for Section 230 protection.