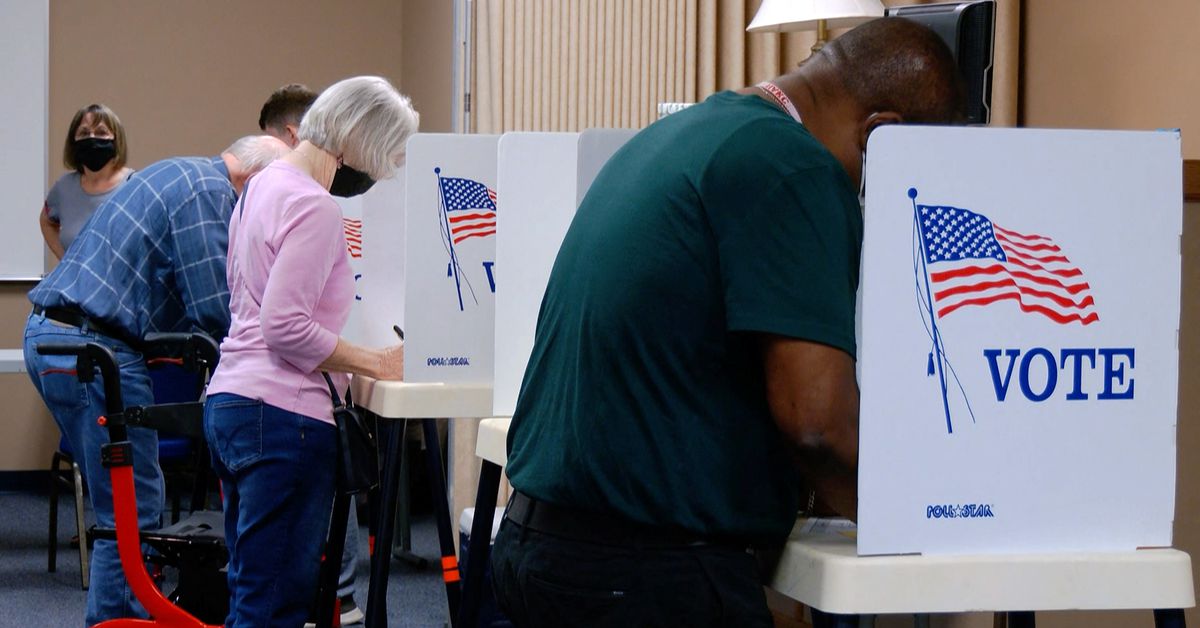 Aug 2 (Reuters) – Republican voters on Tuesday chose a raft of candidates supporting Donald Trump’s 2020 election falsehoods in multiple party primaries for the November general election – a stark display of the former president’s grip on his party.

The Kansas result suggested that anger over the Supreme Court’s June decision could help Democrats to galvanize voters at a time when many Americans are blaming Democratic President Joe Biden’s administration for soaring gasoline and food prices.

But Tuesday, one of the biggest midterm primary nights of the year, underscored the continued dominance of Trump among Republicans and widespread support for his false claims that the 2020 election was rigged. It was also a warning for any would-be Republican challengers should he seek the White House again in 2024.

In the key battleground state of Arizona, state Representative Mark Finchem won the Republican nomination for secretary of state, a position that would give him enormous sway over the conduct of elections should he prevail against his Democratic opponent in November.

Finchem was present at Trump’s Jan. 6, 2021, speech in Washington that preceded the attack on the U.S. Capitol by Trump supporters and has continued to assert that the former president won the 2020 election.

In Michigan, Tudor Dixon, a conservative commentator who has echoed Trump’s election claims, won the Republican nomination for governor and will face Democratic Governor Gretchen Whitmer in one of the most high-profile races this November, which will also revolve around abortion rights.

Kansas Attorney General Derek Schmidt, endorsed by Trump, secured the Republican nomination for governor. He will face Democratic Governor Laura Kelly in November in what is expected to be a highly competitive race.

Blake Masters, a former tech executive who has backed Trump’s false fraud claims, secured the Republican nomination in the Senate race, the Associated Press said, and will face Senator Mark Kelly, seen as one of the most vulnerable Democratic incumbents. Masters has Trump’s endorsement and the backing of tech billionaire Peter Thiel.

Gibbs, backed by Trump, was the beneficiary of Democratic advertising during the Republican primary, part of a risky and highly controversial strategy to try to elevate more vulnerable Republican candidates in swing districts even as party leaders warn they pose a danger to democracy. read more

Another Republican who voted to impeach Trump, Jamie Herrera Beutler of Washington, also faced a Trump-endorsed primary challenger. The results of that race were not expected to be known until later on Wednesday or Thursday.

Political analysts saw the rejection of the abortion limits ballot initiative as having wider implications for the coming general election.

With 95% of the estimated vote counted, just under 60% of Kansas voters had cast ballots in support of the state constitution’s abortion protections. Unlike the Republican gubernatorial primaries, Kansas’ abortion initiative reflected the choices of voters of both major political parties, as well as independents. read more

“When a total ban looks like a possibility, then you’re going to get a lot of people to turn out and you’re going to lose a lot of the more moderate supporters of abortion restrictions,” said Neal Allen, a political science professor at Wichita State University.

With Biden’s unpopularity weighing on Democrats heading into November’s election, party leaders were likely heartened by the Kansas result. Democratic candidates are increasingly coalescing around the abortion issue in some swing districts to fend off challenges by Republicans, who are favored to win control of the House of Representatives and perhaps the Senate.

Control of either chamber would give Republicans the power to stymie Biden’s legislative agenda while launching politically damaging hearings.

As he flirts publicly with the possibility of running for president again, Trump has endorsed more than 200 candidates. Most are safe bets – incumbent Republicans in conservative districts – but even in competitive races many of his candidates have prevailed.

“Trump remains really popular with Republican primary voters. I don’t think you can underestimate how he has remade the party in his image,” said Alex Conant, a Republican strategist. “Republicans who run against Trump tend to get trampled.”

Lake, a former news anchor, echoes Trump’s election falsehoods and has said she would not have certified Biden’s statewide victory in 2020. At a recent campaign stop, Lake claimed without evidence that fraud has already occurred during early voting, suggesting she may not accept a defeat on Tuesday.

This story expires at 3:46am on Thursday November 3rd, 2022 and will be deleted.