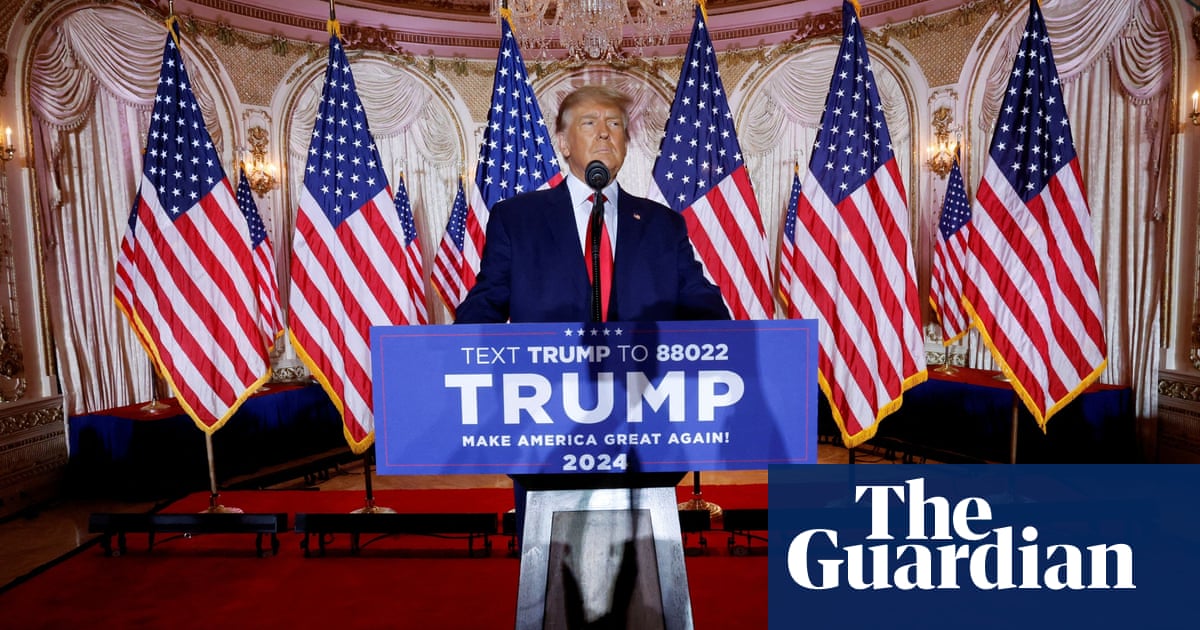 Donald Trump is not allowing the Republican party to move on from him – no matter how desperately some of its members want to.

Announcing his third consecutive presidential campaign at Mar-a-Lago in Florida on Tuesday night, Trump made it clear that he viewed himself as the only acceptable option for the 2024 Republican nomination.

“This is not a task for a politician or a conventional candidate,” he said. “This is a task for a great movement that embodies the courage, confidence and the spirit of the American people. The Washington establishment wants to silence us, but we will not let them do that.”

Some of Trump’s most loyal allies in Washington, such as the South Carolina senator Lindsey Graham, appeared all too happy to let the former president crown himself as the party’s chosen candidate to face off against Joe Biden.

“If President Trump continues this tone and delivers this message on a consistent basis, he will be hard to beat,” said Graham. “His speech, contrasting his policies and results against the Biden administration, charts a winning path for him in the primaries and general election.”

But the speech failed to win over all Republicans, some of whom expressed concern that Trump’s 2024 effort would repeat the failure of his 2020 campaign, when he lost the popular vote by 7 million and the electoral college 306-232.

The results of last week’s midterm elections intensified such fears, as many of the candidates Trump endorsed in high-profile races were defeated by Democrats. Politicians who embraced Trump’s lies about widespread fraud in the 2020 election, such as Kari Lake, the Republican candidate for governor in Arizona, fared particularly poorly.

“He needs to get independent [and] swing voters,” Mick Mulvaney, Trump’s former acting chief of staff, said on Twitter. “If he doesn’t he faces the same fate as many of his chosen midterm candidates: winning a primary and losing [a] general. And winning a primary but losing a general makes you a loser.”

Trump’s failure to unite the party was reflected in the Wednesday morning headlines of right-leaning media outlets. The National Review, a conservative site that was initially skeptical of Trump but came to praise his tax cuts and judicial nominations as president, ran an editorial with the simple headline: “No.”

The New York Post, long one of Trump’s favorite newspapers, summed up his Mar-a-Lago speech with the front-page headline: “Florida Man Makes Announcement.” The following news item insulted Trump as a “Florida retiree” and “avid golfer” best known for “gold-plated lobbies and for firing people on reality television”.

The brutal Post coverage comes amid reports that the newspaper’s owner, Rupert Murdoch, has told Trump his outlets will not support his 2024 campaign. Instead, the Post has joined many of Trump’s former supporters in embracing the Florida governor, Ron DeSantis. After DeSantis won re-election by nearly 20 points last week, the newspaper ran a headline praising him as “DeFuture”.

As media outlets turned their attention to other options for 2024, some major Republican donors have followed suit. Stephen Schwarzman, co-founder of the private-equity firm Blackstone and previously one of Trump’s most significant financial backers, said he would not support the former president’s 2024 bid.

“America does better when its leaders are rooted in today and tomorrow, not today and yesterday,” Schwarzman told Axios on Wednesday. “It is time for the Republican party to turn to a new generation of leaders and I intend to support one of them in the presidential primaries.”

Some sitting Republican lawmakers have echoed that eagerness for the party to begin a fresh chapter, with a new leader at the helm.

One anti-Trump group went so far as to release negative polling in the hope of convincing the former president to reconsider his 2024 plans. The day before the Mar-a-Lago event, Club for Growth, an anti-tax organization that previously backed Trump but has recently distanced itself from him, shared data showing DeSantis winning one-on-one contests by double digits in Iowa and New Hampshire, states which hold early nominating contests.

“Republicans need to be united behind a strong candidate and a platform that shows voters real solutions to beat Biden and the Democrats in 2024,” said David McIntosh, president of Club for Growth Action. “Our polling shows that Republican primary voters recognize Trump’s insults against Republicans as hollow and counterproductive, and it’s taking a significant toll on his support.”

Other polls suggest that Trump’s grasp on the Republican base remains as tight as ever. According to a Politico/Morning Consult poll taken in the past week, 47% of Republicans and Republican-leaning independents would support Trump if the 2024 primary were held today, a 14-point lead over DeSantis.

Those numbers indicate that even though many Republican donors and media outlets may be ready to dump Trump, the voters who will actually determine the 2024 nominee are much more hesitant to do so. Unless DeSantis or another challenger can shake Trump’s solid foundation of support, America could be barreling toward a 2020 rematch.