Former President Donald Trump is still the most popular and influential politician in the Republican Party and his endorsement in the 2022 cycle remains the most coveted, but the former president suffered new stinging defeats in Georgia on Tuesday.

Four weeks after a trio of statewide candidates Trump had backed in Georgia’s Republican primaries were demolished, two more candidates endorsed and supported by the former president were trounced in GOP congressional primary runoff elections.

But while Trump’s immense sway over the GOP took another hit in Georgia, his America First movement was once again a winner as the two primary winners were Trump-style conservatives who support the former president’s policies.

In Georgia’s 10th Congressional District runoff, Trump-backed Vernon Jones was bested by Mike Collins, the owner of a trucking company. According to unofficial results, Collins landed nearly triple the votes won by Jones, a former state lawmaker and Democrat turned Republican who was a top Black surrogate for the then-president in the Peach State during the 2020 election.

The district, which is reliably red, stretches from the exurbs east of Atlanta through rural areas east to the outskirts of Augusta and to the South Carolina border. Collins will be considered the favorite against the winner of the Democratic primary runoff in the district, in the race to succeed Republican Rep. Jody Hice, who launched an unsuccessful campaign for Georgia Secretary of State rather than seek re-election.

Collins gave Kemp a shout-out in his primary victory address, thanking the governor for his endorsement.

Even though Collins didn’t land the former president’s endorsement in the primary, he ran as a pro-Trump candidate. Collins describe himself as a “conservative fighter” and an “America First, Pro-Trump, outsider.”

The former president headlined a tele-rally on the eve of the primary for Evans, a former chairman of the Georgia Ethics Commission and son of Randy Evans, who served as ambassador to Luxembourg during the Trump administration.

McCormick was supported by conservative firebrand Sen. Ted Cruz of Texas, as well as the Club for Growth, a fiscally conservative outside group that spends heavily in Republican primaries. The race was the third high profile Republican primary showdown the past two months when Trump and Cruz — who could become potential rivals in the 2024 GOP presidential nomination race — backed rival candidates.

McCormick, similar to Collins, ran as a Trump-style candidate even while facing a rival endorsed by the former president.

It was a different story in neighboring Alabama on Tuesday night, where the Trump-endorsed candidate easily won the GOP Senate primary runoff in the race to succeed Republican Sen. Richard Shelby, who’s retiring after nearly 45 years in Congress.

Katie Britt, a former longtime Shelby aide who served as the senator’s chief of staff from 2016-2018 and who later became the first female president and CEO of the Business Council of Alabama, defeated Rep. Mo Brooks, who was one of Trump’s top allies in the House.

Trump backed Brooks last year when the congressman was the front-runner in the race, but the former president took back his endorsement earlier this year as Brooks struggled in the polls. And after criticizing Britt last year, Trump praised her as he endorsed her a week ago, after new polls indicated Britt surging.

But the endorsement put Trump in the odd position of backing the more establishment style candidate in the race, whose campaign was also boosted by allies of longtime Senate GOP leader Mitch McConnell, whom the former president has heavily criticized for nearly a year and a half.

Tuesday’s results come a week after Trump was dealt a split decision in South Carolina’s primaries.

Until last week, a Trump endorsed candidate had yet to knock off a GOP incumbent who had crossed the former president. But that changed last Tuesday as South Carolina state lawmaker Russell Fry convincingly defeated five-term Rep. Tom Rice in the state’s reliably red 7th Congressional District.

But the former president didn’t receive the sweep he was hoping for – as Rep. Nancy Mace held on in the GOP primary in the state’s swingy 1st Congressional District to defeat former state lawmaker Katie Arrington, who was backed by Trump. While Mace’s win was a setback for Trump, it was a victory for another potential 2024 GOP presidential contender – former two-term South Carolina Gov. Nikki Haley — who had heavily supported Mace. 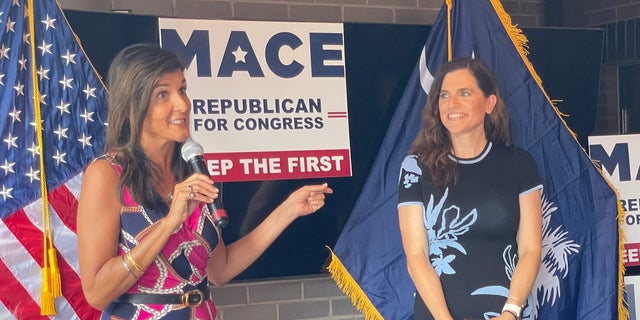 Trump made scores of endorsements this cycle, and the winning percentage of the candidates he’s backed in the primaries remains high. But many of those he’s backed were running in uncontested or non-competitive primaries.

In competitive races, Trump has suffered some high-profile defeats, besides his numerous setbacks in Georgia. While Trump’s endorsements were instrumental in the Ohio and Pennsylvania GOP Senate primaries, the gubernatorial candidates the former president endorsed in Idaho and Nebraska both lost.