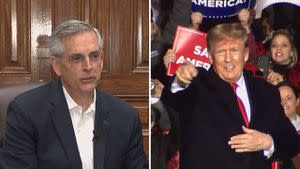 Former President Donald Trump is defending a controversial 67-minute phone call he made with Georgia’s secretary of state.

In it, Trump asked Brad Raffensperger to “find” nearly 12,000 votes following his loss in the 2020 election.

It didn’t take long for Trump to take to his new social media platform and defend that now infamous phone call to Raffensperger.

Raffensperger, his aide and a Fulton County election worker testified in front of the Jan. 6 committee Tuesday about the intense pressure Trump and his supporters put on them to overturn the 2020 election results.

Channel 2 political reporter Richard Elliot traveled to Washington, D.C., and was inside the hearing room as Raffensperger testified about that phone call.

“So look, all I want to do is just, I want to find 11,780 votes, which is one more than we have, because we won the state,” Trump was recorded saying during the call.

In a social media post, Trump called it “a perfect phone call to discuss a rigged and stolen election.”

Elliot spoke exclusively with Raffensperger minutes after he left the hearing room Tuesday.

He said his entire staff felt the pressure, but always wanted to follow the law.

“We swear an oath to it. It’s very important and if everyone just does their job and just let the chips fall where they may — but that’s just our job to do our job,” Raffensperger said.

But minutes earlier, Moss testified about the threats they received after Trump and his lawyer Rudy Giuliani both accused them of massive voter fraud in the State Farm Arena video.

Multiple investigations proved those allegations were not true.

That quote was in reference to lynchings that occurred across the South during that time.

The committee also wanted to know more about the fake elector meetings, including the one that happened at the Georgia State Capitol.