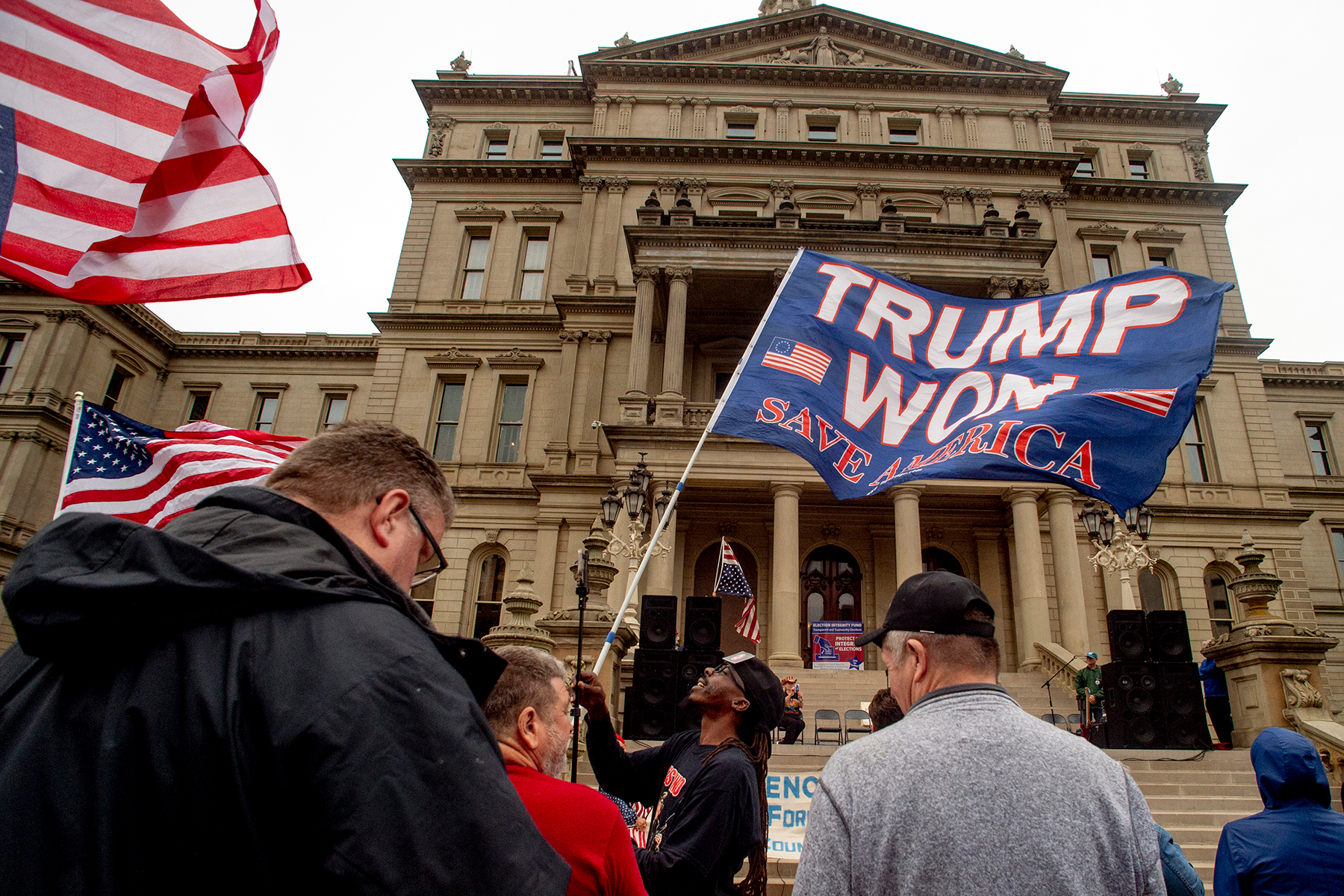 Michigan is a pivotal swing state in any presidential election, but the results last year weren’t particularly close. President Biden defeated Trump by over 150,000 votes, good for a difference of nearly three percentage points. Still, the state’s election results have been challenged incessantly by a group of conservative grifters trying to ensure they’ll never again have to stomach an election loss, democracy be damned.

The former president encouraged supporters to attend a rally the most prominent among them held outside the state Capitol in Lansing on Tuesday, and on Wednesday he released a statement attacking Republicans who have refused to support a forensic election audit like the one in Arizona — which cost millions of dollars and, of course, turned up no evidence of significant fraud.

“Why won’t they give respected professionals and representatives at yesterday’s rally the right to do a Forensic Audit of Wayne County (Detroit) and Macomb County?” Trump said through his Save America PAC on Wednesday. “That includes the RINOs in the State Senate and House who for, whatever reason, do nothing but obstruct instead of seeking the truth. Hopefully, each one of these cowardly RINOs, whose names will be identified and forthcoming, will be primaried, with my Complete and Total Endorsement, in the upcoming election.”

Loyalty to Trump has meant a lot of different things since he rose to political power in 2016. Now that he’s lost it, it means actively rejecting the system that resulted in his downfall. As he gears up for a prospective run at reclaiming his power in 2024, Trump is doing all he can to rid the Republican Party not only of anyone who might get in the way of him winning back the White House, but of those who dare acknowledge that he even lost it in the first place, and who dare remain uncommitted to doing whatever it takes to help him return to power. Michigan and its 16 electoral votes is one of his biggest targets.

One Michigan Republican who has already received Trump’s “Complete and Total Endorsement” is Matthew DePerno, who is running to unseat Democrat Dana Nessel as the state’s attorney general. DePerno was one of the speakers at the rally on Tuesday, which was held in service of gathering the over 340,000 petition signatures needed to put an audit initiative before the state legislature. DePerno has said that if elected in 2022, he would move to prosecute Nessel, whom he has called a “lawless attorney general,” and Democratic Governor Gretchen Whitmer, who has received countless death threats and was even the target of a terrorist kidnapping scheme. As he spoke about defending “America First values” on Tuesday, the hundreds in attendance began changing “Lock her up!,” presumably referring to Nessel.

DePerno has claimed since November that the 2020 election was illegitimate, and even filed the initial lawsuit claiming Dominion Voting Systems rigged voting machines in Biden’s favor, an unfounded conspiracy theory that Trump lawyers Sidney Powell and Rudy Giuliani pumped into the mainstream. DePerno proceeded to raise hundreds of thousands of dollars as he worked to uncover nonexistent election impropriety. In May, a Michigan judge threw out his lawsuit. In June, the state’s Republican-controlled Senate asked Nessel to investigate DePerno for profiteering off false election claims. In July, DePerno announced his campaign for Nessel’s seat, all the while continuing to raise money to support his sham crusade to overturn the election results.

“I am running for attorney general to restore integrity, justice, and morality in Michigan,” DePerno said to cheers on Tuesday.

DePerno was joined on Tuesday by several other audit-hungry Republicans, including current state Rep. Daire Rendon, who showed up sporting a “Q” button; Kristina Karamo, Trump’s pick for secretary of State who has long claimed the election was stolen; Jon Rocha a candidate for the U.S. House of Representatives; and other former, current, and prospective elected officials. “This isn’t about overturning the election,” Rocha said. “This is about making sure we’re secure.”

It’s very clearly not about that, though. Michigan has already conducted several audits of the 2020 election results (over 250, in fact, according to Secretary of State Jocelyn Benson), and the state’s Republican-led Senate Oversight Committee conducted a months-long investigation that turned up absolutely no evidence of anything resembling significant fraud. “I have faith that the people of Michigan will see through this charade and that voters on both sides of the aisle will continue to believe in their voices, their votes and their authority to hold their elected officials accountable,” Benson said of the rally on Tuesday.

The aim of these conservative con artists and conspiracy theorists is pretty clearly to sow doubt in the integrity of the state’s election systems so it will seem like there is a basis for outrage when they cry fraud if they lose in 2022 and 2024. Voter suppression measures like the ones implemented by the state’s establishment are helpful, but making it more difficult to vote is too passive. Trump wants Michigan to be governed by Republicans willing to go on the offensive, who will demand a forensic audit for an election that has already been exhaustively investigated, and who will replace county election officials with undemocratic loyalists to guard against another such loss ever taking place — which is what’s been happening recently across the state, a recent investigation by The Detroit News revealed.

Republicans in 8 of 11 of Michigan’s largest counties have in recent weeks nominated new election officials, some of which have supported the idea that the 2020 election was stolen. In Gennesse County, for example, Michelle Voorheis had served on the board of canvassers for 13 years, and used to chair the county’s Republican Party. She wasn’t nominated to serve another four-year term, however, a snub she told The Detroit News she believes is a result of statements she made on social media defending the outcome of the 2020 election. In Wayne County, the largest in Michigan, Monica Palmer believes she wasn’t renominated because she voted to certify the election results. One of the party’s nominees to replace her, Hima Kolanagireddy, appeared alongside Rudy Giuliani to allege election fraud during a Michigan House hearing after the election. In Macomb County, the third-largest in the state, Republicans nominated a woman who tweeted that Trump should convene “military tribunals” to investigate election fraud claims.

Trump is now pushing for the state’s legislature to be cleansed of Republicans who don’t feel similarly, and for voters to give prominent election conspiracy theorists like Karamo, his pick for secretary of State, and DePerno, the “super lawyer” he endorsed for attorney general, the power to actually do something about it should Trump happen to lose Michigan three years from now.

“If people like Matthew DePerno end up winning in the swing states for attorney general and secretary of State, I think democracy as we know it will be completely gone by 2024,” Nessel told MSNBC on Wednesday. “Irrespective of who gets the most votes, the candidate of their choice, which is clearly Donald Trump, will become president, and we will be reduced to, I guess, an an oligarchy, much like Russia or other states of that nature, and will no longer be a democratic republic.”