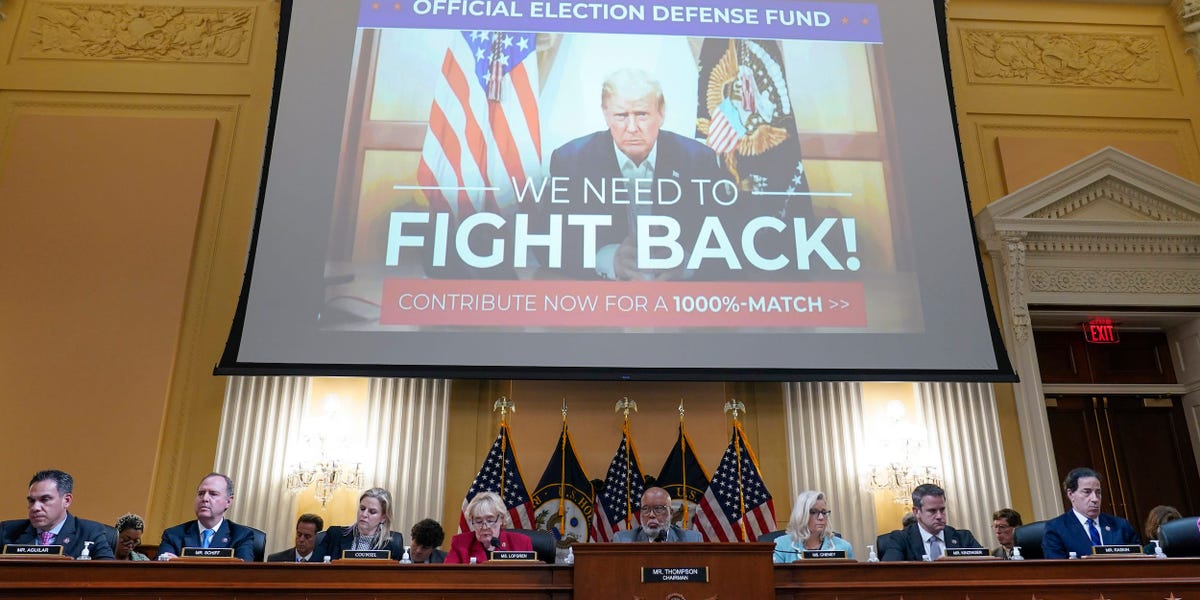 As the House’s January 6 committee lays out in devastating detail Donald Trump’s effort to overturn his defeat in the 2020 election, the former president is turning his anger on House Minority Leader Kevin McCarthy.

Trump has complained about McCarthy’s decision to boycott the panel, with the former president telling the Punchbowl newsletter on Wednesday: “Republicans don’t have a voice. They don’t even have anything to say.”

He is also said to be avidly and angrily watching every commission hearing and feeling that the GOP is doing little to defend him.

But Trump has no one but himself to blame for the situation, one of his Republican critics pointed out, as he was the one who opposed the formation of a bipartisan commission equally split between Republicans and Democrats to investigate the riot.

Back in early 2021, the House passed a bill to form a January 6 panel modeled on the 9/11 commission, with the Democratic caucus and 35 Republicans voting in favor. But it was blocked by a Republican filibuster in the Senate after Trump, congressional GOP leaders, and the far-right congressional Freedom Caucus opposed it.

Criticizing the 35 Republican representatives who ignored his call to vote against forming a commission, Trump said at the time that “sometimes there are consequences to being ineffective and weak.”

But Republican leaders could have used the commission as an effective platform to defend Trump, or at least try and mitigate the damage.

Under commission rules, they would have been free to choose five Republicans to sit on the commission and select a Republican co-chair. Trump allies selected for the panel could’ve sought to undermine arguments by Democrats and Trump’s critics, and subject witnesses to cross-examinations.

After the defeat of the commission bill, House Speaker Nancy Pelosi instead formed the House commission to investigate the attack, a move allowing her to veto Republican appointments and giving her considerable power to shape the committee.

The Democratic-controlled committee, in its carefully choreographed hearings crafted by TV producers for a prime-time audience, has presented a damaging case for Trump’s guilt unopposed. It has featured shocking testimony by Capitol Police officers injured in the riot and election officials threatened and intimidated by Trump allies.

Last July, McCarthy said he would not be selecting any Republicans to take part in the investigation after Pelosi barred two of his choices, Rep. Jim Jordan and Rep. Jim Banks, over their support for Trump’s bid to overturn his 2020 defeat.

However, committee rules left McCarthy with no option but to comply with Pelosi, and select Republicans approved by her to sit on the panel or pull out of the committee altogether. He chose the latter, and the two Republicans on the current January 6 commission, Reps. Liz Cheney and Adam Kinzinger, are vocal opponents of Trump who have been ostracized by much of the GOP.

The timing of the hearings is also damaging to Trump.

If he’d backed a bipartisan commission, it would’ve had to present its findings by the end of 2021. Instead, the House committee has timed the rollout of its hearings to damage Trump ahead of the 2022 midterms and remind voters of Republican culpability for the riot.