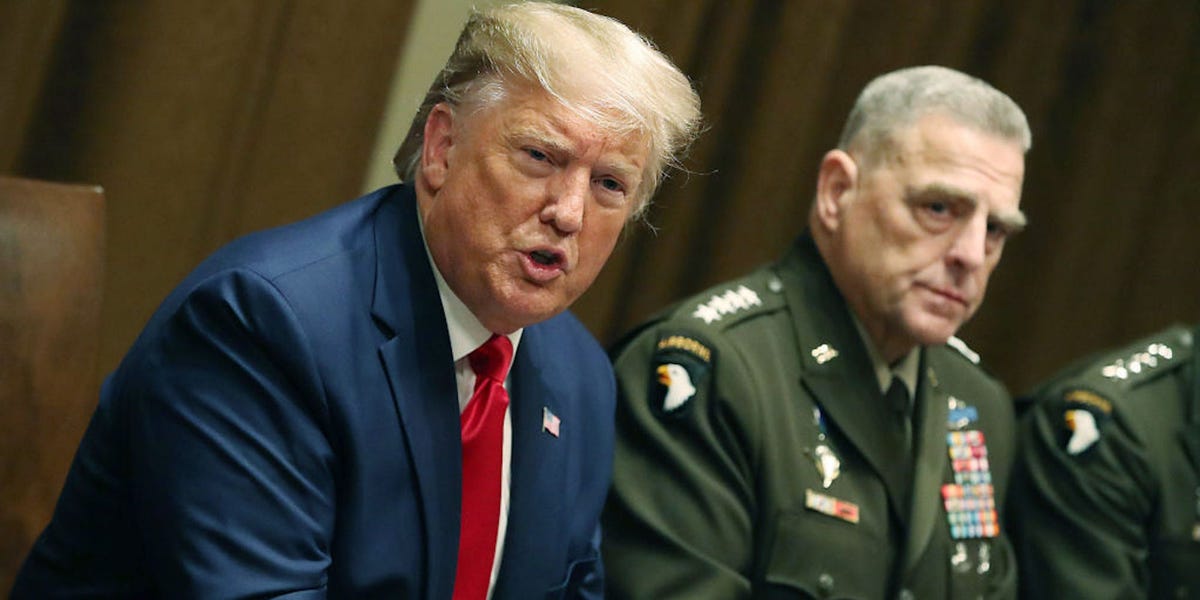 Former President Donald Trump said Tuesday that Gen. Mark Milley, the chairman of the Joint Chiefs of Staff, committed “treason” if, as a new book reported, he secretly contacted China to head off a conflict while Trump was in office.

Speaking on the conservative network Newsmax on Tuesday, Trump was asked about extracts from a new book, “Peril,” by the veteran reporters Bob Woodward and Robert Costa.

The authors say Milley was so concerned about Trump’s behavior after losing the 2020 election that he secretly contacted a top Chinese general with the goal of avoiding unnecessary conflict.

It was the second call the book said Milley made to Gen. Li Zuocheng; it said the first came just before the November election, with Milley seeking to assure his counterpart that the US was stable and not planning any attacks, as China apparently suspected.

“If it is actually true, which is hard to believe that he would have called China and done these things and was willing to advise them of an attack or in advance of an attack, that’s treason,” Trump said Tuesday.

As excerpts from the book emerged Tuesday describing actions attributed to Milley, The Daily Beast reported that the former president was telling allies to go on TV and demand that Milley be “arrested” for “treason.”

In the Newsmax interview, Trump claimed the opposite and said other people had been incessantly calling him to accuse Milley of treason.

Trump allies, including the Fox News host Tucker Carlson, were later making the accusation on TV and social media.

The extracts from the book are the latest indication that the top US military official took extraordinary actions as Trump sought to overturn his 2020 election defeat and stirred baseless claims of election fraud that inspired supporters to attack the Capitol on January 6.

The authors wrote that Milley believed after the Capitol attack that Trump had gone into “serious mental decline.”

They said among his actions was also to convene top Pentagon officials to try to avert the possibility of Trump launching a nuclear strike.

US presidents have the authority to launch nuclear attacks at will, but in practice experts have argued there are ways to oppose an order the military viewed as dangerous or wrong.

Debate has been raging among experts about the legality of the actions now being attributed to Milley.

Stephen Schwartz, a nuclear analyst, argued that such actions could be seen as “extralegal” because the chairman of the Joint Chiefs serves in an advisory capacity and does not have authority to override a presidential order.

Bradley P. Moss, a national security attorney, said Milley, based on one of the quotes attributed to him, was not seeking to override presidential orders but merely asserting his role in the decision-making process.

According to extracts published by CNN, Woodward and Costa acknowledged that some might believe Milley overstepped his authority.

They argued that he viewed the actions as a good-faith attempt to ensure there “was no historic rupture in the international order, no accidental war with China or others, and no use of nuclear weapons.”