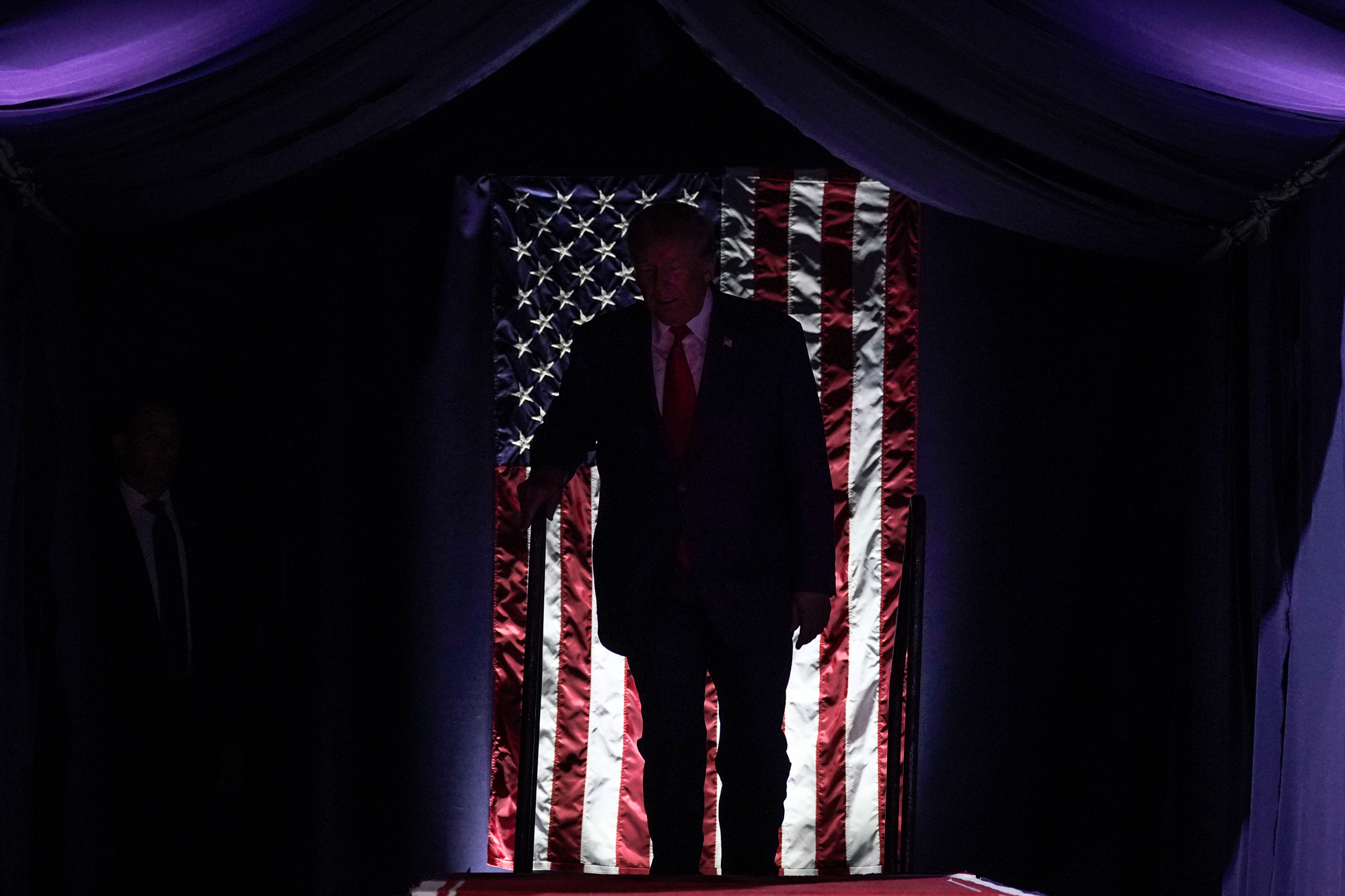 “I don’t see this working in terms of impacting the perceptions of the president,” said Dave Carney, a national Republican strategist based in New Hampshire. “He is under attack by the left, they’re using all the tools of government, they’re politicizing the legal system – this is just the cherry on top.”

Ever since his 2016 presidential campaign, and continuing through his post-presidency, Trump has maintained his status in the GOP not in spite of scandals piling up around him, but in part because of his ability to capitalize on them, his brand of grievance politics animating the Republican base. The New York lawsuit was the product of a state attorney general’s investigation. But it was also coming from a Democrat, in a state epitomizing for Republicans the coastal elite.

“The more Trump is attacked, the higher he climbs among Republicans,” said Frank Luntz, the veteran Republican consultant and pollster. “He knows how to play the victim card perfectly.”

If the New York attorney general “is trying to ensure his renomination, which I wouldn’t rule out, this is a good way to do it,” another prominent Republican strategist said.

In the New York civil suit, Trump is facing accusations that he and his family engaged in long-time deception, including about his net worth, as part of a fraudulent effort to minimize tax bills and otherwise benefit financially.

The case is not without reputational liabilities for Trump. Even before the lawsuit was announced, there had been concerns inside Trump world that the former president’s ongoing focus on the 2020 election — and Trump’s effort to overturn it — may damage him by casting him as a figure of the past. That has turned up in polls showing Republicans’ openness to alternative candidates like Florida Gov. Ron DeSantis in 2024, and in Trump’s approval rating ticking down.

The New York lawsuit, said Mike Madrid, a Republican strategist who was a co-founder of the anti-Trump Lincoln Project, likely “just further consolidates his base.” But he said, “a lot of this stuff is going to keep coming, and this drip-drip-drip just chips away. Even a drop of water over a few years can erode a cliff of granite.”

But in the short term, the lawsuit may do more damage to Trump’s potential Republican rivals in 2024 than to the former president.

“All of these things are continued gifts to President Trump,” said John Thomas, a Republican political strategist who had been organizing a PAC to support DeSantis in 2024, but who put those plans on hold after the FBI raid and subsequent rallying of Republicans around Trump.

One Republican strategist who works with hard-line congressional candidates around the country said “the more the Democrats keep going after him, the better it is.” For people who “held their noses and voted for Trump,” the strategist said, “the more you tell that guy he’s a piece of shit, deplorable, everything that’s wrong with America, the more you’re pushing that guy into the MAGA camp. Politics is tribal.”

If he were advising DeSantis, he said, he would suggest coming to Trump’s defense on the New York case while working more generally to portray Trump as an elder, not current, statesman in the party: “If you’re Ron DeSantis, you want the MAGA people to see Trump as Ron Paul and you as [the younger] Rand Paul. He was a great guy in his time, but he’s not our leader anymore.”

Another Republican strategist who works on national races said potential rivals will gain little by belaboring Trump’s legal troubles. After all, there’s already been a “rally around the flag effect” in favor of Trump in the aftermath of the Mar-a-Lago search last month.

“I don’t think you go after him on the scandals. Everyone is aware of those. All you do is make enemies out of the hard core members of the base,” the strategist said. “The only way to run against him is to say he’s a loser. You have to basically say, I love everything you did. I loved the policy. I think you’re great to shake up the country. But you lost the Congress, Senate, the White House – and you did that in four years – that’s a record.”

It’s what becomes of that record in November — more than than the lawsuit in New York — that is likely to offer the true test of Trump’s durability ahead of 2024. Following a primary campaign in which Trump intervened across the electoral map, several U.S. Senate candidates he helped win primaries are at risk of losing their general election campaigns.

“I think we’re going to have to see how this election comes out,” said Dick Wadhams, a former Colorado Republican Party chair and longtime party strategist. “Because if we lose a lot of Senate races, or House races for that matter, that we should have won, and that can be traced back to the emergence of Trump once again as such a dominant figure in this midterm election campaign, I think that will probably hurt him long term.”

Thomas said he concluded earlier this year that “Trump’s going to be the nominee if he wants it, unless we get blown out in the midterms and a lot of Trump’s candidates lose.”

In other words, the litigation in New York has nothing to do with that calculation.

“I think some people are like, this is the straw that’s going to break the camel’s back,” Thomas said. “I don’t see that at all.”

For Republicans following Trump, the picture on Wednesday was of simply another partisan clash. At the same time the New York state attorney general, Letitia James outlined her allegations of fraud against Trump and his family, his allies lashed out at the attorney general and circulated videos painting her work as a “witch hunt” against the former president and that she has tried to politically capitalize on since her campaign.

They also questioned whether James’ announcement, less than 50 days away from the midterm elections, was timed in order to boost her own political ambitions. James, a Democrat, has long been a political boogeyman for Trump, who regularly plays a video of her campaign promises to take him on at rallies.

“She is a fraud who campaigned on a ‘get Trump’ platform, despite the fact that the city is one of the crime and murder disasters of the world under her watch,” Trump posted to Truth Social on Wednesday.

But while Trump and his allies have tried to brush off the suit as just another form of political targeting, there is a recognition that her lawsuit could drag on in the courts — and be at the very least embarrassing for Trump.

The former president built his brand around a picture of wealth and success, and grossly overvaluing his worth creates an “emperor has no clothes” situation for the businessman turned politician.

In particular, for a former president who has long boasted about his wealth, James said on Wednesday that Trump “falsely inflated his net worth by billions of dollars to unjustly enrich himself and to cheat the system, thereby cheating all of us.”