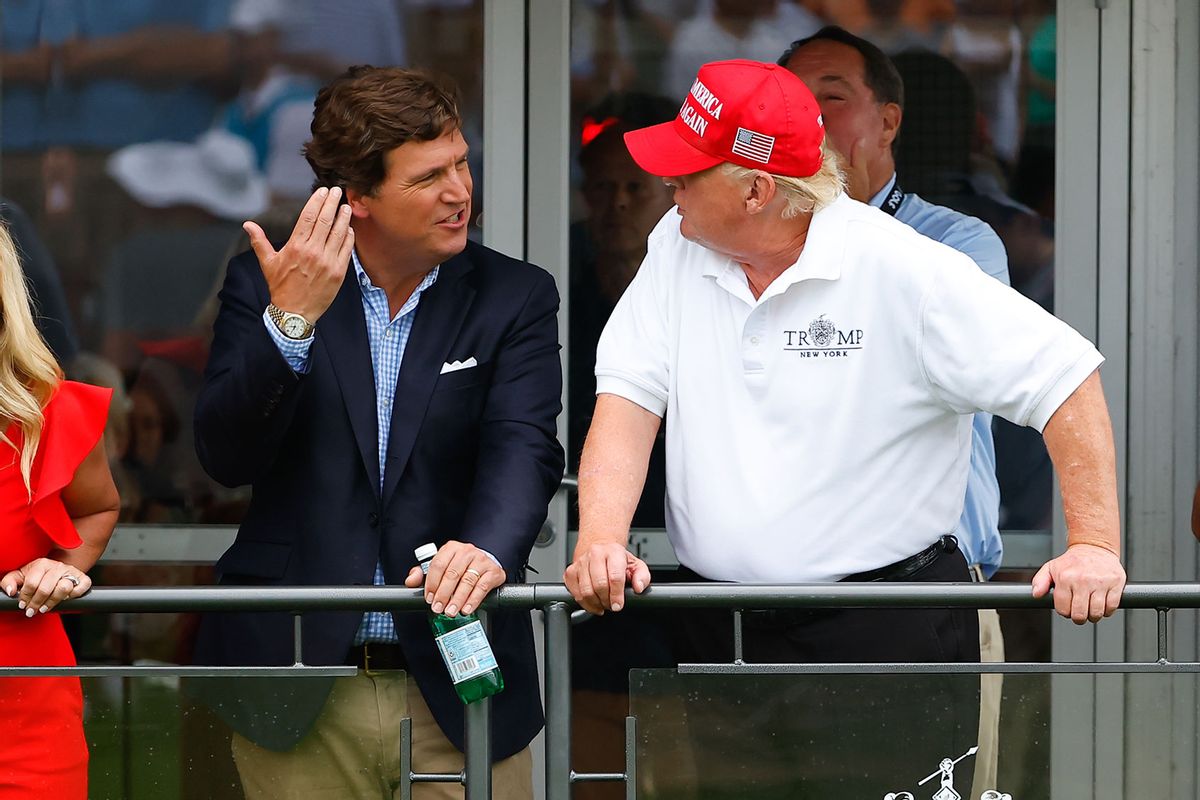 It’s telling how normalized events like this have become; they barely make ripples now in the national news. On Monday, Tucker Carlson of Fox News used his massive cable news audience — an average of over 3 million viewers a night — to spread a QAnon-style conspiracy theory and encourage people to commit violence against teachers and health care providers. Media Matters collected the clip. It’s hard to follow for those who aren’t already well-versed in the right’s mythology accusing LGBTQ people and their allies of “grooming” children to be victims of sexual abuse. But what is undeniable is that Carlson is calling for violent vigilantism in response to his false accusations against doctors and teachers.

Carlson is light on examples of this alleged grooming but heavy on hyperbole and accusations implying that every child who sees a doctor or enters a classroom is in danger of being sexually abused by some liberal cabal. Yes, schools have sex education and children’s hospitals offer affirming care for LGBTQ kids. But the fantasy that Carlson spins out has nothing to do with these banal realities. He claims hospitals are “castrating” children, a claim that has no relationship to painstakingly slow care protocols for gender non-conforming minors, care which is mostly focused on mental health approaches and sometimes hormonal treatment. (Surgery is generally reserved for adults.) We see this in Carlson’s accusation that sex education is offered to puberty-age children in order to sexually stimulate teachers. In reality, such education is important for preventing sexual abuse.

But what’s especially disconcerting is how Carlson has grown so cavalier about using these conspiracy theories to push violence as a tool against educators and health care workers. During this clip, he calls for “neighborhood dads” to dish out “instant justice” to sex education teachers. He claims doctors and teachers are “weirdos getting creepy with other people’s children” and that they are committing “sex crimes.” He implies doctors are somehow facilitating gender transition for kids without consulting parents. And he flat-out calls it a “moral duty” to “hurt” people who are supposedly doing these things.

Carlson doesn’t say the word “QAnon,” because he’s clever enough to build plausible deniability around his rhetoric. But he appears to be pandering to and legitimizing this conspiracy theory, which holds that Democrats are leading an international cabal of cannibalistic pedophiles. He even baselessly insinuates that President Joe Biden molested his own daughter, and suggests this is why Biden supports trans rights. That rhetoric doesn’t just encourage people to go online to “research” on their own, sending them directly to QAnon. It trains audiences to be more accepting of illogical conspiracy theories by legitimatizing wild leaps of logic.

Also, crucially, Carlson is valorizing violence. Ultimately, this is what QAnon and all adjacent “groomer” conspiracy theories are about: Building the cultural architecture to justify political violence. It recasts violence against Democrats and LGBTQ people as “defending children.” And, by running segments like this, Carlson removes the wiggle room to pretend that these outrageous conspiracy theories aren’t inherently violent.

The link between political violence and the QAnon “groomer” talk is also evident in Donald Trump’s escalatingly open dalliance with QAnon. Last week, Trump posted a bit of QAnon fan art showing him in what is supposed to be a majestic pose, sporting a QAnon pin and captioned with QAnon slogans.  A few days later, at a rally in Ohio that was supposed to support Republican senatorial candidate J.D. Vance, the Trump team played a tune that was almost identical to a QAnon song as the crowd raised their fingers in the QAnon salute.

The timing of this more overt QAnon support happens to coincide with Trump’s increasingly open winking at violence. In response to the FBI raid at Mar-a-Lago in August, which targeted classified materials Trump is illegal possession of, Trump has made unsubtle threats of violence against law enforcement. He sent a message to the Department of Justice reminding them that his supporters are generating a lot of “heat” but that he could call them off, implying that the price would be the DOJ dropping the investigation. Trump has continued to issue these implied threats through right wing media, assisted by Sen. Lindsey Graham, R-S.C., who offered his own threat disguised as a warning of “riots in the streets” if Trump is indicted.

Trump and Carlson are speaking to two audiences — their own devoted supporters and worried liberals.

As David Graham at the Atlantic argued, “If there was a time when Trump didn’t know how people would respond when he makes these veiled threats, it has passed. He understands now, and does it anyway.” Plausible denials that this rhetoric is anything but purposeful should have dissipated after January 6. Recently, a Trump supporter died in Cincinnati after attacking an FBI office in direct response to Trump’s threatening noises about the raid.

All this led to Biden giving his speech at Independence Hall in Philadelphia, reminding Americans that “history tells us that blind loyalty to a single leader and a willingness to engage in political violence is fatal to democracy.” Biden’s speech was well received, with 58% of Americans agreeing with him that Trump leads a violent movement that threatens democracy.

Trump’s reaction has clearly not been to scale back but to double down. Carlson’s segment is also emphatic in its endorsement of violence. The overtly violent rhetoric and unsubtle nods to QAnon all point to a strategy of scaring political opponents into backing down, and it’s spreading. Across the country, far-right sheriffs are promising campaigns of intimidation at the polls. Reports show that Republican candidates across the country are flirting with pushing their own Big Lies if they lose their elections, seeding the possibility that they could attempt to rile up their own voters to “do something,” much like Trump incited the January 6 insurrection.

Trump and Carlson are speaking to two audiences — their own devoted supporters and worried liberals who see clips of these messages encouraging violence. But radicalism can also breed backlash. As the largely positive response to Biden’s speech shows, Americans may not be keen on either extremism or political violence. Conspiracy theories like QAnon turn off exponentially more people than they lure in. Far-right bets on the politics of violence and intimidation have not yet proven to be successful in intimidating their opponents. This strategy may even anger more voters, making them more likely to turn out for Democrats in November.