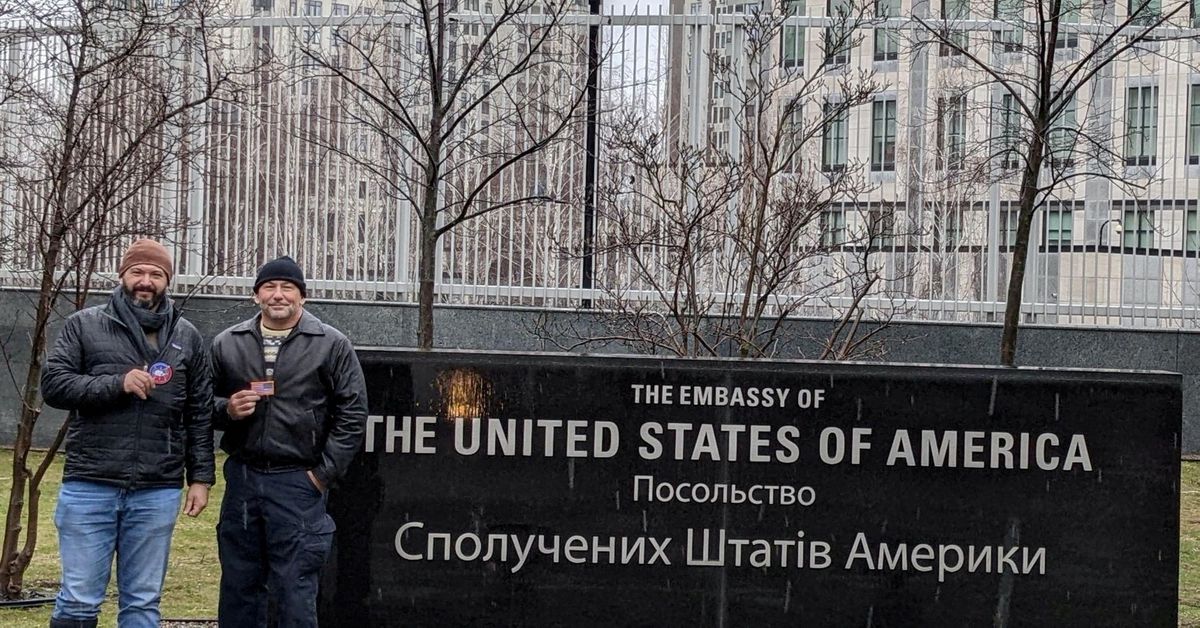 Bryan Stern (left), co-founder and head of on-the-ground operations of Project Dynamo, poses with an unidentified man outside the U.S. Embassy in Kyiv, Ukraine, in this undated handout picture obtained by Reuters February 24, 2022. Project Dynamo/Handout via REUTERS

WARSAW, May 12 (Reuters) – A U.S. citizen who says he was held captive and beaten by Russian forces in Ukraine before being rescued by a private volunteer group spoke of his relief at reaching safety in Poland, describing his ordeal as an example of war crimes.

Kirillo Alexandrov, 27, crossed the Polish border in the early hours of Wednesday and had an emotional reunion with his mother, who had contacted Florida-based nonprofit organisation Project Dynamo in the hope they could rescue her son.

“Once we crossed the Polish border… a thousand-pound boulder just fell off my back,” Alexandrov told Reuters in an interview, describing the moment he saw his tearful mother as “bittersweet”.

Alexandrov, along with his Ukrainian wife and her mother, are among over 600 people freed in dozens of such missions since February, according to Project Dynamo, which was first formed to rescue Americans and others from Afghanistan last year.

Alexandrov, a native of Michigan who had moved to Ukraine, was arrested with his spouse and mother-in-law in late March outside the southern Ukrainian city of Kherson as they were trying to flee the region following its occupation by Russian troops, Project Dynamo said. read more

Russian President Vladimir Putin sent his troops into Ukraine on what he calls a “special military operation” to demilitarise and “denazify” Ukraine. Ukraine and the West say Putin launched an unprovoked war of aggression.

According to Project Dynamo co-founder Bryan Stern, Alexandrov faced 11 charges related to spying for the U.S. government, which he says were fabricated. Stern said that Alexandrov had travelled to Ukraine to be with his wife and had worked in online sales.

“I was initially arrested at my home,” Alexandrov said.

“They came in, took me out, cuffed me, you know beat me, threw me on the ground, took me to a cell, interrogated me and furthermore beat me. Then performed a mock execution, beat me some more, threw me in a cell and took my documents.”

“The things my family went through were nothing short of war crimes,” he said later in the interview.

The Russian defence and foreign ministries did not respond to emailed requests for comment. Russia has previously denied targeting civilians and has rejected allegations of war crimes.

Project Dynamo, established by a group of U.S. military veterans, made headlines in September 2021 when it arranged for the chartered evacuation of more than 100 Americans flown from Afghanistan to the United States via the United Arab Emirates.

Stern said the group had been carrying out negotiations to secure Alexandrov’s release, while at the same time developing “hard options” to get him out by land, sea or air.

Stern said in a statement on Tuesday that a ground option had been chosen. He declined to go into details about exactly how the rescue had taken place, citing security reasons.

Project Dynamo says it is is working to help others in situations like the one it says Alexandrov found himself in.

“There’s plenty of work to be done, we’re tracking a number of other American cases that are trapped behind enemy lines,” he said.