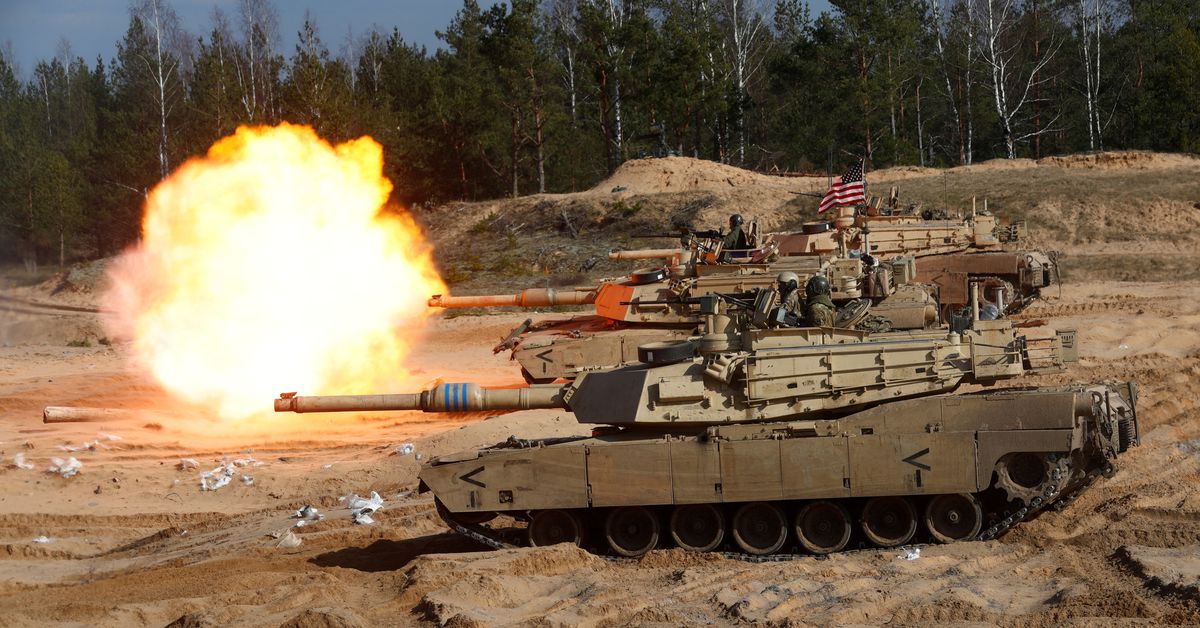 KYIV/BERLIN, Jan 19 (Reuters) – Ukraine pleaded on Thursday for the West to finally send it heavy tanks as the defence chiefs of the United States and Germany headed for a showdown over weapons that Kyiv says could decide the fate of the war.

The next day both will convene dozens of allies to pledge weapons for Ukraine at the United States’ Ramstein Air Base, a meeting billed as a chance to provide the arms to shift the war’s momentum in 2023.

Billions of dollars worth of military aid is expected, and countries including Canada, the Netherlands and Sweden have already announced new packages of armoured vehicles and air defences. But the meeting’s success could depend on whether it brings heavy tanks, which Kyiv says it needs to fend off Russian assaults and recapture occupied land.

“We have no time, the world does not have this time,” Andriy Yermak, head of the Ukrainian presidential administration, wrote on the Telegram messaging app on Thursday.

“The question of tanks for Ukraine must be closed as soon as possible,” he said. “We are paying for the slowness with the lives of our Ukrainian people. It shouldn’t be like that.”

A big pledge of tanks requires resolving a stand-off between Washington and Berlin, which has so far blocked allies from sending its Leopard 2 tanks, workhorse of militaries across Europe.

Washington and many Western allies say the Leopards – which Germany made in the thousands during the Cold War and exported to its allies – are the only suitable option available in big enough numbers.

A German government source said Berlin would lift its objections if Washington sends its own Abrams tanks. U.S. officials say the Abrams, which runs on powerful turbine engines, uses too much fuel for Kyiv’s strained logistics system to keep many of them supplied at the front.

Poland and Finland have already said they would send Leopards if Germany lifts its veto, and other countries have indicated they are ready to do so as well. Britain added to the pressure by breaking the taboo on heavy tanks last week, offering a squadron from its fleet of Challengers, though far fewer of these are available than Leopards.

Germany has been reluctant to send offensive weapons that could be seen as escalating the conflict. Many of its Western allies say that concern is misplaced, with Russia showing no sign of backing away from its onslaught against Ukraine.

Colin Kahl, the Pentagon’s top policy adviser, said on Wednesday Abrams tanks were not likely to be included in Washington’s next massive $2 billion military aid package, which will be headlined by Stryker and Bradley armoured vehicles.

“I just don’t think we’re there yet,” Kahl said. “The Abrams tank is a very complicated piece of equipment. It’s expensive. It’s hard to train on. It has a jet engine.”

Germany has said the tank decision is the first item on the agenda of Pistorius, named to replace Christine Lambrecht who quit as defence minister this week. At a ceremony after being sworn in, Pistorius pledged to support Ukraine, including with military hardware, but gave no specifics.

“These are not normal times, we have a war raging in Europe. Russia is waging a brutal war of annihilation on a sovereign country, on Ukraine,” he said.

Opening his meeting Pistorius, Austin described Germany as one of Washington’s closest allies and thanked it for its suppport for Ukraine so far.

Ukraine, which has relied primarily on Soviet-era T-72 tank variants, says the new tanks would give its troops the mobile firepower to drive out Russian troops in decisive battles.

Western tanks have more effective armour and better guns than Soviet-era counterparts, which have been destroyed in their hundreds on both sides during the 11 months of war in Ukraine.

Fighting has been concentrated in the south and east of Ukraine, after Russia’s initial assault from the north aimed at taking Kyiv was thwarted during the first months Russia’s “special military operation”.

After big Ukrainian gains in the second half of 2022, the frontlines have largely been frozen in place over the past two months, with neither side making big gains despite heavy casualties in intense trench warfare.

Yevgeny Prigozhin, leader of the Russian mercenary force Wagner which has taken a leading role in fighting near the eastern city of Bakhmut, claimed on Thursday his forces had seized the village of Klishchiivka on Bakhmut’s outskirts. Kyiv has previously denied that the settlement has fallen. Reuters could not confirm the situation there.

Prigozhin, who recruits convicts from Russian prisons with promises of pardons for his privately-run force outside the regular military command, complained last week that his fighters were not being given enough credit by top brass.

Live: Ukraine House in Davos stages the event “The Path to Victory: A Conversation with Ukraine’s Top Diplomat” on the sidelines of the World Economic Forum.