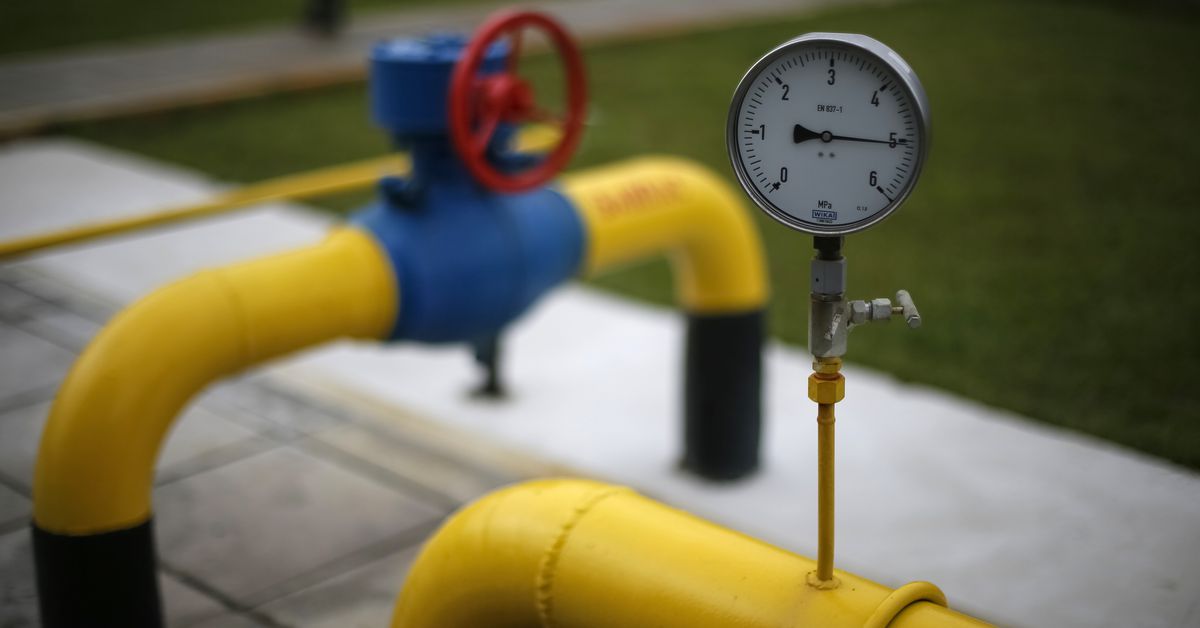 KHARKIV, Ukraine, May 11 (Reuters) – Flows of Russian gas to Europe through a transit point in Ukraine dried up on Wednesday, while Kyiv reported battlefield gains over invading Russian forces that could signal a shift in the war’s momentum.

Ukraine has remained a major route for Russian gas to Europe even since the Feb. 24 invasion, which President Vladimir Putin calls a “special military operation”.

Mounting Western sanctions are seeking to ban or phase out the use of Russian energy, a key source of funds for Putin’s war effort and a vulnerability for Europe, especially Germany.

Blaming the presence of occupying forces for the suspension, Ukraine’s gas pipeline operator said on Tuesday it would redirect gas from the Sokhranivka transit point, which is in an area occupied by Russian forces, to another in a Ukraine-controlled area. read more

Requests for Russian gas transit for May 11 via Sokhranivka fell to zero, data from the operator showed early on Wednesday. read more

Since Russia was forced to abandon an assault on the capital Kyiv at the end of March, its main force has been trying to encircle Ukrainian troops in the eastern Donbas region, using Izyum near Ukraine’s second city Kharkiv, in the northeast, as a base.

But Ukrainian troops have mostly held out against assaults, and in recent days recaptured four settlements north of Kharkiv, Tetiana Apatchenko, a press officer with the main Ukrainian force in the area, said on Tuesday.

Russian forces were trying to prevent Ukrainian troops from moving further towards the border in the Kharkiv region and trying to fully capture the town of Rubizhne, Ukraine’s general staff said early on Wednesday.

Across the border, the governor of Russia’s Belgorod region said on his Telegram channel that a “yellow”, second-highest, security alert would be maintained there until May 25. The area has come under sporadic attack from Ukrainian forces.

A Ukrainian counterattack near Kharkiv could signal a new phase of the conflict, making with supply lines into Russia potentially vulnerable.

President Volodymyr Zelenskiy said Ukrainian successes were gradually pushing Russian forces out of Kharkiv, which has been under bombardment since the war began.

“But I also want to urge all our people … not to spread excessive emotions. We should not create an atmosphere of excessive moral pressure, where victories are expected weekly and even daily,” he said in a video address.

Putin, meanwhile, appeared to be preparing for a long conflict, and a Russian victory in Donbas might not end the war, U.S. Director of National Intelligence Avril Haines said on Tuesday. read more

In the retaken villages of Staryi Saltiv and Vilkhivka near Kharkiv, Ukrainian servicemen gathered the bodies of Russian soldiers killed in the fighting, according to Reuters witnesses.

Ukrainian border guards said on their Telegram channel that Russian forces were shelling the Sumy and Chernihiv regions close to the border.

In the country’s south, Ukrainian armed forces said they struck nine enemy targets, with enemy losses of 79 servicemen. Russian fire was concentrated on the Mykolaiv region bordering the Black Sea where homes, farms and power lines were damaged.

Russian forces also continued to bombard the Azovstal steelworks in the southern port of Mariupol with, Ukraine’s general staff said, trying to capture the last bastion of Ukrainian resistance in the ruined city.

Reuters was unable to independently verify the reports of fighting.

Ukraine says tens of thousands of people have been killed there during two months of Russian siege.

Russia was trying to reinforce exposed troops on Zmiinyi Island, also known as Snake Island, which became famous for the foul-mouthed defiance of Ukrainian border guards early in the invasion.

If Russia consolidated its position there it could dominate the northwestern Black Sea, Britain’s Ministry of Defence said in a regular bulletin.

Russia’s resupply vessels have minimum protection in the western Black Sea, following the Russian navy’s retreat to Crimea after the loss of the flagship Moskva, it said.