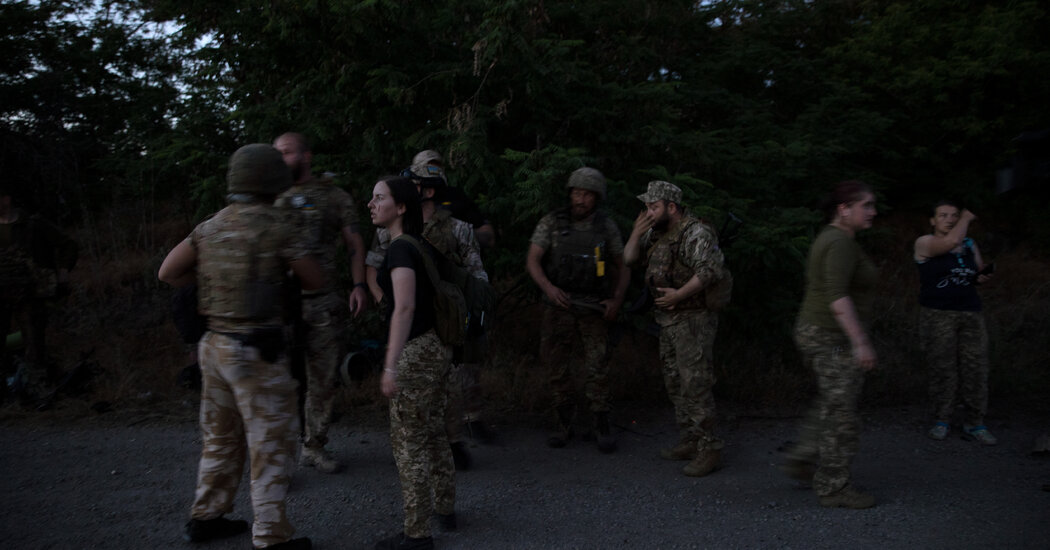 Russian authorities on Monday threatened Lithuania, a member of NATO, with retaliation if the Baltic country does not swiftly reverse its ban on the transportation of some goods to Russia’s exclave of Kaliningrad by rail.

Citing instructions from the European Union, Lithuania’s railway on Friday said it was halting the movement of goods from Russia that have been sanctioned by the European bloc.

Dmitri S. Peskov, the Kremlin’s spokesman, told reporters the situation was “more than serious.” He called the new restrictions “an element of a blockade” of the region and a “violation of everything.”

Accustomed to Russian threats, officials in Vilnius, the Lithuanian capital, took Moscow’s warnings as mostly bluster — the latest in a series of increasingly intemperate statements by a country that is severely stretched militarily by its invasion of Ukraine.

“We are not particularly worried about Russian threats,” said Laurynas Kasciunas, chairman of the Lithuanian Parliament’s national security and defense committee. “The Kremlin has very few options for how to retaliate.”

A military response by Russia, he added, “is highly unlikely because Lithuania is a member of NATO. If this were not the case, they probably would consider it.”

Russia’s fury at Lithuania followed a warning earlier on Monday by Ukraine’s president, Volodymyr Zelensky, that Moscow would initiate “greater hostile activity” against Ukraine and European countries in the coming days in response to his nation’s efforts to join the European Union.

Up to 50 percent of all rail cargo shipped between mainland Russia and Kaliningrad — which Russian officials said includes construction materials, concrete and metals among other items — will be affected by the ban announced last week. The restrictions exposed the acute vulnerability of the region, which is part of Russia but not connected to the rest of the country. It borders the Baltic Sea, but is sandwiched between two NATO members, Lithuania and Poland.

Kaliningrad, which the Soviet army seized from Germany in 1945, was once touted by Russia as a symbol of its growing ties with the Europe. But it has lately become a volatile East-West fault line.

In the 1990s, Russian authorities promoted Kaliningrad’s past ties to Germany as a tourist draw, celebrating its role in the life and work of the 18th century German philosopher Immanuel Kant, who was born and lived in Konigsburg, the regional capital now named Kaliningrad.

More recently, however, Moscow has sought to wipe out traces of Germany’s deep historical ties to the region — even though Germany makes no claim to Kaliningrad and has shown no interest in getting it back, a sharp contrast with Russia’s views of former Soviet territory, including Ukraine.

Gripped by increasingly aggressive nationalism, Russia has ditched policies that promoted Russia as part of Europe and moved advanced Iskander missiles into Kaliningrad. Lithuania’s defense minister said in April that Russia has stationed nuclear weapons in the region, which Moscow denies.

“If cargo transit between the Kaliningrad region and the rest of the Russian Federation via Lithuania is not fully restored in the near future, then Russia reserves the right to take actions to protect its national interests,” the ministry said in a statement.

Lithuanian Foreign Minister Gabrielius Landsbergis defended the restrictions on shipments to Kaliningrad, saying that his country was only fulfilling the terms of E.U. sanctions.

“It is not Lithuania doing anything, it is European sanctions that started working,” he told reporters in Luxembourg on Monday before a meeting of European foreign ministers.

Аnton Alikhanov, the governor of Kaliningrad, said his government was already working to find alternative routes for cargo shipments, in particular those containing metals and construction materials. He said one option could be moving cargo by sea, which would require up to seven ships to fill the demand before the end of the year.

He added that the local government was considering at least three retaliatory options to propose to the Kremlin, including a possible ban on the shipment of goods to Lithuanian ports via Russia.

Russia’s relations with Lithuania, formerly part of the Soviet Union, have never been close but unraveled dramatically in recent months as Lithuania took a leading role pushing for tough European Union sanctions against Russia over the invasion of Ukraine.

Just two weeks ago, a member of Russia’s parliament from Mr. Putin’s United Russia party submitted a draft law declaring Lithuania’s 1990 declaration of independence illegal. The bill aims to reverse the dissolution of the Soviet Union, something that Mr. Putin has lamented as “the greatest geopolitical tragedy of the 20th century.”

But, as the halting progress of Russian troops in Ukraine has shown, there is a yawning gap between Mr. Putin’s desire to roll back history and his country’s capabilities. Any military action against Lithuania would bring Russia’s already battered military into direct confrontation with NATO.