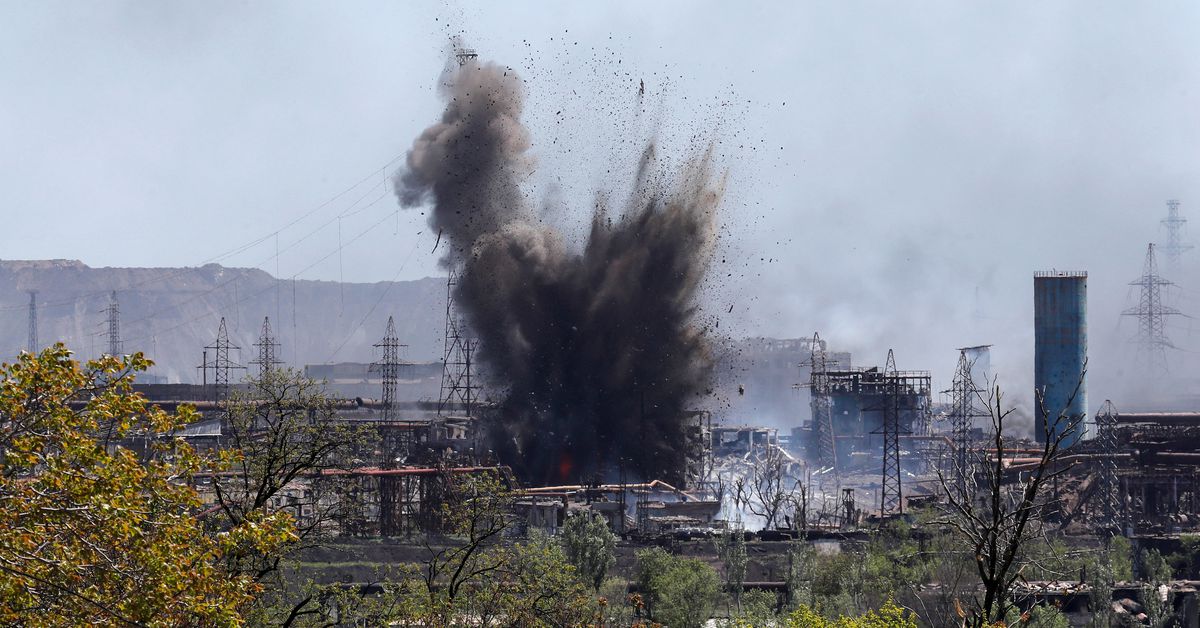 KYIV/VILKHIVKA, Ukraine, May 11 (Reuters) – Ukraine on Wednesday reported pushing back Moscow’s forces in a counterattack that could signal a shift in the momentum of the war and shut gas flows on a route through Russian-held territory, raising the spectre of an energy crisis in Europe.

Ukraine’s armed forces’ general staff said it had recaptured Pytomnyk, a village on the main highway north of the second largest city of Kharkiv, about halfway to the Russian border.

“The occupying forces moved to the defence in order to slow down the pace of the offensive of our troops,” it said. “The settlement of Pytomnyk … was liberated.”

Following days of advances north and east of Kharkiv, one Ukrainian military source said on condition of anonymity that Ukraine’s forces were within just several kilometres of the Russian frontier by Wednesday morning.

Beforehand, Russian forces had been on the outskirts of Kharkiv, a city 40 km (25 miles) from the frontier.

The advance appears to be the fastest that Ukraine has mounted since it drove Russian troops away from the capital Kyiv and out of northern Ukraine at the beginning of April.

If sustained, it could let Ukrainian forces threaten supply lines for Russia’s main attack force, and even put rear logistics targets in Russia itself within range of artillery.

In Vilkhivka, a shattered village east of Kharkiv, the thump of near constant artillery and swoosh of multiple rocket launchers could be heard from fighting at the front.

The Kremlin calls its actions in Ukraine a “special military operation” to demilitarise a neighbour threatening its security. It denies targeting civilians.

Ukraine says it poses no threat and that the deaths of thousands of civilians and destruction of towns and cities show that Russia is waging a war of conquest.

Wednesday’s move by Ukraine to cut off Russian gas supplies through territory held by Russian-backed separatists was the first time the conflict has directly disrupted shipments to Europe.

Gas flows from Russia’s export monopoly Gazprom to Europe via Ukraine fell by a quarter after Kyiv said it was forced to halt all flows from one route, through the Sokhranovka transit point in southern Russia.

Should the supply cut persist, it would be the most direct impact so far on European energy markets.

Moscow has also imposed sanctions on the owner of the Polish part of the Yamal pipeline that carries Russian gas to Europe, as well as Gazprom’s former German unit, whose subsidiaries service Europe’s gas consumption.

A view shows an explosion at a plant of Azovstal Iron and Steel Works during Ukraine-Russia conflict in the southern port city of Mariupol, Ukraine May 11, 2022. REUTERS/Alexander Ermochenko

The implications for Europe, which buys more than a third of its gas from Russia, were not immediately clear.

Berlin said it was looking into the announcement.

“The German government and Federal Network Agency, as trustees of Gazprom Germania, are already in the process of taking the necessary precautions and preparing for various scenarios,” an Economy Ministry spokesperson said.

As fighting continued, the governor of the Russian region of Belgorod, on the other side of the border from Kharkiv, said a village had been shelled from Ukraine, wounding one person.

Further east, Ukrainian forces seemed to be in control of Rubizhne, on the banks of the Donets river.

“It is burned out, just like all Russian tanks,” a Ukrainian soldier told Reuters near Rubizhne next to the ruins of one Russian tank. “The weapons are helping a lot, the anti-tank ones.”

Ukraine authorities have so far confirmed few details about the advance through the Kharkiv region.

“We are having successes in the Kharkiv direction, where we are steadily pushing back the enemy and liberating population centres,” said Brigadier General Oleksiy Hromov, Deputy Chief of the Main Operations Directorate of Ukraine’s General Staff.

In southern Ukraine, where Russia has seized a swathe of territory, Kyiv has said Moscow plans to hold a fake referendum on independence or annexation to make its occupation permanent.

The Kremlin said on Wednesday it was up to residents living in the Russian-occupied Kherson region to decide whether they wanted to join Russia, but any such decision must have a clear legal basis.

Earlier, TASS news agency quoted an official in the Russian-controlled administration as saying the region planned to ask President Vladimir Putin to incorporate it into Russia.

Russian forces have also continued to bombard the Azovstal steelworks in the southern port of Mariupol, last bastion of Ukrainian defenders in a city now almost completely controlled by Russia after more than two months of siege.

Ukraine’s Azov Regiment holed up inside it said Russia was bombing and trying to storm it. Ukraine was seeking to swap Russian prisoners of war with the wounded soldiers in Azovstal.

“If there is hell on earth, it is there,” wrote Petro Andryushchenko, an aide to Mariupol’s Mayor Vadym Boichenko, who has left the city.

Ukraine says it is likely that tens of thousands of people have been killed in Mariupol. Ukrainian authorities say between 150,000 and 170,000 of the city’s 400,000 residents are still living there amid the Russian-occupied ruins. read more

The mayor said that unless medical care was restored and water systems repaired, epidemics would break out. “Without proper conditions, mortality among vulnerable groups will increase exponentially.”