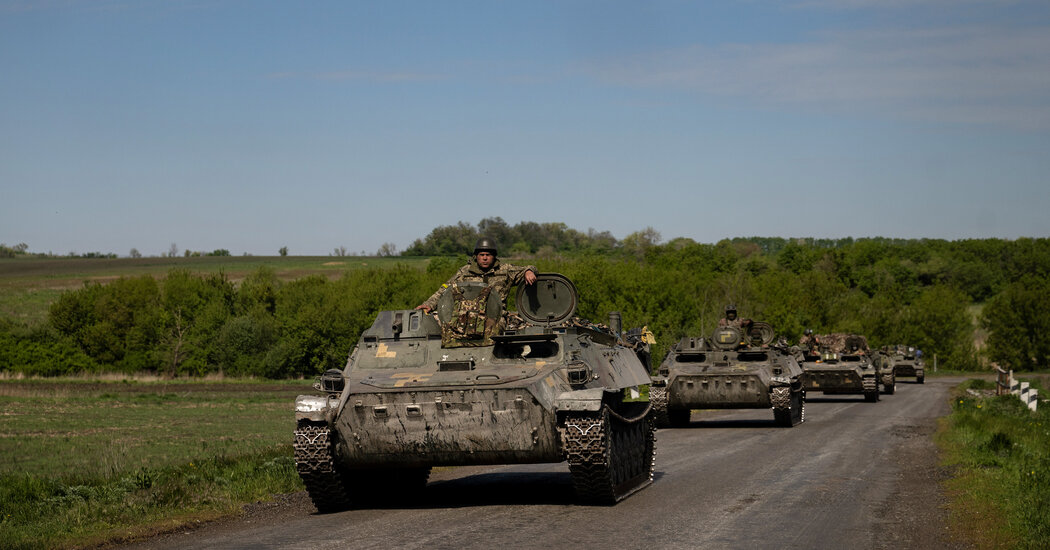 With Finland and Sweden racing toward NATO membership, the now very real prospect of the two Nordic countries joining the seven-decade-old Atlantic alliance is raising a pressing question in Kyiv and beyond: Why them and not Ukraine?

While the wealthy, previously nonaligned countries could potentially join NATO in less than a year, Ukraine’s prospects of joining the alliance any time soon — if ever — are very unlikely. For one thing: NATO, an alliance predicated on the doctrine of mutual defense, would be highly unlikely to admit a country ensnared in war.

Ukraine, battling a fierce Russian invasion, would benefit immensely from NATO’s defining credo, which says that “an armed attack” against any NATO ally is considered an attack against them all. But President Vladimir V. Putin has tried to justify his invasion by saying that Ukraine’s potential NATO membership threatens Russia, and Washington and its European allies do not want to further antagonize Russia and risk transforming the conflict into an expanded war.

Even without the high-stakes geopolitical risks, Ukraine, a former Soviet republic that has struggled with endemic corruption since gaining independence, would find it difficult to meet several necessary requirements to join NATO, including the need to demonstrate a commitment to the rule of law. Sweden and Finland, in contrast, have developed over decades into vibrant and healthy liberal democracies.

And any decision to admit a country to NATO requires unanimous consent from all of NATO’s 30 member states, which Ukraine is very unlikely to secure.

Here’s why Ukraine faces an uphill struggle to join one of the century’s most-vaunted security clubs:

Mired in war, Ukraine has set aside the goal of joining NATO.

Finland joined NATO’s Partnership for Peace program along with Sweden in 1994 and has become ever closer to the alliance without joining it. Finland’s leaders have declared their support for joining NATO, and those in Sweden are expected to do the same within a matter of days.

But for Ukraine, being mired in an all-out war with Russia makes its NATO aspirations far more complicated. In February, President Volodymyr Zelensky of Ukraine stressed the ambition to join NATO, an aspiration fixed in Ukraine’s constitution since 2019. But this March, as war with Russia raged, Mr. Zelensky backed down from that hope, signaling that his country needed to accept that it may never join NATO.

The comments appeared to be a nod to the Kremlin’s demand that Ukraine give up the aim of joining NATO as a precondition to stopping the war. That intention was reiterated during peace talks in late March in Istanbul between Ukraine and Russia, during which Ukrainian officials said their country was ready to declare itself permanently neutral — forsaking the prospect of joining NATO, a key Russian demand.

Even if Ukraine still wanted to join NATO, it may not meet the requirements.

To meet one of the three main criteria for entry into NATO, a European nation must demonstrate a commitment to democracy, individual liberty and support for the rule of law. While Ukrainian leaders say they have met that threshold, some American and European officials argue otherwise.

In a 2020 analysis, Transparency International, an anticorruption watchdog, ranked Ukraine 117th out of 180 countries on its corruption index, lower than any NATO nation at the time.

Some Western officials also question whether Ukraine could meet another criterion to contribute to the collective defense of NATO nations, even though Ukraine sent troops to the U.S.-led wars in Iraq and Afghanistan and has also shown its military prowess during the Russian invasion.

Whatever Ukraine’s military capabilities, there are other geopolitical hurdles. The alliance wants to avoid greater Russian hostility, and Ukraine would almost certainly have trouble meeting the third criterion: winning approval from all of NATO’s members. France and Germany have in the past opposed Ukraine’s inclusion, and other European members are skeptical — a likely dealbreaker if Ukraine wanted to join.

The United States has been lukewarm about Ukraine joining NATO.

President Vladimir V. Putin’s insistence that he needed to prevent Ukraine from joining NATO appeared to be a pretext for the war. But the United States has also been deeply wary of Ukraine joining the alliance.

In 2008, NATO promised Ukraine and Georgia that they could someday become members, without specifying a date. But the alliance has done little to make that promise a reality.

American officials say they will not appease Mr. Putin by undermining a policy enshrined in NATO’s original 1949 treaty, which grants any European nation the right to ask to join. The White House insists it will not allow Moscow to quash Kyiv’s ambition to join the alliance.

Nevertheless, in January, a month before Mr. Putin launched his full-scale invasion, difficult negotiations between the United States, Russia and European members of NATO made it clear that the Biden administration had no immediate plans to help bring the former Soviet republic into NATO.

President Biden, wary of expanding U.S. military commitments, has been reluctant to support Ukraine’s membership. Analysts say two decades of war in Iraq and Afghanistan have cooled his fervor for expanding NATO.