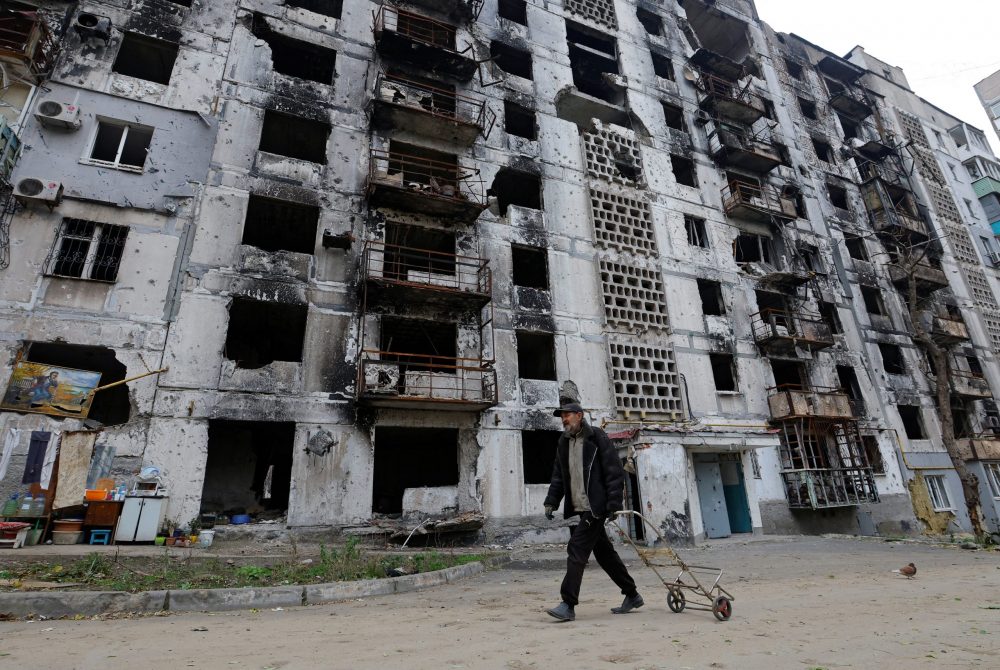 With temperatures falling and the capital Kyiv seeing its first winter snow, authorities were working to restore power nationwide after some of the heaviest bombardment of Ukrainian civilian infrastructure in nine months of war.

The United Nations has warned of a humanitarian disaster in Ukraine this winter due to power and water shortages.

“Unfortunately Russia continues to carry out missile strikes on Ukraine’s civilian and critical infrastructure. Almost half of our energy system is disabled,” Shmyhal said.

He was speaking at a joint news conference with a vice-president of the European Commission, Valdis Dombrovskis, who offered Ukraine the 27-nation bloc’s “unwavering support” and condemned Russia’s “brutal war” on its neighbour.

Ukrainian President Volodymyr Zelenskiy said earlier about 10 million people were currently without power in a country with a pre-war population of about 44 million. He said authorities in some areas ordered forced emergency blackouts.

“The aggressor country has officially recognised that its goal is to destroy our energy infrastructure and leave Ukrainians without electricity and heat,” Ukraine’s national grid operator Ukrenergo said on the Telegram messaging app.

Russian forces swept into Ukraine on Feb. 24 in what it said was a special military operation to eliminate dangerous nationalists. Kyiv calls Moscow’s action an unprovoked imperialist land grab.

Thousands of Russian men have fled abroad to escape conscription to a conflict which has killed thousands, displaced millions, turned cities to ruins and reopened Cold War-era divisions.

Russian forces plundered areas of the southern Kherson region that are now back under Ukrainian control following a recent counter-offensive, the deputy head of Zelenskiy’s administration said.

“After a trip to the… Kherson region, one thing became clear – our people there need a lot of help. The Russians not only killed and mined but also robbed all the cities and villages. There is practically nothing there,” Kyrylo Tymoshenko said on Telegram.

A Reuters witness heard explosions in the centre of Kherson city on Friday morning and saw black smoke rising from behind buildings. Police blocked off access but the commotion did not seem to faze hundreds of people on the central square as they queued for humanitarian aid.

The square had been a frenetic melee of humanitarian aid queues and displays of patriotism on Thursday as residents celebrated their liberation from months of Russian occupation but the mood was also one of deep uncertainty.

“We’re fine, but we don’t know what to expect. Nothing is over yet. On that (east) bank of the river, the (Russian) forces are gathering. On this side, they are gathering. We are in the middle,” said Ihor, 48, an unemployed builder.

Investigators in liberated areas of Kherson region have uncovered 63 bodies bearing signs of torture after the Russian forces left, Ukraine’s interior minister was quoted as saying.

The Ukrainian parliament’s human rights commissioner, Dmytro Lubinets, released a video of what he said was a torture chamber used by Russian forces in the Kherson region, including a small room in which he said up to 25 people were kept at a time.

Reuters was unable to verify the claims made by Lubinets and others in the video. Russia denies its troops deliberately attack civilians or have committed atrocities.

Mass burial sites have been found in other parts previously occupied by Russian troops, including some with civilian bodies showing signs of torture.

Russia, for its part, accused Ukraine of executing more than 10 Russian prisoners of war with direct shots to the head.

The defence ministry was responding to a video circulated on Russian social media which it said showed the execution of Russian POWs.

“This brutal murder of Russian servicemen is neither the first, nor the only war crime,” the ministry said.

Reuters was unable to immediately verify either the video or the defence ministry’s claim. There was no immediate response from Kyiv.

Russia has moved some troops from Kherson to reinforce its positions in the eastern Donetsk and Luhansk regions. Ukraine’s military said Russian forces had fired artillery on the towns of Bakhmut and nearby Soledar in the Donetsk region, among others.

Russian fire also hit Balakliya in northeastern Kharkiv region, which Ukraine recaptured in September, and Nikopol, a city on the opposite bank of the Kakhovka reservoir from the Zaporizhzhia nuclear power station, the statement said.

In the first known high-level, face-to-face U.S.-Russian contact since the invasion of Ukraine, Central Intelligence Agency (CIA) chief William Burns delivered a cautionary message this week during talks in the Turkish capital Ankara about the consequences for Moscow of any use of nuclear weapons.

Turkish President Tayyip Erdogan told Russian leader Vladimir Putin in a phone call on Friday that the Ankara talks had helped to prevent “uncontrolled” escalation in the field.

Russia’s deputy foreign minister, Sergei Ryabkov, said Moscow did not rule out further high-level meetings with the United States on “strategic stability”, a term used to mean reducing the risk of nuclear war.

But Ryabkov also said there was nothing to talk about with Washington on the subject of Ukraine. Kremlin spokesman Dmitry Peskov said any summit between Putin and U.S. President Joe Biden was “out of the question at the moment”.