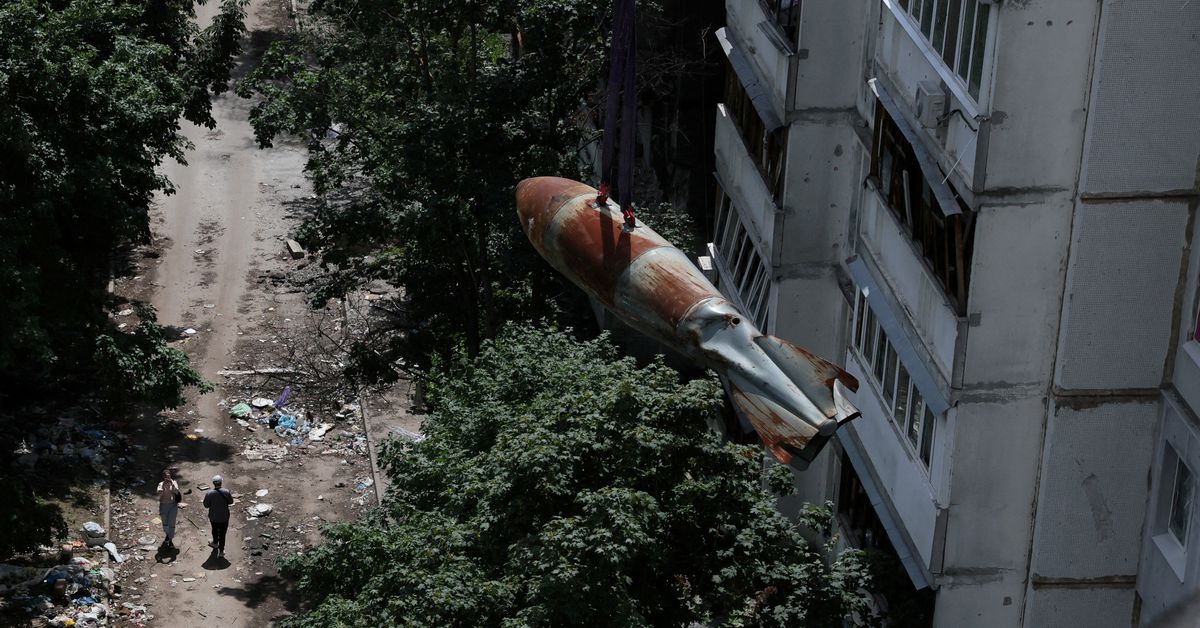 KYIV, June 23 (Reuters) – Ukraine will formally become a candidate to join the European Union on Thursday, a boost for the devastated country’s morale as Russian assaults wear down the defenders of two cities in the eastern Donbas region.

Although the approval of the Kyiv government’s application by EU leaders meeting in Brussels is just the start of what will be a years-long process, it marks a huge geopolitical shift and will anger Russia as it struggles to impose its will on Ukraine.

The expected green light “is a signal to Moscow that Ukraine, and also other countries from the former Soviet Union, cannot belong to the Russian spheres of influence,” Ukraine’s ambassador to the EU, Vsevolod Chentsov, told Reuters.

In the capital, 22-year-old serviceman Volodymyr Yanishan welcomed the move to candidate status. “It means that people almost reached what we have been striving for since 2014 in a bloody fight which cost us much effort… I think the majority will be glad and it means changes for better.”

Mass protests in Kyiv that year ousted Ukraine’s then-president after he broke a promise to develop closer ties with the EU. read more

Friday will mark four months since Russian President Vladimir Putin sent troops across the border in what he calls a “special military operation” partly necessitated by Western encroachment into what Russia considers its sphere of influence.

The conflict, which the West sees as an unjustified war of aggression by Russia, has killed thousands, displaced millions and destroyed cities, while the curtailment of food and energy exports has affected countries across the world.

Britain’s Prime Minister Boris Johnson said Britain was willing to assist with demining operations off Ukraine’s southern coast and was considering offering insurance to ships to move millions of tonnes of grain stuck in the country. read more

Russia has focused its campaign on southern and eastern Ukraine after its advance on Kyiv in the early stages of the conflict was thwarted by Ukrainian resistance.

The war of attrition in the Donbas – Ukraine’s industrial heartland – is most critical in the twin cities of Sievierodonetsk and Lysychansk, which sit on opposite sides of the Siverskyi Donets River in Luhansk province.

The battle there is “entering a sort of fearsome climax”, said Oleksiy Arestovych, an adviser to Zelenskiy.

Luhansk Governor Serhiy Gaidai said separately that all Lysychansk was within reach of Russian fire and the Ukrainian troops there might retreat to new positions to avoid being trapped.

People watch as a defused 500kg bomb that did not detonate when it landed on an apartment building in March, is lowered from the roof by members of a specialised team that defuses and removes explosives, bombs, mines and other munitions in the Saltivka neighbourhood, as Russia’s attack on Ukraine continues, in Kharkiv, Ukraine, June 23, 2022. REUTERS/Leah Millis

Russian-backed separatist forces said there was fierce fighting underway around Ukrainian positions in Hirske, which lies on the western side of the main north-south road to Lysychansk, and Zolote, another settlement to the south.

Ukrainian forces were defending Sievierodonetsk and nearby Zolote and Vovchoyrovka, Gaidai said, but Russian troops had captured Loskutivka and Rai-Oleksandrivka to the south.

Hundreds of civilians are trapped in a chemical plant in Sievierodonetsk while Ukraine and Russia dispute who controls the bombed-out city.

A river port and ship-building centre just off the Black Sea, Mykolaiv has been a bastion against Russian efforts to push West towards Ukraine’s main port city of Odesa.

President Volodymyr Zelenskiy urged Ukraine’s allies to speed up shipments of heavy weapons to match Russia on the battlefield.

Later, Ukrainian defence minister said HIMARS multiple rocket systems had arrived from the United States. With a range of 70 km, the systems can challenge the Russian artillery batteries that have bludgeoned Ukrainian cities from afar.

“Summer will be hot for Russian occupiers. And the last one for some of them,” Defence Minister Oleksii Reznikov tweeted.

SHIELD FOR THE EU

As well as Ukraine, Moldova and Georgia are also seeking to the join the EU in what would be its most ambitious expansion since welcoming Eastern European states after the Cold War.

Russia has long opposed closer links between Ukraine, a fellow former Soviet republic, and Western groupings like the European Union and the NATO military alliance.

Diplomats say it will take Ukraine a decade or more to meet the criteria for joining the EU. But EU leaders say the bloc must make a gesture that recognises Ukraine’s sacrifice.

The country’s move to join the EU runs alongside applications by Sweden and Finland to enter NATO in the wake of the Russian invasion – indications that the Kremlin’s military actions have backfired on its geopolitical aims.