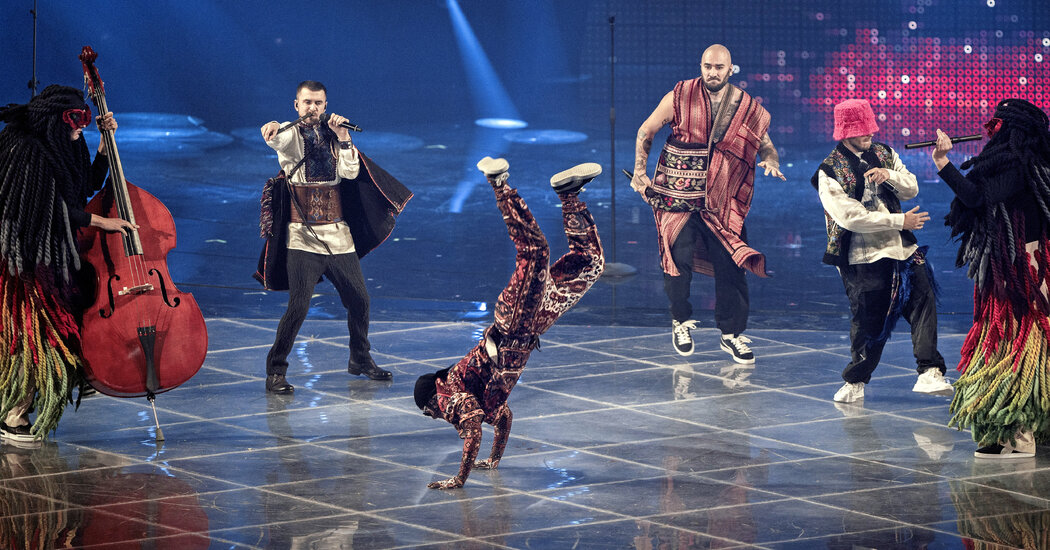 TURIN, Italy — The Ukrainian rap and folk band Kalush Orchestra won the Eurovision Song Contest on Saturday, as European viewers and juries delivered a symbolic, pop culture endorsement of solidarity behind Ukraine in its defense against Russia’s invasion.

After 80 days of fighting that has forced millions from their homes, brought ruin to cities and towns across Ukraine’s east and killed tens of thousands, the band won an emotional victory for Ukraine with a performance of “Stefania,” a rousing, anthemic song. Written to honor the mother of the group’s frontman, Oleh Psiuk, the song has been reinterpreted during the war as a tribute to Ukraine as a motherland.

The song includes lyrics that roughly translate to, “You can’t take my willpower from me, as I got it from her,” and “I’ll always find my way home, even if the roads are destroyed.”

After Psiuk performed the song on Saturday night, he put his hand to his heart and shouted, “I ask for all of you, please help Ukraine!” Europe’s voters listened, giving the band 631 votes to win, far ahead of Sam Ryder of Britain, who took second place with 466 votes.

Kalush Orchestra had been considered a favorite, traveling with special permission to bypass a martial law preventing most Ukrainian men from leaving the country.

The band’s victoryover 39 other national acts illustrated how Russia’s invasion of Ukraine has unified Europe, inspiring a wave of weapons and aid deliveries for Ukraine, pushing countries like Sweden and Finland closer to NATO and bringing the European Union to the verge of cutting itself off from Russian energy.

And it underscored just how sweeping Russia’s estrangement from the international community has become, extending from foreign ministries through financial markets and into the realm of culture. After Russia invaded Ukraine in February, organizers barred Russian performers from the event, citing fears that Russia’s inclusion would damage the contest’s reputation.

Eurovision, the world’s largest and possibly most eccentric live music competition, is best known for its over-the-top performances and its star-making potential — it helped launch acts like Abba and Celine Dion to international fame. But as a showcase meant to promote European unity and cultural exchange, it has never truly been separate from politics, though the contests rules forbid contestants from making political statements at the event.

In 2005, Ukraine’s entry song was rewritten after being deemed too political, because it celebrated the Orange Revolution. When Dana International, an Israeli transgender woman, won in 1998 with her hit song “Diva,” rabbis accused her of flouting the values of the Jewish state.

Ukraine also won the contest in 2016 with “1944,” a song by Jamala about Crimean Tatars during World War II. It was also interpreted as a comment on the Russian invasion of Crimea, which took place two years earlier.

And in 2008, when Dima Bilan, a Russian pop star, won Eurovision with the song “Believe,” President Vladimir V. Putin weighed in promptly with congratulations, thanking him for further burnishing Russia’s image.

Russia began competing in the song contest in 1994, and has competed more than 20 times. Its participation had been a cultural touchstone of sorts for Russia’s engagement with the world, persisting even as relations worsened between Mr. Putin’s government and much of Europe.

Before the final on Saturday, several bookmakers had said that Ukraine was by far the presumptive favorite to win. Winners are determined based on votes from national juries and viewers at home.

War has necessitated other adjustments. The Ukrainian commentator for the show, Timur Miroshnychenko, broadcast from a bomb shelter. A photo posted by Suspilne, the Ukrainian public broadcasting company, showed the veteran presenter at a desk in a bunkerlike room, surrounded by computers, wires, a camera and eroding walls that revealed patches of brick underneath. It was not clear what city he was in.

The bunker had been prepared to prevent disruptions from air raid sirens, Mr. Miroshnychenko told BBC radio. He said Ukrainians loved the contest and were “trying to catch any peaceful moment” they could.

Not all ofKalush Orchestra’s team was present in Italy; Slavik Hnatenko, who runs the group’s social media, was in Ukraine fighting. In a recent video interview from Kyiv, Hnatenko said he felt the band’s appearance at Eurovision was “equally important” as his own service in the war.

“It’s a chance to show the world that our spirit is difficult to break,” he said, adding that he intended to watch the contest, if he was not in combat and could get a signal on his cellphone.

In an interview in the days leading up to the contest, Psiuk said that even if Kalush Orchestra won, its members would return to Ukraine. He was running an organization there to provide people with medicine, transport and accommodation, he said. And he was prepared to fight if asked, he said. “We won’t have a choice,” he added. “We’ll be in Ukraine.”