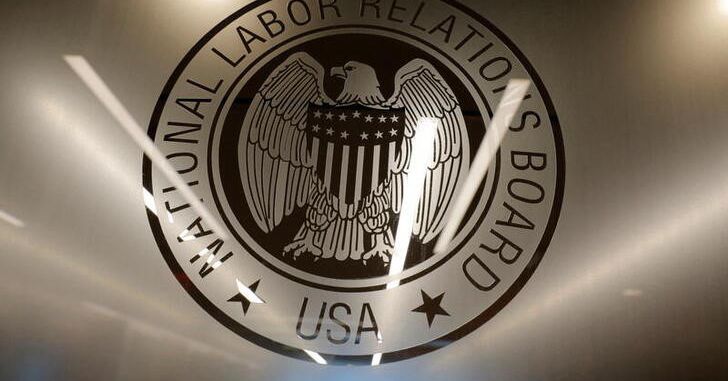 The seal of the National Labor Relations Board (NLRB) is seen at their headquarters in Washington, D.C., U.S., May 14, 2021. REUTERS/Andrew Kelly

(Reuters) – A U.S. labor board has ruled that its staff can toss out petitions seeking union elections and bids by workers to dissolve existing unions once allegations of unlawful conduct are raised, identifying a loophole in Trump-era rules that were seen as a boon to anti-union workers.

The Democrat-led National Labor Relations Board in a decision issued Wednesday rejected an attempt by an employee of a Michigan-based asphalt paving company to revive his petition to decertify a union. The board said the petition was properly dismissed because the union’s related case accusing the company of illegal labor practices was pending.

The Trump-era NLRB adopted rules in 2020 that, among other things, barred agency staff from temporarily blocking union election petitions while a related case was being litigated.

Unions had for decades routinely used so-called “blocking charges” to pause elections they were likely to lose or delay decertification bids by workers.

The Democrats who now control the board are widely expected to revisit the rules. In the meantime, Wednesday’s decision could provide a blueprint for some unions to avoid decertification votes while they litigate their own claims against businesses.

Lawyers for the company, Rieth-Riley Construction Co Inc, and the union did not immediately respond to requests for comment.

The employee, Rayalan Kent, is represented by the National Right to Work Legal Defense Foundation, which regularly represents workers in legal challenges to unions.

Mark Mix, the group’s president, said in a statement that Wednesday’s ruling highlights how the NLRB has for years bolstered the legal rights of unions while ignoring workers’ rights to free choice.

“Rather than apply the letter and spirit of the 2020 Election Protection rule, Joe Biden’s NLRB has undermined and rendered useless even those modest reforms,” Mix said.

Kent filed a petition in 2020 to decertify a bargaining unit represented by an International Union of Operating Engineers local. Kent’s bid came in the midst of a months-long strike and as the company defended against an unfair labor practice complaint from the union, which is still pending.

An NLRB regional director processed the petition and ordered an election, citing the new rules. But he later dismissed Kent’s bid, finding that Rieth-Riley’s alleged misconduct at the center of the separate case had likely caused anti-union sentiment among workers.

Kent and Rieth-Riley appealed to the board, which on Wednesday rejected their claims that as a general principle, petitions for elections or decertification should be allowed to proceed.

Regional directors have long had the ability to dismiss election petitions upon finding that related claims of unfair labor practices have merit, the board said. And the 2020 rule was designed to curb delays in processing the petitions, but not prevent their outright dismissal.

The case is Rieth-Riley Construction Co Inc, National Labor Relations Board, No. 07-RD-257830.

For the petitioner: Alyssa Hazelwood and Amanda Freeman of the National Right To Work Legal Defense Foundation

Dan Wiessner (@danwiessner) reports on labor and employment and immigration law, including litigation and policy making. He can be reached at daniel.wiessner@thomsonreuters.com.