The State Department called out China for its “escalation” in the South China Sea, saying it “directly threatens regional peace and stability,” while maintaining the United States’ commitment to supporting the Philippines.

The People’s Republic of China Coast Guard blocked and used water cannons against Philippine resupply ships en route to Second Thomas Shoal in the South China Sea this week, which the State Department says undermines “security in the region.”

“The United States stands with our ally, the Philippines, in the face of this escalation that directly threatens regional peace and stability, escalates regional tensions, infringes upon freedom of navigation in the South China Sea as guaranteed under international law, and undermines the rules-based international order,” State Department spokesman Ned Price said in a statement Friday.

Price referred to a 2016 move which delivered “a unanimous and enduring decision firmly rejecting the PRC’s claims to Second Thomas Shoal and to waters determined to be part of the Philippines’ exclusive economic zone.” 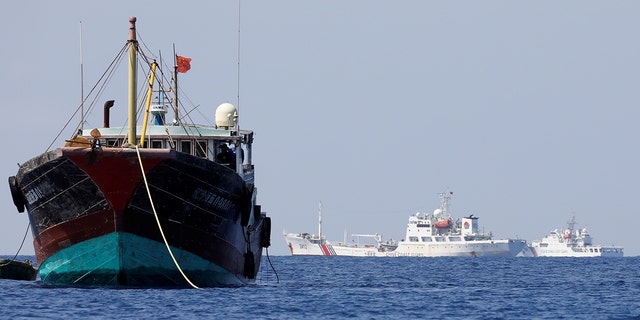 “The PRC and the Philippines, pursuant to their treaty obligations under the Law of the Sea Convention, are legally bound to comply with this decision,” Price said, adding that China “should not interfere with lawful Philippine activities in the Philippines’ exclusive economic zone.”

Price doubled down, saying that “the United States stands with our Philippine allies in upholding the rules-based international maritime order,” and reaffirmed that “an armed attack on Philippine public vessels in the South China Sea would invoke U.S. mutual defense commitments under Article IV of the 1951 U.S. Philippines Mutual Defense Treaty.”

The firm statement from the Biden administration comes just days after President Biden held a virtual meeting with Chinese President Xi Jinping – in what was their third engagement since Biden took office.

It also comes after the latest Fox News Poll shows that a majority of registered voters feel Biden isn’t tough enough on China. 55% of voters disapprove of Biden’s handling of China, and overall, 7 in 10 are extremely, or very concerned, about both China’s military and economic power. 6 in 10 think Biden has not been tough enough on the country.

Meanwhile, Biden administration officials have warned that China is the “only competitor” potentially capable of mounting a “challenge” to the international system.

Burns said the new mission center will bring “a whole-of-Agency response” and will “unify the exceptional work CIA is already doing against the key rival.”