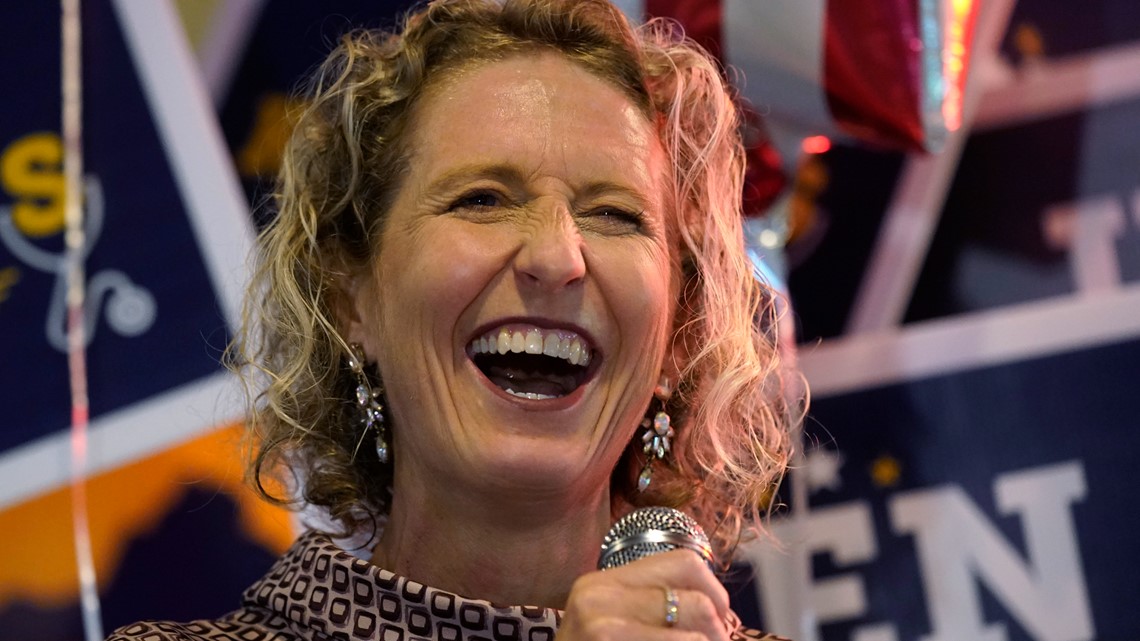 The latest updates as people cast ballots in five U.S. House primary elections across Virginia. Whoever wins today will be on the ballot in the November midterms.

Polling places opened at 6 a.m. Tuesday and stayed open until 7 p.m. Those who were in line at 7 p.m. were still allowed to vote.

Out of Virginia’s 11 congressional districts, five have primary elections. Most of the nominees across the Old Dominion were already picked in nonprimary methods, such as a party convention.

What you need to know for Virginia’s primary day:

Scroll through our live blog below for real-time updates from primary day throughout Virginia. Refresh this page for the most recent information, which will appear at the top of the timeline.

“As a former Navy pilot who served two deployments to the Persian Gulf and a Nurse Practitioner, Jen has led a life of service to her country and her community. During her time in the Virginia State Senate, Jen has represented her voters with integrity, working hard each day to defend their interests. In Congress, Jen will fight for local job creation, keeping healthcare costs down, and limiting government spending.

We look forward to working with Jen over the next five months and once she is in Congress to deliver real results for the Commonwealth. Virginians have had enough of Elanie Luria’s dangerous radicalism, and are ready for a new voice representing them in Washington.”

Terry Namkung, the projected Republican nominee in Virginia’s 3rd District, also got a Twitter shoutout from the national GOP.

Huge win for @TerryNamkung in VA-03!

He will help flip the House red in November! pic.twitter.com/rWiFiYhlHV

“This is our chance to retake control of our country,” Kiggans said. “It’s time to restore American strength in our economy, at our borders, and on the world stage. Now let’s get to work!!”

With 96% of the results reported, Kiggans continues to hold a significant lead with 56% of the vote.

Terry Namkung is the projected winner of the Republican primary election in Virginia’s 3rd Congressional District.

This district covers parts of the cities of Newport News, Hampton, Norfolk, Portsmouth and Chesapeake.

He will face Democratic incumbent Bobby Scott, who will be advancing to the general election in November without a primary election. No one from the Democratic Party signed up to challenge him.

“As a 20-year Navy veteran and former small business owner who puts the people of Coastal Virginia over politics, Elaine Luria has fought to expand health care services and benefits for veterans, secure billions for the defense budget, invest in local infrastructure, and support small businesses and working families.

Jen Kiggans is a political opportunist who will say anything to get elected and put party over the people of Coastal Virginia. Kiggans is an election denier who is more interested in auditing the 2020 election and partisan posturing to score cheap political points than the issues that matter most to Hampton Roads.

Unlike Jen Kiggans, Congresswoman Elaine Luria will continue to be an independent voice in Congress and work with both sides of the aisle to strengthen our national security, protect our democracy, and find solutions that combat rising costs in the short and long term. The people of Virginia’s Second Congressional District trust Elaine Luria and know that she will continue to deliver and do what’s right regardless of the political implications.”

State Sen. Jen Kiggans has emerged as the projected winner of the Republican primary election in Virginia’s 2nd Congressional District, defeating three other candidates with a significant lead.

With over 60% of the results reported, Kiggans leads with 56% of the vote. The Associated Press called the race for her shortly before 7:45 p.m.

After winning this nomination, she’ll face off against Democratic incumbent Elaine Luria in November for the seat in the House of Representatives. The election in this district is expected to be one of the most competitive in the 2022 midterms nationwide.

With nearly 70% of the results reported in the Republican primary for Virginia 3rd U.S. House District, Terry Namkung is leading Ted Engquist 61% to 39%.

Whoever wins this primary will face Democratic Rep. Bobby Scott in November. Election data from the Virginia Public Access Project shows that Scott’s district is a Democratic stronghold.

With 33% of the results reported in Virginia’s 2nd District, State Sen. Jen Kiggans share of the vote slightly dropped from the previous update, but at 58%, she still holds a significant lead over the three other candidates

Jarome Bell comes in a distant second at 25%, Tommy Altman is third at 14% and Andy Baan is fourth at 2%.

Election officials are starting to report results from several Virginia U.S. House primaries, but it’s still too early to say where the outcome is heading.

With 9% of the results in Virginia’s 2nd Congressional District reported, State Sen. Jen Kiggans is leading with 63% of the vote and Jarome Bell is a distant second at 23%.

In Virginia’s 3rd Congressional District with 6% of the results reported, Terry Namkung is leading Ted Engquist 62% to 38%.

Polls are now closed for the five primary elections in Virginia. Follow along with 13News Now’s election results page to see how Virginians voted.

Elsewhere in Virginia, there are also Republican primaries for Virginia’s 6th and 7th districts, and one Democratic primary in the 8th district.

It’s not too late to cast a ballot in the primary elections in Virginia today. While polling places are open until 7 p.m., if you’re in line at 7, you’ll still be allowed to vote.

As the most populated city in Virginia’s 2nd Congressional District, Virginia Beach is going to play a significant role in the November midterm election.

With less than three hours before polls close, more than 13,500 people have cast a vote in person.

In the June 2020 Republican primary, the city had more than 26,000 votes on Election Day itself.

Elections officials tell me with hours to go before the primary polls close here in Virginia Beach, more than 13,500 people have cast a vote in person.

In the June 2020 Republican Primary, the city saw more than 26,000 votes on Election Day itself. @13NewsNow

We’re hours away from polls closing in the Virginia congressional primaries taking place Tuesday, here’s what voting numbers look like in Virginia Beach, according to elections officials:

-More than 8,500 day-of votes cast, as of 2 p.m.
-More than 3,000 votes cast either early in-person or absentee, with more than 1,500 ballots shipped out but not yet received (as of Saturday).
-General trend– elections officials share– is a higher percentage of absentee votes

2:45 p.m. — What you need to know about the GOP primary in Virginia’s 2nd District

Republicans in Virginia’s 2nd Congressional District will pick someone to face off against Democrat Elaine Luria, who is looking to keep her seat in Congress for a third term.

The Cook Political Report predicts that the race in Virginia’s 2nd Congressional District will be one of the most competitive in the 2022 midterm elections, which historically sees the president’s party lose seats in Congress.

There are four GOP candidates on the ballot in the primary election: Tommy Altman, Andy Baan, Jarome Bell, and Jen Kiggans.

READ MORE: 3 things to know about the Republicans who could face Rep. Elaine Luria in November

READ MORE: Has Trump endorsed anyone? Who Republicans are backing in the Virginia 2nd House District primary