Virginia Gov. Glenn Youngkin joins ‘Fox & Friends’ on Primary Day to discuss the most pressing issues facing voters and the possibility of a presidential bid.

With Virginia’s biennial budget signed, and the state’s congressional primaries in the rearview mirror, GOP Gov. Glenn Youngkin is ready to head out on the campaign trail to help out fellow Republicans.

“I will be out helping out our great nominees,” Youngkin said in an interview with Fox News the day after Republicans settled nomination battles in a handful of competitive congressional districts in Virginia which the GOP hopes to flip from blue to red in November’s midterm elections, as part of the party’s push to recapture the House majority.

“I have said from the very beginning that the road to the majority in Washington runs through Virginia,” Youngkin emphasized. “And I look forward to going to work.

Youngkin energized Republicans nationwide last November, as the first-time candidate who hailed from the party’s business wing edged former Democratic Gov. Terry McAuliffe to become the first GOP candidate in a dozen years to win a gubernatorial election in the one-time swing state that had trended towards the Democrats the past decade. 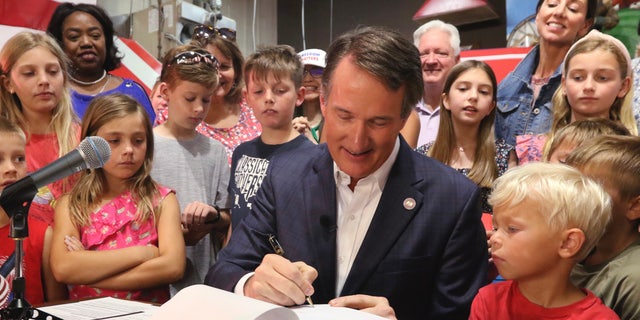 Virginia Gov. Glenn Youngkin signs the budget at a ceremony at a grocery store Tuesday June 21, 2022, in Richmond, Va. The Virginia General Assembly passed the budget earlier in the week. (AP Photo/Steve Helber)

The governor spoke to Fox News Digital the day after signing Virginia’s two-year budget, which included a massive tax cut as well as increased spending for schools and law enforcement.

But Youngkin added that “this $4 billion of tax cuts goes a long way, but I want five, and I will come back and work on the other billion as soon as we get back in session in January. I do believe that we need to do more. And I think part of the opportunity going forward is to generate a far clearer understanding that Virginia is over taxing people.”

While the GOP swept control of the governor, lieutenant governor, and attorney general offices as well as the lower house of the Virginia legislature in last year’s elections, the Democrats retained the majority in the state Senate. 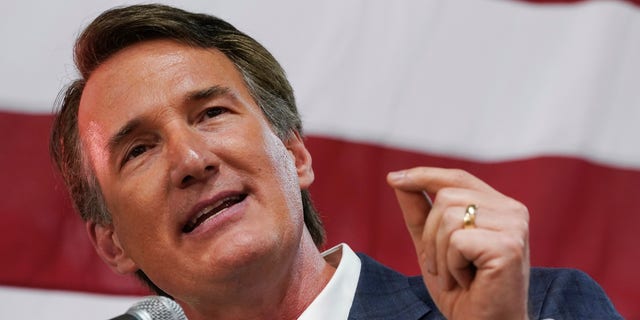 Virginia Gov. Glenn Youngkin speaks prior to signing the budget at a ceremony at a grocery store Tuesday June 21, 2022, in Richmond, Va. The Virginia General Assembly passed the budget earlier in the week. (AP Photo/Steve Helber)

“I’m frustrated with Senate Democrats in Virginia,” Youngkin emphasized. And he charged that “they continue to stand in the way of common-sense things like a three-month holiday and our gas tax. And beyond me why Senate Democrats will not support that…I do believe that they’re frustrated that we’ve accomplished so much in such a short period of time, and they continue to put their political interests ahead of Virginians.”

As Youngkin returns to campaign mode to help fellow Republicans, his travel itinerary will also take him far from Virginia. He’s heading to Nebraska early next month to deliver the keynote address at the Nebraska Republican Party’s state convention, and to campaign on behalf of GOP gubernatorial nominee Jim Pillen.

Youngkin also praised the Republican Governors Association, which works to elect and re-elect GOP governors. “I will tell you from a first-term, first time candidate perspective, the RGA is incredibly valuable. They helped me in all aspects of our campaign…. I’m going to help the RGA in every aspect so we can get Republican governors elected across the country.”

Asked if he would seek a leadership role in the RGA in the coming years, the governor quickly answered “absolutely.”

Following his election last November, there was instant buzz regarding Youngkin as a possible contender for the 2024 GOP presidential nomination. And his upcoming campaign travels outside Virginia will only increase the speculation. Iowa, New Hampshire, South Carolina, and Nevada — the first four states to hold contests in the next Republican presidential nominating calendar — all hold gubernatorial elections this year.

Youngkin said “the short answer is possibly” when asked if he would be traveling to any of those states to campaign for fellow Republicans.

But the governor once again deflected any talk a presidential run, telling Fox News for the second time this week that “I’m always humbled when people ask me about 2024. But my intention is very much on Virginia, very much on 2022 elections, and doing all I can to help.”