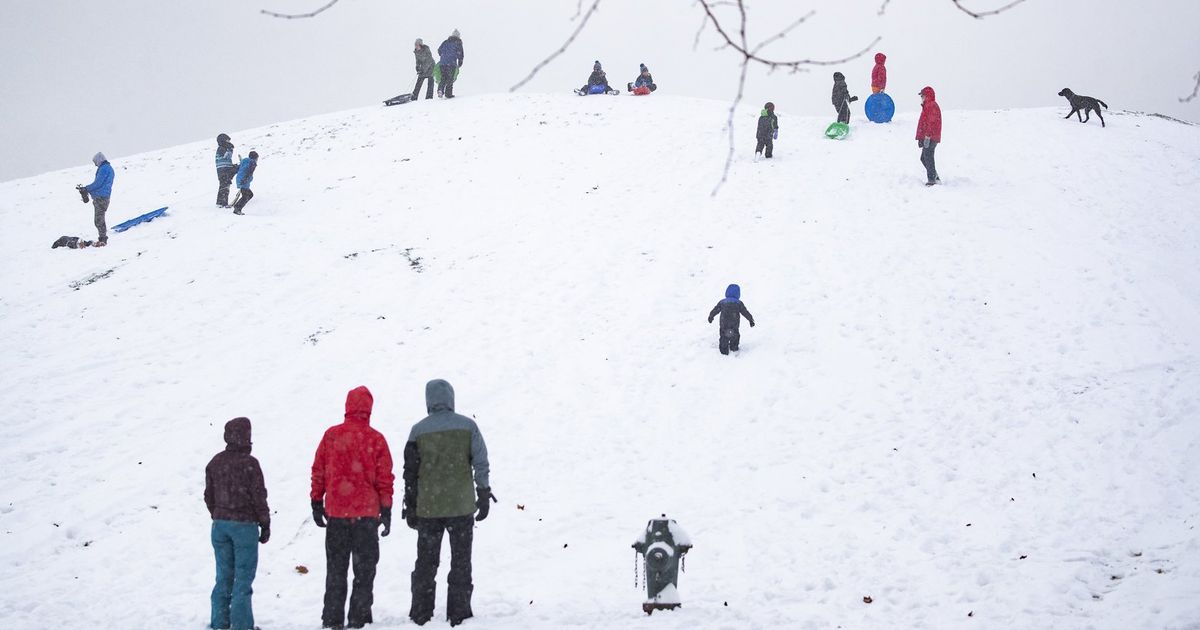 We’re updating this page with the latest news about the weather and its effects on the Seattle area.

Amid a civil emergency and the coldest temperatures in years, outreach to people living in encampments is underway. The city of Seattle also has added four nighttime severe weather shelters, totaling six shelters.

The city previously announced last week space for around 200 people at the Exhibition Hall at Seattle Center and the Compass Center in Pioneer Square. While some of the shelters were open on Sunday evening, all six will be open Monday evening through Wednesday.

Chains are required for Snoqualmie Pass on Interstate 90 for all vehicles except “all-wheel drive” vehicles, the Washington State Department of Transportation announced Sunday night.

The requirement was in effect from North Bend to Gold Creek. The department warned motorists to expect added travel time and delays due to adverse weather conditions.

Keith Hughes, the commander of the West Seattle American Legion Post 160, has been managing a shelter with limited space for the local homeless population. The staffing shortage has not spared his operation, which is being run entirely through the help of volunteers, he said.

“I hope that in the future, the awareness with the city and the county will include all areas of Seattle, not just the downtown core,” he said.

Around eight people, a mix of regulars and newcomers, stayed at his shelter on Christmas evening. He expects that number to increase as the week continues and temperatures drop.

The network, which is comprised of about 60 high-ridership buses, is a lower level of service than Metro’s snow routes protocol, which was in place Sunday.

When buses move to snow routes, they skip some stops and avoid hills. When Metro activates the Emergency Snow Network, some buses don’t run at all.

The network will activate at 4 a.m. Monday. Details about the network are available here.

To discourage unnecessary driving in the snow and cold, metered street parking in Seattle will be free Monday, city officials announced Sunday night. In other words: You don’t need to move your vehicle to avoid a parking ticket.

Monday will be “treated as a holiday for on-street parking,” according to a city update. “It will be a free parking day, and time limits will not enforced unless specifically stated.”

King County Superior Court and Seattle Municipal Court will be closed Monday, Dec. 27, due to inclement weather. Scheduled in-custody arraignments will be held at the King County Jail Courtroom.

Snowfall looks to be leaving Seattle behind as the weather moves east, according to the National Weather Service.

A winter storm warning remains in effect for southwest Washington, where a cold front pushing in from Canada could meet up with precipitation off the Pacific Ocean for up to 4 more inches of snow through Sunday night.

Temperatures in the Seattle area are still expected to drop into the teens Sunday night, with wind chill that feels as cold as 11 degrees. A little more snow in Seattle is still possible — forecasts predict less than half an inch.

Seattle Children’s hospital will close its urgent care facilities at 5 p.m. because of the weather.

The Snohomish County Health District will close its drive-through COVID-19 testing sites in Everett and Lynnwood Monday because of snow and freezing temperatures. Information about other testing locations in Snohomish County is available here.

Wondering about whether the snow on the streets in your Seattle neighborhood have been plowed? Check this out.

The city has an online map that shows which streets are closed, which have been serviced and which are due to be serviced. The map is updated regularly.

Seattle’s streets are serviced by vehicles with snow plows, salt spreaders and/or de-icing equipment, according to the city’s website.

The city has background information about its snow routes and map here, and there are answers to some frequently asked questions here.

Power outages in North Seattle and in Stevens Pass were resolved by Sunday afternoon, but hundreds remain without power in Whatcom, Snohomish and Jefferson counties.

The Jefferson County Public Utilities District reported outages throughout Sunday morning affecting 137 people, 79 of them in or near Port Townsend.

All Seattle and King County library branches are closed, as snow continues to fall across the Puget Sound region.

“Due to inclement weather, all library locations will be closed Sunday,” Seattle Public Library said Sunday morning on Twitter, not immediately providing information about Monday operations. “We apologize for the inconvenience.”

King County Public Library didn’t post anything on social media but there were no branches open Sunday afternoon, according to the system’s website.

King County Metro has switched to snow routes, which is affecting schedules and bus routes.

The last route will run from Port Townsend at 4:15 p.m., said spokesperson Suanne Pelley. Tomorrow the ferries will run on “alternate schedules” after 13 workers tested positive for COVID-19 this past week.

The poor road conditions due to winter weather are starting to cause problems on the highways.

As of just before noon on Saturday, several collisions had been reported by the Washington State Department of Transportation.

WSDOT is urging everyone to stay home if possible. For those heading to the Seahawks game tonight, you are urged to ride public transportation.

Flights delayed by an hour, on average, at Sea-Tac

Flights out of Sea-Tac Airport are seeing average delays of about an hour, according to the Port of Seattle.

Airport officials are encouraging passengers to check in with their airlines for flights and cancellations before they head to the airport. The top floor of the parking garage is closed, so travelers should consider taking other routes to their flights, airport spokesperson Kate Hudson said.

Sixty flights out of Sea-Tac are seeing delays and 20 flights have been canceled, according to flight tracking website FlightAware. Each airline is responsible for de-icing its own aircraft, Hudson said.

A power outage has cut electricity to 111 people around Stevens Pass, according to the Chelan County Public Utilities District.

An earlier outage Sunday morning hit 2,943 people in Seattle’s Bitter Lake neighborhood, though Seattle City Light has since restored power to 300 people. Officials are still investigating the cause.

Two UW Medicine COVID testing sites in Shoreline and at Lake Sammamish State Park are closed today due to the snowy weather. A vaccine clinic at the Auburn Outlet Collection mall has also closed.

Seattle Public Utilities announced Sunday that it has closed both north and south transfer stations due to unsafe road conditions.

SPU also cautions that the winter weather may result in delays in service for trash, recycle and compost collection. Residents are advised to set out collection carts and leave them out the following day. If they haven’t been collected by the following day, bring them back in and then try again the next day.

With wind gusting above 50 mph in Bellingham, wind chill temperatures in Whatcom County have fallen into the negatives Sunday morning, according to the National Weather Service.

Use caution on the roads Sunday morning

The Washington State Department of Transportation is urging people to stay off the roads if possible, but if you must travel today, here are some resources for driving in snow:

Also, for those looking for some snowy outdoor recreation opportunities, please be careful when driving out to the passes, and be discerning about where you park. Read: Don’t be that person who blocks the road so that snow plows can’t get through!

Washington’s Department of Transportation says that drivers should do their best to stay off snowy highways Sunday as a winter storm warning is in effect throughout the Puget Sound.

With snow blanketing the region and colder temperatures expected overnight, emergency shelters are open for people who need a warm place to escape the cold.

Here’s a full list and map of the winter weather shelters available.

The Armory at Seattle Center opens to the public at 10 a.m., and the following day shelters for people experiencing homelessness are also open. Here’s a full list of resources from the King County Regional Homelessness Authority.

Here’s the full story on all additional shelter spaces available.

Snow expected to taper off Sunday in Seattle, forecasters say

Forecasters at the National Weather Service anticipate that snow will taper off Sunday afternoon and evening in the Seattle area as the cold weather system shifts to the southwest.

Still, the northern Olympic Peninsula — which saw 11 inches of snow Sunday morning in downtown Port Angeles — could get another 6 to 8 inches through Monday morning.

A heavy band of snow blanketed Western Washington overnight Saturday, leaving between 2 to 5 inches of snow on the ground throughout King County Sunday morning.

Snow is expected to continue to fall throughout the day, adding up to another 4 inches throughout the Puget Sound, according to government forecasters.

The National Weather Service observed a low temperature of 27 degrees at Sea-Tac Airport Saturday night, but temperatures are expected to dip throughout the day and drop as low as 18 degrees Sunday night.

Whatcom County and the northern Olympic Peninsula saw the most snowfall overnight: Downtown Port Angeles saw 11 inches of snow, while Bellingham is reporting up to 8 inches with wind gusting up to 52 mph.

A weather system moving into Western Washington is filtering in enough cold air to make snow possible in an area that typically doesn’t see too much of it. Waking up to the snow stuck to fire escapes and front steps, Seattleites started posting a flurry of snow day photos to Twitter.

Scenes from a snowy Seattle

All over the Puget Sound region, people woke up to a white, winter wonderland on Sunday morning. Here’s a look at snowy scenes from around the city.