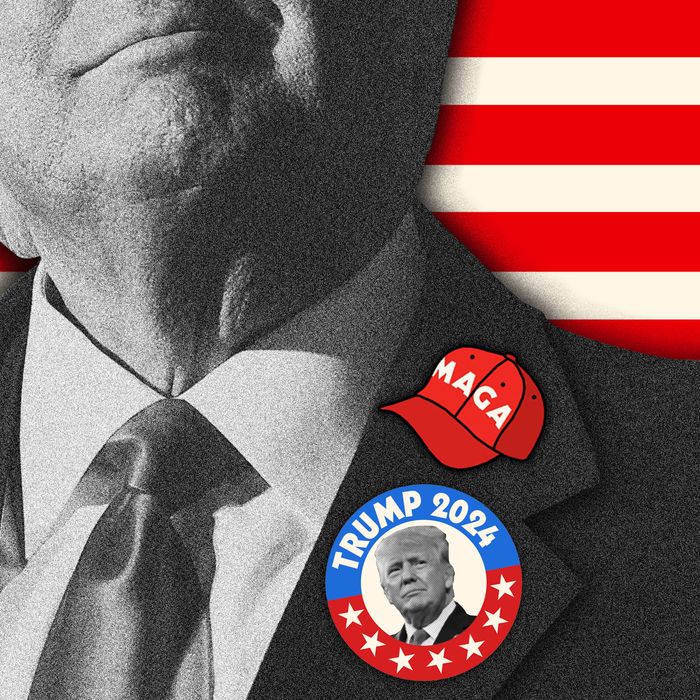 If Trump is less inevitable in 2024, so too may be Joe Biden. Photo-Illustration: Intelligencer; Photos: Getty Images

There’s obviously a lot we don’t know about what happened after Election Day, especially which party controls Congress (though Democrats are currently favored to narrowly hold the Senate while Republicans seem set to narrowly take over the House). But we do know enough to begin to understand how the midterms may affect the dynamics of the next national elections in 2024. And with Donald Trump’s scheduled announcement of a comeback bid on the immediate horizon, the presidential election cycle will formally begin right away. Major assumptions about 2024 may need to be revised based on the evidence still rolling in from precincts around the country. Here are some lessons from this week’s election and their implications for the next one.

All the traditional indicators — from historical midterm trends to the president’s job approval rating to economic conditions — suggested Republicans would make significant gains in 2022, particularly in House races. But even if the GOP gets control of the House, their gains will be underwhelming, particularly compared to the yearlong fears of a Democratic bloodbath and Republicans’ cackling overconfidence.

One can plausibly claim that this outcome reflects a stalemate between the irresistible force of inflation fears and the immovable object of a pro-choice popular majority — i.e., there might have been a big Republican wave had the Supreme Court not struck down Roe v. Wade. But there’s another explanation that better reflects the sum total of recent election cycles: The electorate just isn’t “swinging” much anymore. Amy Walter of the Cook Political Report began making this case before the results lent it even greater credence; after Tuesday, she’s convinced of it:

[A]s I wrote earlier this fall (citing the amazing work of political scientists John Sides, Chris Tausanovitch, and Lynn Vavreck), events and the responses to them from politicians no longer have the ability to deeply and fundamentally reshape our politics or political coalitions. With fewer people willing to ‘defect’, even when they are unhappy with the status quo, you get more close elections and fewer ‘wave’ elections.

This hypothesis rings true in 2022 just as it did after the 2020 elections, when Democrats underperformed expectations in both the presidential and House races. At a fundamental level, the two parties represent basic worldviews, not just particular politicians, policies, or “governing” and “non-governing” entities. Add in polarization, which increases the distance between “red” and “blue” worldviews, and there just isn’t much neutral ground to negotiate in drifting from one giant coalition to the other. So even if you are a Democrat who thinks Joe Biden is doing a poor job as president, it may have zero effect on voting conduct.

The “calcification” (as Walter puts it) of party differences can also be self-reinforcing, as Ron Brownstein recently observed:

If the demographic, generational and geographic alignments within the electorate on display again this year cannot be dislodged by events as momentous as a once-in-a-lifetime pandemic, or once-in-a generation inflation, or a Supreme Court decision overturning of the 50-year constitutional right to abortion, it is not clear what can reconfigure them. The real signal from this year’s election may be that American politics is fated for years to remain caught on what UCLA political scientist Lynn Vavreck calls “the knife’s edge” between two increasingly divergent, and even hostile, political coalitions.

Perhaps that’s not accurate, and what happened in both 2020 and 2022 was a series of highly turbulent swings between the two parties that just happened to reach equipoise on Election Day. Indeed, that’s what a lot of political journalism with its focus on “game changes” would suggest. But with each close election that interpretation becomes less persuasive. Certainly presidential elections — like the landslides of 1972 and 1984, or even the more modest big wins of 1996 and 2008 — are hard to imagine in the immediate future.

The biggest dog that didn’t bark in 2022 was a big falloff in voting by large segments of the electorate, particularly those favoring Democrats. We obviously don’t have anything like final turnout figures, but general indications are a level and shape of participation that is more like 2018 than like 2010 or 2014. After the 2014 midterms I wrote an entire book mostly focused on the possibility that Democrats were going to be handicapped for a long time by their reliance on voters who just don’t show up for non-presidential elections. But that changed in 2018; the percentage of under-30 voters participating in that midterm nearly doubled from 2014 levels, and less surprisingly stayed high in 2020, which was great for Democrats because young voters also went heavily for their candidates.

Despite alarums based on their unhappiness with Joe Biden and their low participation in early voting, young voters showed up again in 2022, representing roughly the same percentage of the electorate as in 2018. And preliminary indications are that overall turnout remained high; in states with very competitive statewide contests, it often exceeded 2018’s, which was the highest midterm turnout since 1914.

The turnout phenomena of 2018 and 2020 was often attributed to Trump’s presence in the White House. But he wasn’t on the ballot in 2022, and kept (for him) a relatively low profile in the run-up to the election. We may simply be dealing with an electorate that is, and may remain, engaged with voting. Part of that is polarization and the perpetual sense that every election is high stakes; as Amy Walter put it, “when every election is an existential election, the drop-off among ‘in-party’ voters, which was once common in midterm elections, is no longer the case.” Part of elevated turnout could also be the voter-registration crusades of the last few years and the spread of “convenience voting” (early voting in-person and by mail).

The bottom line for the Democrats who are celebrating what looks like a narrowly missed midterm catastrophe is that elevated turnout from its voter groups, especially the young voters who are a large and heavily pro-Democratic bloc, can perhaps offset the continuing erosion of their support among nonwhite — and particularly Latino — voters.

If the entire electorate apparently doesn’t “swing” much, 2022 did show that voters might still “swing” in individual contests where candidate quality varied a lot. One of the most surprising things we saw in this cycle was the modest but quite significant return of ticket splitting. (By “modest,” I mean it by no means resembles the level of ticket splitting that used to occur, for example, among conservative southern Democrats who routinely voted Republican in presidential elections.) In most recent elections, party-line voting reigned supreme (in 2016 not a single Senate candidate won a race in a state that the party’s presidential candidate didn’t carry, and there was only one such race in 2020). But as FiveThirtyEight illustrated in a chart, variation between Senate and gubernatorial candidates, particularly among Republicans, was pronounced in 2022.

Ironically, the polarization of the electorate into two equally matched warring camps has made the swing voters that do exist even more important. As my colleague Eric Levitz explained:

Rates of ticket splitting may have declined. But there are still a great many voters who support Republicans for some positions and Democrats for others. And since the American electorate is narrowly divided between the two parties, these swing voters wield decisive influence over elections. Indeed, early analyses of Tuesday’s election suggest that the Democrats’ success Tuesday night derives less from turnout than persuasion: The electorate yesterday was significantly more Republican than Democratic in terms of party registration, but it did not vote that way.

And that’s an important post-election grievance for Republicans. Accurately or not, a lot of them look at the big gaps between the performance of their Senate and gubernatorial candidates in Georgia, New Hampshire, and to some extent Arizona, and blame candidate quality for the failure to flip the Senate on November 8. Even in states where they lost both races (like Pennsylvania), and where they won both races (like in Ohio), evidence of ticket splitting suggests candidate quality matters more than was previously understood. That has major implications for 2024, and for the man so many Republicans clearly blame for the candidate-quality problems the GOP experienced this year.

The House landscape, of course, will be much like today’s: closely balanced between the two parties. The renewed importance of candidate quality means the top of the ticket could matter a lot. That’s most obviously true for Democrats who will need some real help to hang onto the Senate and the White House while aiming at House gains that could together restore the trifecta they won in 2021. But it’s also true of Republicans who have fallen short of achieving their hopes and dreams in three straight cycles, ever since Donald Trump was elected president.

Right now we are hearing a lot of talk among (and about) Republicans who are disenchanted with the 45th president and aren’t happy about his plans for a 2024 comeback. Some of them sincerely blame him for sticking them with questionable Senate candidates like Mehmet Oz, Herschel Walker, and Blake Masters, or more generally for making MAGA extremism so evident that it interfered with what would have otherwise been a simple referendum on an unpopular President Biden. Others have been chafing at his domination of the GOP and are using the midterm disappointment as a lever to dislodge him from 2024 inevitability in favor of some apparently less problematic nominee like Ron DeSantis or perhaps a wide-open nomination contest. But for whatever reason, they no longer believe they are going to ride to a straightforward partisan victory in 2024 under the banner of the man who supposedly ran the economy with such panache. Electability matters again, and having lost his air of invincibility in the midterms, Trump is not obviously the most electable presidential candidate the GOP could select.

Fresh concern with electability may spread to Democrats as well. Yes, Biden is in far better shape than he was prior to November 8. He will not approach his 80th birthday on November 20 as the failed leader of an overwhelmingly repudiated party. But going forward, Democrats could use a popular leader, not just a leader whose unpopularity they can manage to overcome just barely. And Biden ’24 is very clearly linked to Trump ’24: Biden is, after all, the only Democrat who has ever beaten Trump, and he clearly feels he has taken the would-be tyrant’s measure. If Republicans dump Trump or even open themselves to a competitive 2024 nomination contest, then 2020’s most electable Democrat may be viewed in a very different light.

So as the final results drift in and full analysis of the midterms becomes possible, don’t be shocked if the “surprising” 2022 results make the idea of a Biden-Trump rematch less likely.

Daily news about the politics, business, and technology shaping our world.

By submitting your email, you agree to our Terms and Privacy Notice and to receive email correspondence from us.