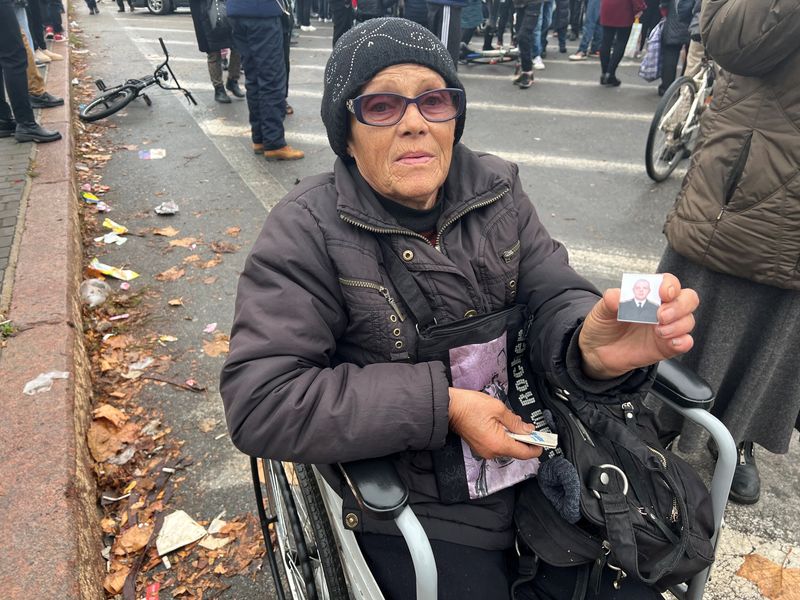 KHERSON, Ukraine (Reuters) – Clutching aid she’d received at a crowded humanitarian distribution point in Ukraine’s liberated city of Kherson, Anna Voskoboinik, a one-legged woman in a wheelchair, finds it hard to imagine life without her only son.

Russian forces, she said, arrested Oleksii, 38, a former soldier, three months ago at a checkpoint and never released him before they pulled back from the right bank of the Dnipro River after occupying the city for almost nine months.

“Where is he now? I don’t know. I would go to the end of the world to find out. He’s my only son. He was always nearby. Now…” she said, tearing up.

In the chaos of a retaken city with no power, running water or proper mobile signal and where the thud of artillery fire still sounds, attention is turning to hundreds of people thought to be in Russian custody or unaccounted for.

They include people like Voskoboinik’s son, whose whereabouts are a mystery, and residents who were arrested by Russian forces during the occupation and taken farther away.

Authorities say it is impossible to estimate their numbers in a vast liberated area where communications are patchy, mines are a threat and fighting still rages with Russian troops across the river.

Russia regards Kherson as its territory and subject to its laws after it staged a “referendum” that was condemned as an illegitimate farce by Kyiv and the West.

Ukraine has registered cases of abduction or disappearance of more than 900 people in Kherson region since the war began, the regional prosecutor’s office said. Those include local politicians, priests and regular citizens.

Of that total, 480 people were released, but 379 remain in Russian custody, the prosecutor’s spokeswoman Anastasia Vesilovskaya said. Almost 400 civilians have been killed in unspecified Russian war crimes in the region, she added.

Zhdanov told Reuters the number of missing could be much higher.

“Unofficially, it could even be thousands, if we include the dead … We just can’t establish the number now. When the territory is completely de-occupied, we’ll be able to establish this,” he said.

Russia’s defence ministry did not immediately respond when asked about individual cases and the overall number of missing in Kherson.

Nationwide, the Hague-based International Commission on Missing Persons estimates that more than 15,000 people have gone missing, including detainees, those separated from their loved ones and people killed and buried in makeshift graves.

Voskoboinik tried to piece together the story of her son by speaking to a cell mate who had been held with him.

She said she was told her son had been drinking and was stopped at a checkpoint where his sheepdog grabbed the trouser leg of a soldier. The dog was shot dead, her son complained and was promptly arrested and taken to a police station, she added.

“I’ve already asked everyone (where he is) – the military, the police … to help me find my son.”

At the Cathedral of St. Catherine down the road from the wreckage of Kherson’s TV tower, Father Petro said Ihor Novoselskyi, a fellow priest of the Ukrainian Orthodox Church, was arrested by Russian forces on Aug. 29 and taken away.

He said he did not know where Novoselskyi, a relative who preached at the church in the village of Tokarivka on the Dnipro’s right bank, was or exactly why he had been arrested.

He added that Novoselskyi had turned 50 while in custody.

Maria Zaporozhets, a Kherson resident who left for Ukrainian-controlled territory in April, said her cousin Pavlo Zaporozhets, 32, had been arrested in the southern city on May 9, the day Russia marks Soviet victory in World War Two.

Speaking by telephone, she said the former soldier was held for three months and tortured in the basement of a police facility in Kherson at No. 3, Energy Workers’ Street, and accused of “terrorism” under the Russian criminal code.

That facility was dubbed “the Yama” – “hole” in English – by some during the occupation and it gained notoriety in the city as dozens of residents alleged they were tortured there by Russian occupying forces.

Moscow has rejected allegations of abuse against civilians and soldiers, and has accused Ukraine of staging such abuses in places like Bucha.

Maria said Pavlo was taken in August to Crimea, the Russian-controlled Ukrainian peninsula that was annexed by Moscow in 2014, and placed in SIZO-1, a pre-trial detention facility, in the city of Simferopol.

He was assigned a Russian lawyer who refused to speak to Pavlo’s relatives, she said. The family raised the money for their own lawyer from whom they found out the details of the case. She believes her cousin is now in SIZO-2.

He could face up to 20 years in Russian jail, she said, adding that Pavlo changed the testimony he had given against himself under duress when the new lawyer took on his case.

“Our hope is only on a prisoner swap,” she said.