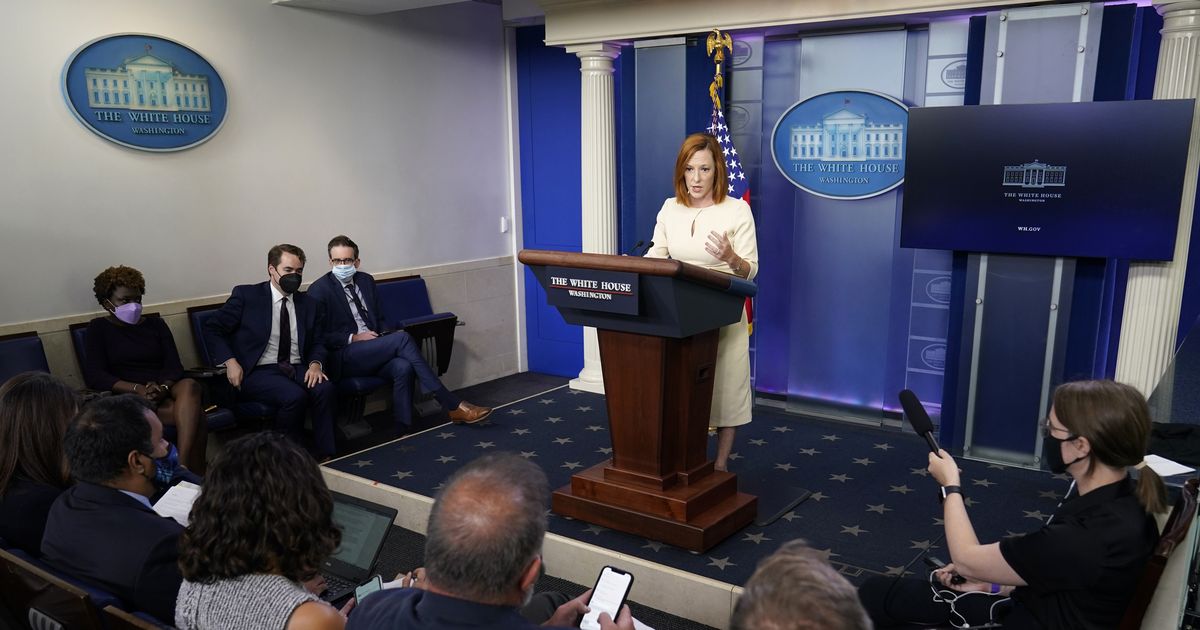 WASHINGTON – Weeks after allowing passenger flights from Canada to the United States, the Biden administration has not explained why Canadians can’t make similar trips in a car.

Congressional Democrats and Republicans alike have criticized the policy as affecting struggling border communities in their districts.

Asked about the issue in Monday’s White House press briefing, Press Secretary Jen Psaki declined to say why the administration has not heeded calls from prominent Washington Democrats – including Sen. Patty Murray and Gov. Jay Inslee – to ease the border restrictions or at least grant an exemption for the isolated border community of Point Roberts.

“It’s determined by our public health officials,” Psaki said in response to a question from The Spokesman-Review. “Our objective, of course, is to return to overland travel, just like we’re working toward returning to international travel, but we leave it to them to make that determination.”

Psaki’s response came after the White House on Aug. 10 referred questions about the border closure to the Department of Homeland Security, which declined to elaborate beyond the agency’s Sept. 21 announcement on Twitter that the restrictions would stay in place until Oct. 21 to reduce the spread of COVID-19.

“In coordination with public health and medical experts, DHS continues working closely with its partners across the United States and internationally to determine how to safely and sustainably resume normal travel,” the announcement said, noting that the decision “may be amended or rescinded prior to (Oct. 21), based on public health considerations.”

Under the policy announced Sept. 20 by White House COVID-19 Coordinator Jeff Zients, Canadians can travel to the United States by air if they show proof of vaccination and a negative coronavirus test within three days of their departure. Canada reopened its land border Aug. 9 to nonessential travel by Americans who meet those same conditions, but despite Canada’s higher vaccination rate and lower COVID-19 transmission rate, Canadians can’t cross the border in the other direction.

The restrictions have strained the economies of U.S. border towns that rely on Canadian visitors, none more so than Point Roberts, a tiny “exclave” on a peninsula in Whatcom County that can only be accessed by land through Canada. In a Sept. 24 letter to President Joe Biden, Inslee noted that 85% of the economy of Point Roberts depends on commerce from Canadians.

The state of Washington’s Commerce Department on Monday launched an emergency grant program for businesses along the border suffering “real and lasting harms” from the restrictions, as the governor wrote to Biden with a plea to grant an exemption for Point Roberts or at least a partial reopening of the border for nonessential travel from Canada.

Rep. Suzan DelBene, a Democrat whose district stretches from King County to the Canadian border and includes Point Roberts, said in a statement Monday she remains “extremely frustrated that the White House has failed to sufficiently explain its position on our northern border.”

“How can it follow the science when a Canadian can fly from Vancouver to Seattle but not drive from British Columbia to Whatcom County?” DelBene asked. “The administration should make an immediate exemption for fully vaccinated Canadians to travel into Point Roberts and bring its northern land border policy in line with the new regulations around air travel from Europe and elsewhere.”

“The lack of clear, consistent policy regarding the pandemic is the only thing President Biden has been consistent in,” Newhouse said. “Allowing travelers to enter our country on airplanes after spending close quarters with thousands of people while banning lone travelers coming by car is completely nonsensical. It’s time for President Biden to acknowledge the progress our communities have made and to implement science-based policies – not emotional ones.”

Murray, the third-ranking Democrat in the Senate, took to the Senate floor Sept. 23 to call for an exemption for Point Roberts and said in a statement she has appealed directly to Zients and Homeland Security Secretary Alejandro Mayorkas.

“As I’ve said to everyone who will listen, Point Roberts must at least have a border exemption as we work to safely reopen the U.S.-Canada border,” Murray said. “Its small businesses and its economy can’t survive without one.”

“I’ve spoken directly with everyone from the Secretary of DHS to the White House COVID-19 Response Coordinator about this and still no one has explained to me what evidence is being used to support the continued land border restrictions, particularly as it relates to an exemption for Point Roberts – that’s absolutely unacceptable to me.”

Complaints about the border rules haven’t been limited to lawmakers from the Northwest. A bipartisan group of 24 House members – including Reps. Cathy McMorris Rodgers of Spokane and Russ Fulcher, who represents North Idaho – sent a letter to Biden in January. Sen. Jon Tester of Montana led a group of seven other Senate Democrats in another letter to Biden on Sept. 17.

The Biden administration is expected to announce an extension or end to the border restrictions before they expire Oct. 21.

Global Affairs Canada, the Canadian government’s foreign affairs department, said in a Sept. 16 statement that while “Canada respects the right of the United States to determine its border restrictions,” the country has “consistently advised against non-essential travel outside of Canada since March 2020.”

S-R reporter Laurel Demkovich contributed to this report from Olympia.