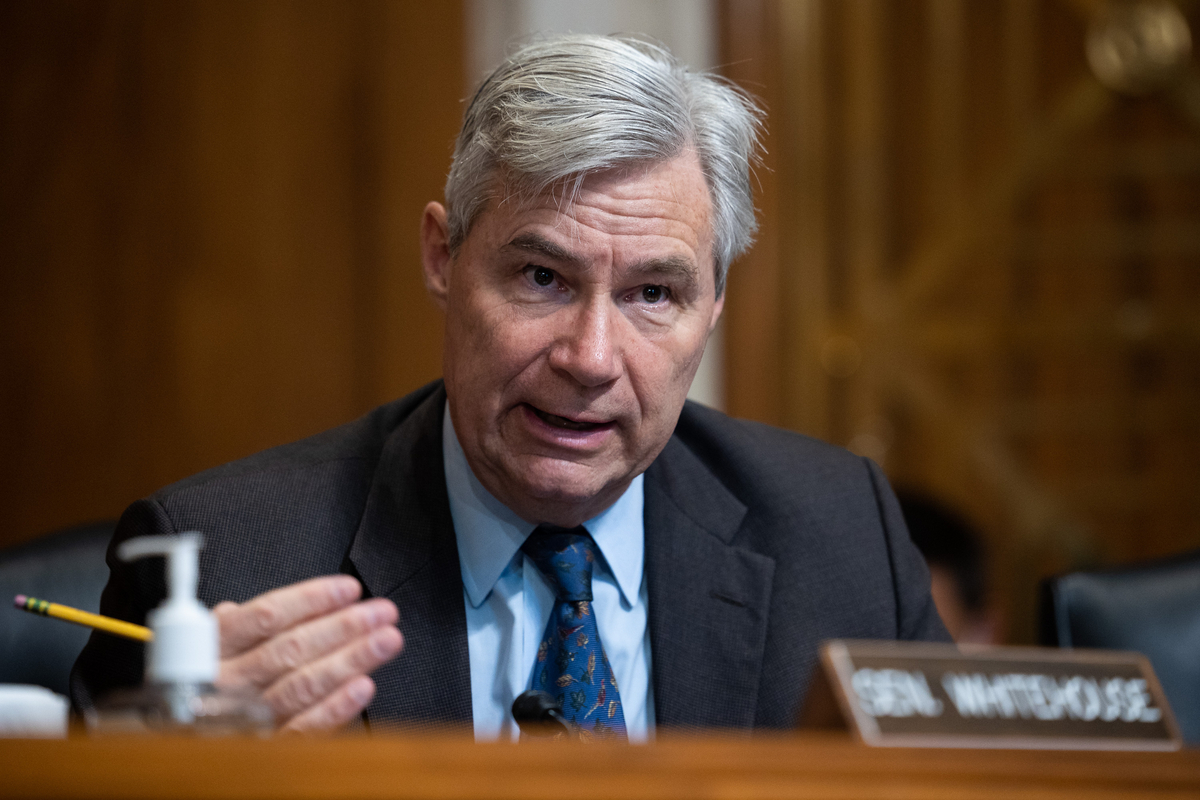 Sen. Sheldon Whitehouse said he plans to introduce a new carbon border fee in the coming weeks, as talk about the policy heats up on Capitol Hill.

The Rhode Island Democrat, a prominent climate hawk, said the bill would enact a border adjustment — effectively an import tariff on carbon-intensive goods — without an explicit domestic carbon price, a longtime sticking point in development of the policy.

The idea, he said, would be to draw bipartisan support. Republicans have of late seemed open to the idea of a carbon border adjustments as an anti-China geopolitical policy (E&E Daily, May 4). Whitehouse said he plans to introduce the legislation “within the next 10 days or so.”

“It’s a carbon tariff on imports of the major energy-intensive goods, like iron and steel and aluminum and cement, glass, pulp paper, fossil fuels themselves, petrochemicals, fertilizer,” Whitehouse said during an event yesterday with sustainability group Ceres.

He added that “to the extent that the foreign suppliers are above the American average for emissions, something we’d ask Treasury to calculate, they would pay a tariff based on the overage emissions above our average,” Whitehouse added.

The price of the tariff, he said, would be modeled on the federal government’s social cost of carbon, which measures the per-ton economic harm of carbon emissions. Whitehouse has previously introduced carbon pricing bills that include a carbon border adjustment, but the new bill would be his first attempt to enact the tariff on its own.

The bill would be the latest attempt to craft a carbon border adjustment that is not tied directly to a domestic carbon pricing regime, a challenge advocacy groups have been grappling with for years.

Without a domestic carbon price, experts have raised concerns that a carbon tariff from the United States would violate World Trade Organization rules and set off a wave of protectionism.

Still, some Republicans, who have long been hostile to carbon pricing at home, have embraced the border adjustment idea as a way to give U.S. companies an advantage and hit polluting industries that have moved to China.

“We wanted to find an alternative way to do this without a straight carbon price in case that became the political hazard,” Whitehouse said yesterday.

And as Whitehouse noted yesterday, the European Union is set to enact its own carbon border adjustment in the coming years. That could be “a potential forcing event,” he said.

Whitehouse is still hoping the policy could be wrapped up in a revival of Democrats’ party-line climate and social spending bill, which Senate Energy and Natural Resources Chair Joe Manchin (D-W.Va.) effectively killed late last year.

Democrats have insisted for months that Manchin largely agrees with the $300 billion suite of clean energy tax credits included in the reconciliation spending bill. But Whitehouse said they’re also trying to keep the other social spending provisions, including the child tax credit, alive in negotiations with the West Virginia Democrat, which could be a tall order amid rampant inflation.

“The reconciliation bill is not dead,” Whitehouse said. “It is alive and well until Sept. 30,” when time runs out for Democrats to use the budget reconciliation process this year. Though, as Whitehouse noted, the effective deadline is probably before the August recess, given the lengthy process needed to pass such a bill.

Environmental groups and the business community are keeping their hopes alive as well. Ceres is organizing an annual corporate lobbying event this week, with executives from more than 100 major companies meeting with lawmakers to ask for climate and clean energy legislation.

Manchin, meanwhile, has been convening a separate bipartisan group to discuss a potential energy and climate bill, but Whitehouse said that could only help get everyone on board for reconciliation.

A meeting of Manchin’s group that had been scheduled for yesterday was postponed.

“I think the bipartisan discussions are not only useful in and of themselves, but I also think they inform the support of Sen. Manchin and others for climate measures that could be put through reconciliation,” Whitehouse said.

“He may feel much more comfortable about voting for a reconciliation package with a carbon border adjustment in it if he’s had a robust conversation with a lot of Republican colleagues about how that should be structured and that it reflects their sense of ‘That’s a good idea.’”