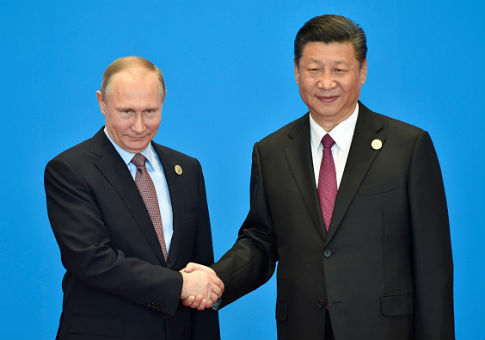 There’s a common assumption that the People’s Republic of China is foursquare behind Russia’s relentless but largely unsuccessful war against Ukraine. This marriage of convenience is supported by the common cause of the two geopolitical giants in opposition to the West and especially the United States. It has consequently been expected that Beijing will lend all possible assistance to assist Moscow in crushing its U.S.-aligned neighbor.

Chinese president Xi Jinping finds the actions of Russia a useful propaganda tool. Putin’s claim that Ukrainian statehood is an artificial construct is the perfect analogue for Beijing’s long-standing position that Taiwan should never be regarded as an independent state and that “there is only one China.”

The reality of Russia’s relationship with China, however, is somewhat different, as two diplomatic missions demonstrate.

The war in Ukraine and the high-stakes geopolitics resulted in two high-level foreign visits made by senior Ukrainian officials to the United States and Russian officials to China in the week leading up to Christmas—interactions that both nations hoped would result in significant support for their interests in the conflict between the two nations.

Ukrainian president Volodymyr Zelensky addressed a joint session of Congress in prime time following one-on-one discussions with President Joe Biden. Zelensky came away from this engagement—his first foreign trip since the invasion began—with pledges of another $47 billion in weaponry and other financial aid.

The same week, Dmitri Medvedev, deputy chairman of Russia’s Security Council, met with President Xi in Beijing. The Russians sought an end-of-the year statement of commitment from the PRC to back Russia to the hilt in this conflict.

Since invading Ukraine, the Russians have seen almost every nation with which it once enjoyed strong diplomatic and trade relations sever its ties with them. Putin looks at an elevated level of support from China as the only realistic hope of counterbalancing Russia’s increased isolation from the West.

But if Medvedev was counting on a firm show of support for Russia’s victory and promises of generous military aid from the Chinese dictator, he came away rather disappointed. China’s government propaganda apparatus took great pains to downplay the visit and not show any official endorsement of Moscow’s invasion.

Reporting on the visit in official Chinese state media, no reference was made to Medvedev having been elected Russia’s president for one term from 2008-2012, his serving as prime minister from 2012-2020, or even his current position on the Russian Security Council.

Instead, the state-run China Daily and other outlets reported that Xi had met with the “Chairman of the United Russia party Dmitri Medvedev,” and that the Russian politician had “visited China at the invitation of the CPC.” United Russia is the pro-Putin party that controls a majority of seats in both the Duma and the upper house, the Federation Council.

The title of United Russia chairman is no badge of honor within the Russian political elite. Medvedev was handed the reins of the party in 2012 as a consolation prize for not being granted a second term as president at best—and the proverbial “poisoned chalice” at worst.

Beijing’s characterization was that these were discussions between the leaders of two parties and in no respects a government-to-government dialogue. Xi’s statements on the war in Ukraine, moreover, proclaimed no solidarity with Putin’s regime in the conflict and were more a declaration of neutrality than anything else.

The PRC “decides its position and policy based on the merits of the matter concerned, upholds objectivity and fairness, and actively promotes peace talks,” Xi said. “Hopefully, relevant parties will remain rational and exercise restraint, carry out comprehensive dialogue, and address joint security concerns through political means.”

Reasons for Xi not wanting the PRC to become a protagonist in the war have been clear for some time. The Chinese Communist Party boss has engaged in a balancing act where he maintains close relations with Putin personally, but he will not take any action to incur the wrath of the Western alliance that supports Ukraine—and, more significantly—the economic sanctions and negative reputational consequences that come with it.

What military assistance that has been provided to Russia has been carried out in such a way as to minimize any Chinese “fingerprints,” obscuring as much involvement by the PRC as possible. Military airlift flights taking place almost daily between Russia and the Chinese city of Zhengzhou are just one example.

The aircraft being used are the Soviet-era Antonov An-124 cargo carrier, the largest transport aeroplane in the world. Posts on Chinese social media conclude that the ammunition and other high consumption rate items in these shipments have to be shipped by air, as they are in such short supply that Russia’s military “cannot afford to wait for them to be delivered by rail.”

But the An-124s have also been switching off their transponders when they depart Zhengzhou so there is no electronic footprint of their return to Russia. A longtime analyst of the PRC told the Washington Free Beacon that “without this effort by the Russians to preserve plausible deniability on the part of Beijing—albeit little more than the proverbial ‘fig leaf’—these desperately needed cargo runs could come to an end.”

Given China’s reluctance to be identified as propping up Russia’s military, the question for Putin is how long he can count on Xi’s support.

When Medvedev met with Xi, he handed him a personal letter from Putin, which according to Chinese state media “conveyed the latter’s friendly greetings and best wishes to Xi.” The letter also “extended warm congratulations on Xi’s reelection as General Secretary of the CPC Central Committee and the outcomes of the 20th CPC National Congress.”

This statement immediately caused many to question why a letter of such benign and boilerplate verbiage had to be hand-carried and could not be transmitted through embassy channels like a New Year’s holiday greeting. Since what was billed as nothing more than a “meeting of two party leaders” was concluded that answer has been revealed—and it is not a hopeful sign for Putin.

According to Russian sources, the letter was the result of a “demand” (and not a request) previously issued from Xi that the Russian dictator provide details as to when and how he intends to conclude the war in Ukraine.

Specifically, the Russian president had been told “only if there were such written explanations or, if you like, promises,” would Xi be “ready to agree to telephone conversations with Putin and discuss the possibility of a visit to Russia next year.”

Xi had also reportedly “threatened to halt communications unless he received a response” he regarded as acceptable. In the balance hangs not only the question of the relationship between the two despots going forward, but also whether or not Xi would accept Putin’s invitation to come to Moscow in 2023. An official state visit by the Chinese leader would publicly telegraph the message of full-blown support from Beijing that Putin sorely needs.

“Xi asking for Putin’s endgame before agreeing to be a prop next to Putin on the podium in Moscow is an understandable demand,” said a longtime specialist on Chinese foreign policy. “Every day that this war continues is another day that Beijing risks being drawn further into the conflict. Xi sees no upside to becoming an active ally of Moscow along the lines of Belarus and no benefits. He only sees potential collateral damage to his nation’s interests.”

Rumors had also been swirling at the end of 2022 that contingency plans are being made in the event Russia’s internal situation becomes untenable and Putin and his entourage have to flee to some safe haven. Venezuela had been mentioned most frequently as the preferred option, but it is not clear if the politically fractured South American nation could shelter Putin against a united Western effort to later have him extradited.

Mark Galeotti, a U.K.-based analyst of Russia, has calculated the PRC is the sole country with adequate leverage in dealings with the West that it could not be forced to hand over a Putin in-exile for trial in The Hague. The lackluster former KGB functionary could only depend on Beijing in the event of this worst-case scenario. But that would require his relationship with Xi to be as firm as that between Zelensky and his U.S. counterpart, which it apparently is not.

Zelensky can still depend on the full-fledged support of his Western allies. This means more sophisticated weapons and the means to continue pushing Russian forces out of his country “for as long as it takes,” as more than one Western leader has pledged.

During an address by Putin late last year in Moscow on foreign and defense policy, two of his closest allies, Security Council secretary and former KGB official Nikolai Patrushev and FSB director Aleksandr Bortnikov could be seen dozing off. Other top generals were also seen struggling to stay awake. They seem to have lost interest in how the conflict is to be conducted.

The same Russian sources reporting on social media about the contents of Putin’s letter to Xi commented that these senior officials “nodding off during Putin’s speech are vivid confirmation of the futility of the event.” It may well have been a precursor to the equally futile effort to prevent Beijing and other of Russia’s onetime supporters from jumping ship.

Reuben F. Johnson is a defense and aerospace correspondent for Breaking Defense. He was formerly based in Kyiv and is now operating out of Warsaw.