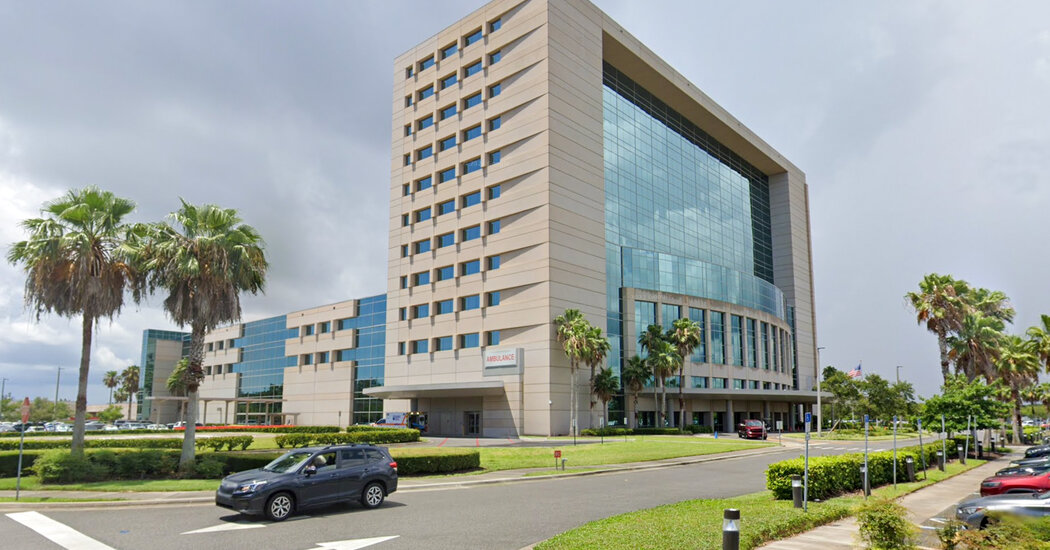 Jerry Gilland, a 77-year-old terminally ill man, made a pact with his wife about three weeks ago, the authorities said: If his failing health did not improve, he wanted his 76-year-old wife, Ellen Gilland, to kill him.

His health continued to decline, and so shortly before 11:30 a.m. on Saturday, Ms. Gilland brought a gun inside AdventHealth Hospital in Daytona Beach, Fla., went to Mr. Gilland’s room on the 11th floor and fatally shot him in the head, the police said.

She had planned to fatally shoot herself, too, but in the end, “she couldn’t go through with it,” said Chief Jakari E. Young of the Daytona Beach Police Department.

“It’s a tragic circumstance because it just shows that none of us are immune from the trials and tribulations of life,” Chief Young said at a news conference on Saturday.

Ms. Gilland confined herself to the room and refused to drop her gun when the authorities arrived, Chief Young said.

After an hourslong standoff, officers used a flash-bang device, which typically produces a bright flash and a loud noise, to distract Ms. Gilland, he said. Officers also used a bean bag gun to help take her into custody, Chief Young said.

“Even after the initial shooting, she never tried to get up and leave, so everything was confined to the room,” Chief Young said. “At no time were any of the hospital staff threatened, or any other patients.”

The shooting at the hospital appeared to shock emergency responders and created a logistical nightmare for officers and hospital staff members as they rushed to evacuate other patients on the floor.

Mr. Gilland had been the sole occupant of the room, the police said. They did not share specific details of Mr. Gilland’s illness or say how long he had been hospitalized.

Investigators said they were unsure how Ms. Gilland had managed to bring a gun inside the hospital, which did not immediately respond to a call seeking comment on Saturday. It was not immediately clear what kind of gun she had used.

But the police did say they were sure about one element of the shooting: It had been planned by the Gillands, of New Smyrna Beach, Fla.

Chief Young said it appeared that the couple had planned for Mr. Gilland to shoot himself, but he lacked the strength. “So she had to carry it out for him,” he said.

Ms. Gilland could face a first-degree murder charge, Chief Young said. The State Attorney’s Office in the 7th Judicial Circuit did not immediately respond to a call seeking comment on Saturday.

Ms. Gilland was taken to the Volusia County Jail on Saturday afternoon.

Ms. Gilland had been in a “depressed state,” he said, because she understood that Mr. Gilland was terminally ill and that the “end was near.”

If you are having thoughts of suicide, call or text 988 to reach the National Suicide Prevention Lifeline or go to SpeakingOfSuicide.com/resources for a list of additional resources.