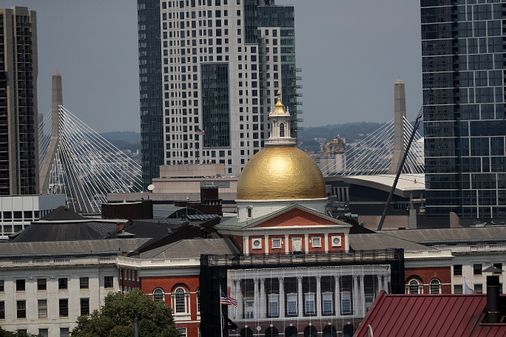 The Senate opened the door to major legislation last week, teeing up a bill that would make voting-by-mail permanent and institute same-day voter registration for approval on Wednesday. In the coming weeks, lawmakers are expected to release highly anticipated maps redrawing the state’s political boundaries, a decennial effort lawmakers say they must complete before the holiday break.

And months of weighing how to spend nearly $5 billion in American Rescue Plan Act, or ARPA, funding is likely to begin bearing fruit. Legislative leaders say they’re still discussing where to funnel it — a deliberate process that’s frustrated Governor Charlie Baker, who’s called on lawmakers to move much more quickly.

But House Speaker Ronald Mariano suggested lawmakers could appropriate roughly half of it now, with areas such as housing seeing a significant infusion, according to legislative officials.

“It’s an opportunity to get people to make decisions,” Mariano said of the next six weeks. In the same span two years ago, lawmakers completed a generational change to the school-funding formula, banned drivers from using hand-held cellphones, and set the country’s tightest restrictions on the sale of vaping products, among other laws.

“If we get half of them, we’re doing well,” the Quincy Democrat said of the current legislative agenda. “But you have to have goals.”

To be sure, the self-imposed deadline to wrap formal business by the third week in November is not a bill-killer; any unfinished work carries into 2022, when the Legislature’s full formal session ends July 31. But October and November are widely viewed in the Legislature as a pocket of time for moving major legislation before the next budget cycle begins. For others, it’s also a chance to get in potentially difficult votes well ahead of next year’s election.

House lawmakers, for example, are gauging whether they have enough votes to override a potential veto of a bill allowing people without legal immigration status to get Massachusetts driver’s licenses. It’s a sensitive issue that’s repeatedly failed on Beacon Hill before and has a high-profile opponent in Baker. Mariano, for one, said lawmakers have “a ways to go to solidify the count” of the 107 votes needed in the House to overcome a gubernatorial veto.

“It’s very much a matter of trying to get to consensus, whether something can get done,” said Representative William M. Straus, a Mattapoisett Democrat and House chairman of the transportation committee, where the bill currently sits. “I think members are fully aware the governor’s office has shown a strong antipathy on the issue.”

Yet, it’s also slowly won support among law enforcement officials and within the legislative ranks. Mariano and Senate President Karen E. Spilka, for example, have each publicly expressed interest in it, and it’s considered the House Progressive Caucus’s top priority.

“This bill has matured enough that people who are cosponsors of this bill are going to vote for it,” said Representative Tricia Farley-Bouvier, a Pittsfield Democrat and lead sponsor who expressed confidence it could pass. “There are not going to be people who get squirrely.”

The decisions about which bills move, however, likely won’t happen in a vacuum. Both the House and Senate have a variety of their own priorities that are awaiting, or would need, action by the other chamber to advance.

The Senate, for example, is primed to pass its sweeping elections bill this week, which includes elements the House has both supported (making expanded voting-by-mail permanent) and rejected (same-day voter registration). That a temporary measure to extend mail-in voting expires in mid-December makes movement on some type of bill in both chambers likely.

Spilka has also repeatedly said she wants to advance a bill addressing parity in mental health care, including policy changes to help bolster the state’s workforce in the field. The details, however, remain in the works.

“If there’s a really big issue, I think it deserves the attention of the Senate members, the public to see what it’s all about,” Spilka, a Democrat from Ashland, said in a phone interview. “I think it’s a big enough issue.”

The House, meanwhile, passed a bill legalizing sports betting in June, again kicking to the Senate an issue to which chamber leadership has long been cool.

Mariano has signaled he’s also eager to change the requirements for bidding on offshore wind contracts, though that bill, too, remains a work in progress.

Mariano and Spilka have had a largely congenial working relationship since Mariano was elevated to the speaker’s office last December. Many times, the Democratic leaders have moved in public lock-step to, for example, hustle a climate bill back to Baker’s desk or wrestle control of the federal stimulus money from the governor, showing a willingness to coordinate.

Some believe this could provide an opportunity for an issue like sports betting to emerge in the Senate.

“My sense is if or when [sports betting] happens, it’s going to happen as a result of a trade,” said one person with knowledge of Senate discussions. “They’re going to do the voting rights bill. They’re going to do a mental health bill. And then they have ARPA and redistricting, which either have to happen or are a mutual priority. That’s a lot to crowd in. You might see sports betting, for example, pop at the end of that — if the House does move something that the Senate really wants.”

Above all else, redistricting is the Legislature’s most pressing challenge. House candidates must live in their districts for a calendar year before competing in the November 2022 general election, meaning legislators intend to finalize the maps by early November.

In order to do that, and provide up to a week for a public commentary period, draft maps could emerge within two weeks, said Representative Michael J. Moran, the House chairman on the committee leading the effort. On Friday, Moran said that “right now,” it doesn’t appear the redrawn maps will pit incumbents against one other or require them to move, but he also wouldn’t rule it out.

“This is something you can’t push off into the second year of session,” Moran said of juggling the redistricting effort against other bills. “I don’t know why it’s sexy. I don’t know why people want to write about it or read about it. But it gets people interested.”