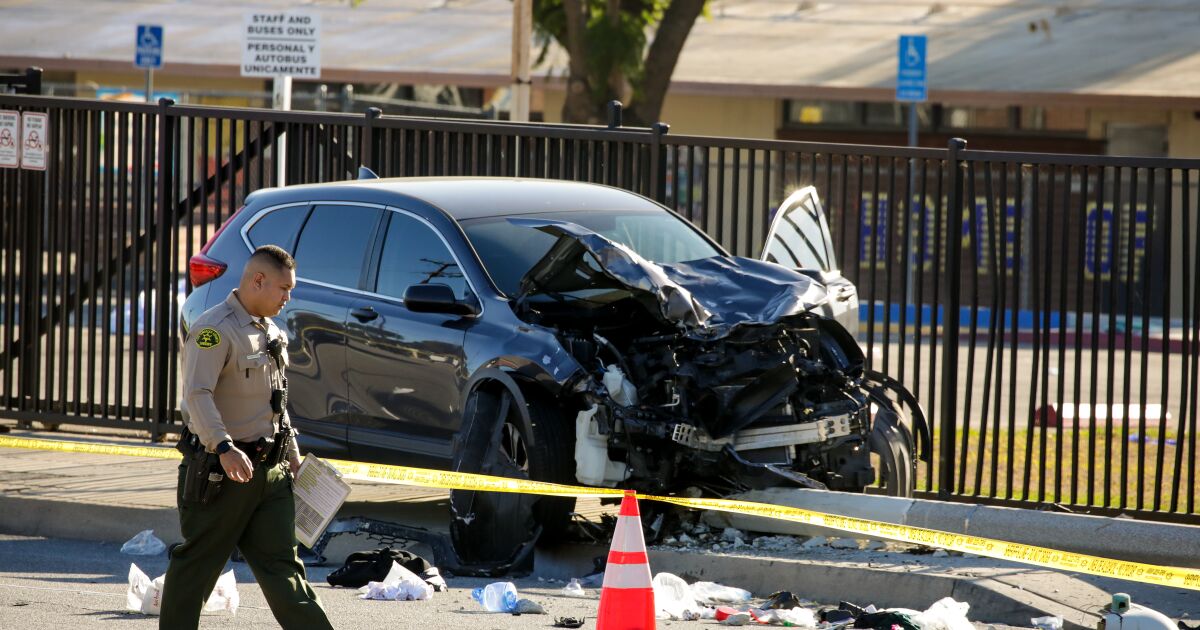 Five Los Angeles County sheriff’s recruits were critically injured Wednesday morning when a driver plowed into a large group during a run in Whittier, authorities said.

The crash occurred near the sheriff’s training academy, near Mills Avenue and Trumball Street, Deputy David Yoo said. The recruits were members of the STARS Explorer Academy.

Los Angeles County Fire Capt. Sheila Kelliher said 22 recruits were injured while out running when the crash occurred. It was not immediately clear how many were directly struck by the vehicle. Five were in critical condition.

The recruits were running along Mills Road when they were struck, Kelliher said.

Sheriff Alex Villanueva said the cadets typically run in group formation on streets, with road guards and following a vehicle. It was unclear whether they were wearing any high-visibility gear at the time of the crash.

“It made me just sick when I heard [about] it,” Supervisor Janice Hahn told KABC-TV. “I’m just hoping and praying that they all come through it.”

Video from KTLA-TV showed a dark-colored vehicle that appeared to be a small SUV on a sidewalk, its front end severely damaged. A downed light pole was lying on the ground in front of the vehicle.

More than a dozen ambulances responded to the scene, where firefighters had placed green, yellow and red triage mats, indicating the severity of injuries, video showed.

The 22-year-old driver of the vehicle was detained, authorities said. The vehicle was going the wrong way, Kelliher said. She had no information on the driver’s condition prior to the crash but noted his car knocked down one of the big light poles, “so there was some velocity there.”

The California Highway Patrol has taken over the investigation into the cause of the crash. The CHP’s multidisciplinary accident investigation team is beginning a forensic and technical examination of the scene.

“It does seem like this car did not slow down,” Hahn said.

The driver was also transported to a hospital for injuries, Kelliher said.

“I am shocked to hear that a driver plowed into a group of young sheriff’s Academy cadets during their morning training run,” Los Angeles County Supervisor Kathryn Barger said in a statement. “I’m tracking this incident closely. It’s senseless and tragic.”

This is a breaking news story that will be updated.