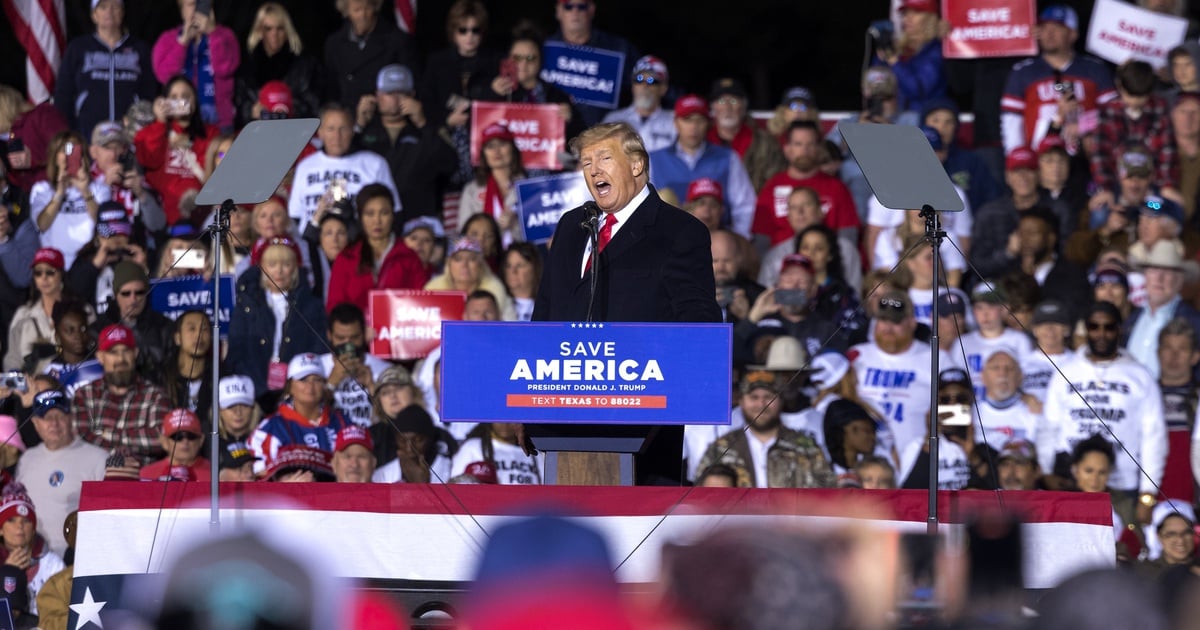 Texas Republicans, who have been some of Donald Trump’s most vocal supporters, had mixed reactions to the former president’s announcement that he will once again run for the White House in 2024 — reflecting a national mood of GOP apprehension toward Trump and the search for a potential other candidate to seek the nomination.

But the state’s two U.S. senators, Republicans John Cornyn and Ted Cruz, have signaled an openness to other GOP candidates, and Gov. Greg Abbott and other state officials, who were endorsed by Trump in their own elections, have yet to make a statement about Trump’s third bid for president.

Former Gov. Rick Perry, who served as Trump’s energy secretary from 2017 to 2019, did not immediately endorse Trump and said the GOP was early in the process of finding its nominee.

“For me personally, it’s kind of like, show me what you got,” Perry told The Texas Tribune on Wednesday. “Whether it’s Donald Trump, whether it’s [Florida Gov. Ron] DeSantis, whether it’s somebody that we haven’t seen yet.”

“I know how the process works, I respect the process and may the best person win,” he added.

Matt Rinaldi, chair of the Texas GOP, said he was also waiting to see what other candidates jump into the race.

“Contested primaries are a good thing,” he said. “Whoever wins the nomination will be a strong conservative and will take the party forward in 2024 in the right direction.”

Rinaldi said he has not closed the door to supporting Trump but has also been supportive of DeSantis.

“Ron DeSantis and his optimistic brand of bold and unapologetic conservatism is a winning brand and the GOP should take note,” he wrote on Twitter after DeSantis’ massive win in Florida on Election Day.

DeSantis is seen as a major potential opponent to Trump in the 2024 GOP primary, after a strong showing on Election Day where he defeated his Democratic opponent by 20 points on a night that Republicans nationwide underperformed.

Mike Pence, Trump’s vice president, has not closed the door to challenging his former running mate. Cruz is also seen as a potential presidential candidate, however, he’s declined to answer questions about how Trump’s announcement affects his aspirations.

A poll commissioned by the Republican Party of Texas this week showed that more Texas Republicans prefer DeSantis over Trump as their 2024 presidential nominee, which is a flip from their preferences in an October poll.

Trump has long been considered an easy front-runner for the nomination, but Republican apprehension has grown after the poor performance of Trump-aligned candidates in this month’s midterm elections. Some Republicans think the party could have won Senate seats and more governors if the party had run more traditional GOP candidates over Trump allies, who pushed election denialism, which turned off many voters.

Trump, who is the only president in history to be impeached twice, is also bogged down by his no-holds-barred, divisive style of politics, and his ties to the Jan. 6 attack on the U.S. Capitol by supporters who refused to believe Trump had lost the election.

Paxton, one of Trump’s staunchest allies, left no ambiguity about who he would be supporting on social media Wednesday morning. Trump supported Paxton in a competitive four-way GOP primary for attorney general this year.

“Donald J. Trump’s efforts to secure our borders, project strength across the globe, expand economic opportunity, & protect our freedoms put our nation back on track,” Paxton said. “I am proud to endorse his campaign for President so that he can once again put America First & heal our nation.”

Miller, who was also endorsed by Trump and was one of the first Texas officials to support Trump’s 2016 presidential run, also remained supportive.

“I was the first elected official to endorse him. I think I endorsed him last January,” Miller said Wednesday morning in a phone interview. “I was in before he was.”

Lt. Gov. Dan Patrick, who chaired both of Trump’s Texas campaigns, also praised Trump on Tuesday night but his statement was not a clear endorsement.

“President Trump is the candidate the Democrats fear the most in 2024. If you heard his speech tonight, you know why. It was one of the best he has ever given,” Patrick said. “After two more years of President Biden and the leftist policies of the Democrats, Americans will be ready for America to be Great Again.”

A Patrick spokesperson did not immediately respond to a request for clarification, but Patrick has expressed clear support for Trump in the past, introducing him at a Conroe rally in January as the “45th and soon-to-be 47th president of the United States.”

U.S. Rep. Troy Nehls, R-Richmond, was among Texas’ first Congress members to endorse Trump on Tuesday night from Mar-a-Lago, where he witnessed the announcement in person.

“My friend Donald J. Trump has my complete and total endorsement for president in 2024,” the Richmond Republican said on Twitter.

U.S. Rep. Ronny Jackson, R-Amarillo, who served as Trump’s doctor in the White House, was emphatic in his support.

Still, there was a notable lack of enthusiasm from Abbott and other statewide officials, including Land Commissioner George P. Bush, who heavily sought out Trump’s endorsement during his failed challenge to Paxton for the attorney general’s office. House Speaker Dade Phelan, who Trump attacked for not pushing forward an election audit bill during the 2021 legislative session, has also remained quiet. None immediately returned requests for comment.

Even some of Trump’s staunchest supporters noted the unease around his announcement. Miller said Trump has had some recent drops in polling support and took some tough losses by his endorsed candidates in the midterm elections.

But he said Trump had plenty of time to recover and anticipated he’d have an easier route to the GOP nomination than in 2016.

“It’s like they say in billiards. There’s a lot of green between here and the pocket,” Miller said. “He’s still in good shape. The polls switched on him for a bit but he’ll be back.”