The former president returned to his Florida estate on Sunday, with thoughts of dirty carpets keeping him up late into the night

Former President Donald Trump railed against the FBI agents who seized hundreds of classified documents from his Palm Beach residence in a late-night rant following his return to Mar-a-Lago.

“Arrived in Florida last night and had a long and detailed chance to check out the scene of yet another government ‘crime,’ the FB’s Raid and Break-In of my home, Mar-a-Lago,” Trump posted on Truth Social early Monday morning, “It was ‘ransacked’ and in far different condition than the way I left it. Many Agents- And they didn’t even take off their, shoes in my bedroom. Nice!!!”

The former president lamented that “after what they have done, the place will never be the same.”

Trump spent the weekend campaigning in Ohio, where he held a rally in Youngstown, Ohio. He added in a separate post that he was thankful to the “many people” who greeted him at the airport on his way out of town. He was also greeted by throngs of his supporters upon returning to his Palm Beach golf course.

Trump is currently being investigated by the Department of Justice for possibly violating the Espionage Act, spurred by claims brought forth by the National Archives that Trump had absconded from the presidency with hundreds of classified documents that should have been turned over to archivists. 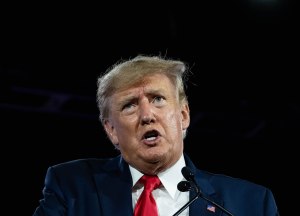 The Mar-a-Lago raid has resulted in a myriad of accusations by Trump against the FBI, including claims that agents rifled through former First Lady Melania Trump’s drawers, broke locks, and planted evidence. Trump has suggested he might release security footage of the raid to prove that the FBI was up to no good, but so far has failed to do so.

On Friday night, Fox New host Sean Hannity questioned Trump lawyer Alina Habba regarding the possibility of the public seeing the footage. Habba, who recently settled a lawsuit from a former employee alleging racist behavior, assured viewers that Trump “cares about the agents” and their safety. “We don’t leak, we follow the rules,” Habba said of Trump’s team.

It’s unclear if that directive has been relayed to Trump.