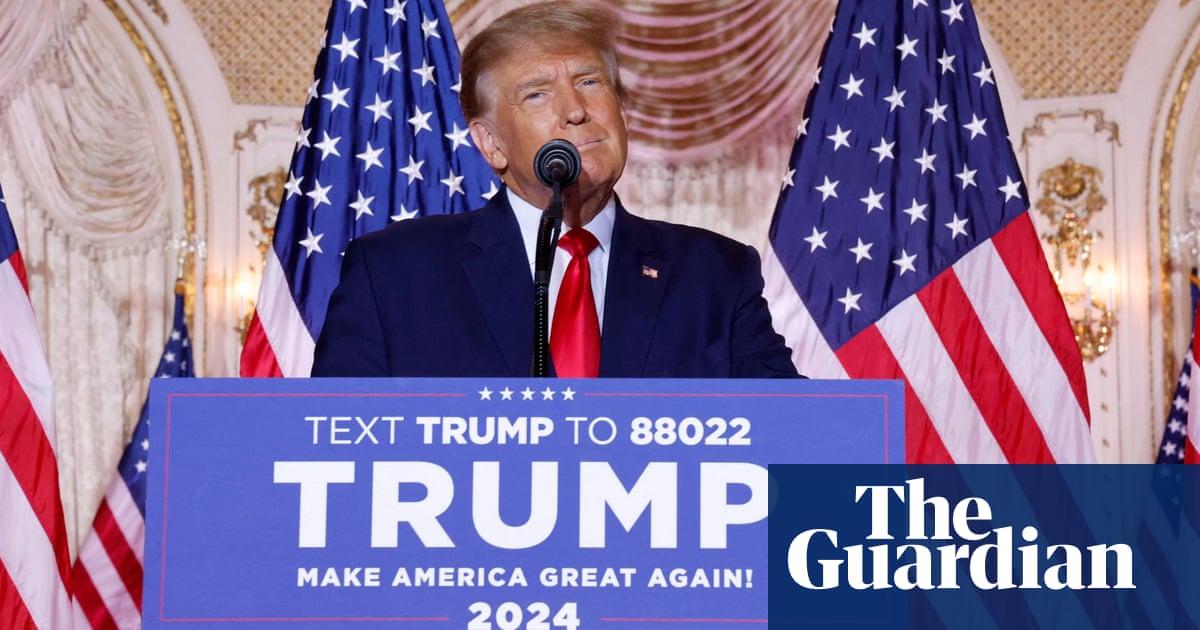 The law is clear. The politics less so.

If Donald Trump’s third run for the White House is propelled by large doses of narcissism and revenge, the former US president must also be hoping that a high-profile political campaign may help keep his myriad legal problems at bay before they bury him.

Prosecutors from New York to Georgia and Washington DC have spent months digging into an array of alleged crimes before, during and after Trump was president. Some of those investigations are coming to fruition with indictments expected to follow within months, possibly weeks, on charges that potentially could see Trump become the first former US president to go to prison.

His declaration that he is once again a candidate changes nothing under the law. Legal minds broadly agree that while a sitting president is protected from prosecution in office, that immunity disappears when they leave the White House.

But then there is the politics of a prosecution against a presidential candidate who has already dismissed the investigations of his attempts to overturn the 2020 election, the hoarding of top secret documents, and allegedly fraudulent business practices, as “politically motivated” and a Democratic “witch-hunt”.

Donald Ayer, a former US deputy attorney general under President George HW Bush, said the political element will weigh on prosecutors only to the extent that it affects their ability to persuade a jury to convict him.

“Donald Trump declaring his candidacy certainly doesn’t make his prosecution legally impossible or inappropriate, but its impact on the prosecution’s success must be considered. One ultimate judgment the justice department must make – it is specifically set out in the justice manual – is whether it is probable that they can convict by proving their case beyond a reasonable doubt,” he said.

“Ultimately, I don’t think that the confusion and uncertainty that Trump is trying to generate with this step will end up being a reason that the government declines to go forward. It is just one more effort to mislead people, and it does not change the extent of his culpability or the urgency of holding the worst perpetrators of these crimes accountable.”

Still, justice department officials have discussed whether to appoint a special counsel to take over the Trump investigations in order to head off accusations that any criminal charges are politically driven because the attorney general, Merrick Garland, was appointed by a Democratic president, Joe Biden. But even then the special prosecutor would ultimately answer to Garland.

It is just one more effort to mislead people

There is plenty of precedent for prosecutors to investigate and indict election candidates. Trump’s opponent in 2016, Hillary Clinton, was under investigation by the FBI through the primaries and again in the days before the general election over her use of a private email server.

Candidates can even run with a prosecution hanging over them. Last week, a Trump-backed Republican won a seat in the Texas legislature while under indictment for impersonating a public servant.

Four years ago, several candidates won seats in Congress while facing criminal charges. They included two Republicans, Chris Collins of New York and Duncan Hunter of California. Collins later pleaded guilty to insider trading and resigned his seat. Hunter admitted using campaign funds on extramarital affairs and also gave up his seat although he was saved from prison by a pardon from Trump.

Texas attorney general and Trump loyalist Ken Paxton has been re-elected twice while under criminal indictment for securities fraud but the trial has been repeatedly delayed.

The justice department has a practice of not bringing criminal charges against a candidate within 60 days of an election, but it’s not written into law. The way the criminal investigations against Trump are unfolding, he faces the prospect of multiple trials long before the 2024 presidential election reaches its climax.

Federal investigators are building a case against the former president for keeping classified documents, including some marked top secret, at his Mar-a-Largo mansion in Florida after leaving the White House. The potential charges include breaches of the espionage act and obstruction of justice.

The justice department is also investigating Trump’s attempts to overturn the 2020 presidential election results and his part in instigating the 6 January 2021 storming of the Capitol in Washington.

Ayer said he expects both investigations to result in charges.

“Of the two federal investigations, I think the one that focuses on the outright stealing of the election is the most important one. What’s at stake there is hard to overstate. But the documents case is also very serious because of the national security considerations. Because it is narrower and less complicated to prove, it could be ready for prosecution sooner,” he said.

Trump is also facing the threat of serious charges by a local prosecutor in Atlanta, Georgia. The Fulton county district attorney, Fani Willis, has assembled a “special purpose grand jury” that has spent months focused on Trump’s multi-faceted attempt to turn defeat into victory by pressuring officials to overturn his loss in the key swing state.

Willis has been building a substantial body of testimony from some of Trump’s closest allies and Republican officials who witnessed the defeated president’s actions. They include the Georgia secretary of state, Brad Raffensperger, who was questioned about a call he received from Trump demanding that he “find” enough votes to erase Biden’s victory.

Ronald Carlson, a leading Georgia trial lawyer and professor at the University of Georgia’s law school, said the Fulton county investigation “continues to be the most dangerous threat” to the former president.

“President Trump continues to denigrate and dismiss this as political theatre. It would be a serious mistake to underestimate what’s going on. It seems to me highly likely this grand jury will report that criminality occurred and we should not be surprised to see an indictment. Remember, Georgia is the only place where the president himself is on tape saying to the [Georgia] secretary of state, ‘Brad, please find me 11,780 votes.’”

Carlson does not think the state attorney general’s office will be deterred by political pressure from charging the president, possibly early next year.

“They’ve given no sign up to this point of being afraid, and I don’t think they will be,” he said.

Carlson believes Willis, a Democrat, is building a case with overwhelming evidence against Trump so that it cannot be dismissed as political. She also needs a watertight case to persuade a jury in a largely Republican state.

Ayers said Garland is equally determined to press ahead with charges if the evidence is there.

“I believe that the attorney general is highly motivated to secure accountability at the highest levels it can be proven, and to do so as soon as reasonably possible, consistent with assembling a strong case showing guilt beyond a reasonable doubt. He knows that a failure to achieve a high degree of accountability, meaning criminal prosecution, will send a bad message that the United States of America can’t be counted on to enforce its laws prohibiting these most serious offences of all against the country,” he said.

Charges are one thing. Getting to a trial, and securing a conviction is another.

Even if Trump is charged, could his lawyers stall any trial until he once again has immunity as president, as he hopes? Debra Perlin, a former Department of Homeland Security attorney who is now policy director for Citizens for Responsibility and Ethics in Washington, says not.

“Let’s be honest, Trump has played a delay game from the very beginning on every challenge that’s come his way. But I don’t think that they are able to delay those trials. Although I’m sure that there would be a lot of pre-trial filing that his team would make, we are far outside of them being able to delay up until the election,” she said.